How to deal with toxic co-workers and their drama

Experts reveal how to deal with toxic co-workers.(Photo: Youtube screengrab)

John says, "You'll never make it in this business". Lisa always finds a way to throw her weight around. Wendy takes credit for my ideas.

Whether it is the job of your dreams or a means of putting food on the table, working with people can be a rough challenge sometimes. You encounter people who, for whatever reason, can drive you up the wall and hinder you from thriving in the workplace to reach your full potential.

In such moments, you'd think this type of toxic co-worker was invented in your office, but this is a worldwide phenomenon experienced by millions on a daily basis. What is a toxic co-worker? Kevin Kelloway, Professor of Management and Psychology at Saint Mary's University describes them as "people who do things that affect our well-being.”

"So behaviours such as negativity, making fun of people, intimidating others are all characteristic of toxic workers," Professor Kelloway revealed.

Not everyone is going to be your best friend and that is okay. But when it bleeds into your work and starts affecting your psyche, you know you have a problem. Suddenly going to work becomes more about the dreadful task of dealing with someone insufferable rather than the actual job.

A recent survey by Fierce Conversations, a training company that teaches one how to have effective conversations, found 40% of people believe their organisation does nothing once made aware of toxic individuals and negative attitude is cited as the most detrimental to employees. Stacey Engle, EVP at Fierce Conversations revealed, "Over two-thirds wish their employers were less tolerant of these individuals".

But quitting isn't an option in many cases. Jamie Gruman, Associate Professor of Organizational Behaviour at the University of Guelph feels “difficult people are almost inevitable”, so learning how to deal with them is a better solution than running away from the situation.

Understanding the motive for such bad behaviour is the first step in reducing the toxicity in a working environment. "Sometimes people are difficult because they have needs or desires they're trying to satisfy," Professor Gruman shared. Engle agrees and feels the effect of a toxic employee can trickle down throughout a team. "All of the distraction this type of employee causes affects productivity," Engle explained.

Experts weigh in on the motive of a toxic co-worker and provide helpful strategies you can use when dealing with them.

MILLION DOLLAR QUESTION: WHY SO TOXIC?

So before you decide to turn your negative circumstance into a positive one, we always ask why? Why does he/she behave this way? Why do I attract these types? Well, it may not be you. Professor Gruman believes such people are "manipulative and strategic", while Professor Kelloway said they have a high sense of self-importance. "Moreover they often have a sense that they are untouchable – that organisational rules and norms don’t apply to them and that they can get away with these behaviours because of their position or contribution to the company,” he explained.

Getting worked up about the individual is playing right into their hands as Professor Kelloway points to two motives. "First, toxic individuals might actively sabotage or undermine your efforts – this is a typical bullying behaviour with the intent of impeding your productivity (e.g., so that you will be in trouble or disciplined)," he explained.

"Second, the more time you spend worrying about or pre-occupied with the individual and their behaviour the less time you are spending at your tasks – this is a form of presenteeism – you are at work but not really focused on work - again resulting in decreased productivity,” he added.

Tom Anastasi, Adjunct Assistan Professor of Organizational Behaviour at Boston University describes the type of toxic type of co-workers you may have encountered: 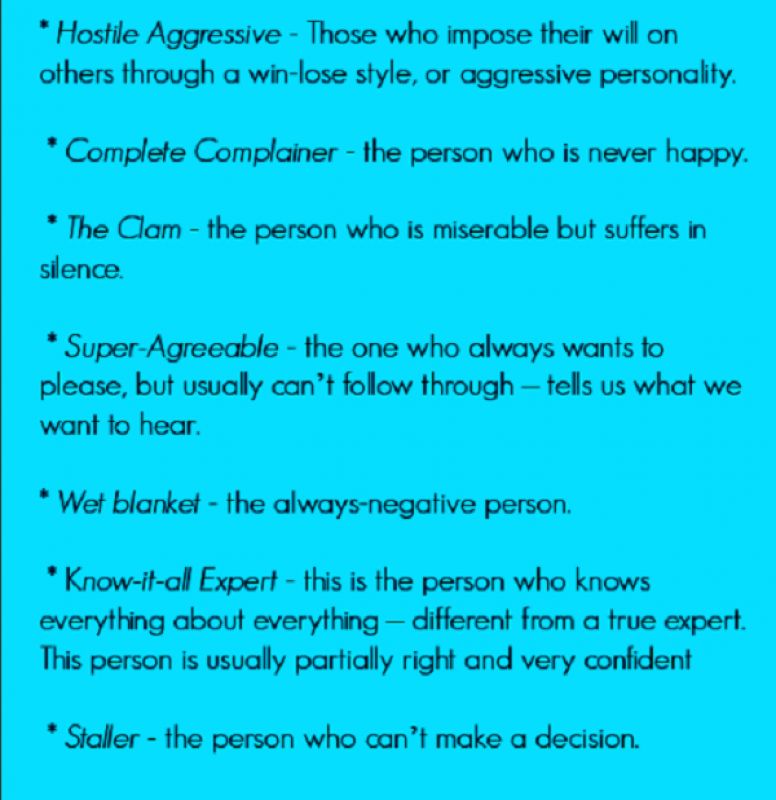 HOW TO COPE AND THRIVE IN THE WORKPLACE

Professor Anatasi assures that difficult people can be managed and suggests strategies for two scenarios in the workplace. If the person dominates a meeting and is always using force of will to advocate their ideas, get everyone's opinion on the topic being discussed. If the toxic person tries to interrupt, then say: “Hold on – we want to hear from everyone.”

“The toxic person will hate having everyone talk, but that will lead to a much more productive meeting – it’s an effective use of the power of the group," Professor Anatasi explained. When the toxic co-worker tries to throw their weight around or say something unproductive, say: "Really? Do you really mean we should do that or is that a conversation starter?"

Professor Gruman recommends the strategy of containment. “You develop strategies that target the co-worker's toxic behaviour and try to limit their influence,” he advises. For example, contain overbearing and domineering colleagues by employing a rule where nobody speaks unless they are holding the 'speaking pen'.

Professor Kelloway suggests surrounding yourself with supportive individuals and avoids getting trapped into interactions with the toxic person. “It's really a strategy of active avoidance and self-protection," he elaborated.

When it comes to confronting a toxic co-worker, Engle believes you should have a straightforward and honest conversation with them. "If an employee is dealing with a toxic employee, the first thing they should do is address them directly,” she said.

However, Kelloway feels it will only add fuel to the fire and wouldn't recommend it due to the individual's behaviour: "Unfortunately there is little truth to this strategy as often the perpetrators have a very strong ego and that is why they behave badly in the first place," he believes.

Nevertheless, all the experts agreed, if things get worse it is important to get management involved and provide facts about how this individual is affecting your ability to do your job. The most important thing to remember is to put the focus back on you and your goals. "You cannot control other people, only how you react to them," Engle added.

Mums who live the Spartan way