The infant was born with a congenital disorder, which occurs because of mutation in the genes. (Photo: Deccan Chronicle)

Nagpur: In an extremely rare case, a baby girl with a severe congenital disorder and near-total missing external body skin, was born at a city hospital in the wee hours today.

In medical parlance, this condition is called Harelquin Ichthyosis.

A young woman gave birth to the baby girl at the Lata Mangeshkar Medical College and Hospital around 12.30 AM. A team of doctors, including Dr Yash Banait, Dr Prachi Dixit, Dr Meenakshi and Dr Nilofar Mujawar, were involved in the delivery.

"The infant was born with a congenital disorder, which occurs because of mutation in the genes. The overall incidence of Harlequin Ichthyosis is one in three lakh births," said noted obstetrician and gynaecologist Dr Avinash Banait. 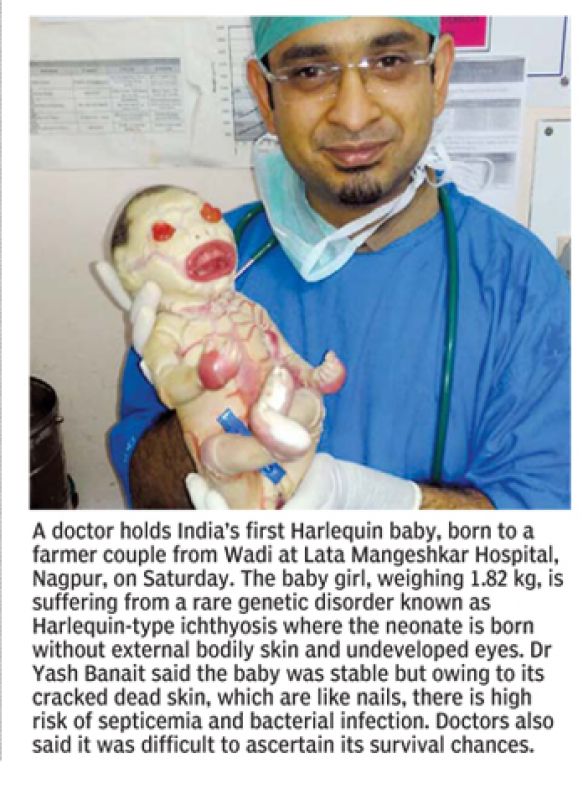 "Harlequin ichthyosis is a very rare severe genetic skin disease, which causes thickening of the stratum corneum of the epidermis. In such cases, the child's whole body is encased in an 'armour' of thick white plates of skin, separated with deep cracks. In addition, the eyes, ears, private parts and the appendages may be abnormally contracted," he said.

Because of resultant cracked skin in locations where normal skin would fold, it is easily pregnable by bacteria and other contaminants, which can result in serious risk of fatal infection, Dr Banait added.

The baby, born after a Caesarean operation performed by Dr Dixit, has now been kept under observation as constant care is required to moisturise and protect the skin.

"Doctors will be undertaking a 2D Echo investigation to ascertain the cardiac deformities or anomalies if any. The baby requires proper moisturisation and petroleum jelly and coconut oil serves good for this. Nutritional rehabilitation has to be undertaken regularly. But this baby is not finding any difficulty in breathing," he said.

According to Dr Banait, the disease can be diagnosed in the uterus by way of fetal skin biopsy or by morphologic analysis of amniotic fluid cells obtained by amniocentesis.

Doctors can now usually recognise common features of the disease through ultrasound and follow up with 3D ultrasound to diagnose the condition.