Abortion rate at historic low in rich nations, steady in poorer ones

The new global and regional estimates of abortion incidence from the Guttmacher Institute and WHO suggest that restrictive abortion laws do not limit the number of abortions. (Photo: Pixabay)

Washington D.C.: The rate of abortions in the developed countries has dropped to an all-time low, but has remained unchanged in the developing regions, according to a recent study.

The new global and regional estimates of abortion incidence from the Guttmacher Institute and WHO also suggest that restrictive abortion laws do not limit the number of abortions.

Lead author Dr Gilda Sedgh said that in developed countries, the continued fall in abortion rates is largely due to increased use of modern contraception that has given women greater control over the timing and number of children they want. 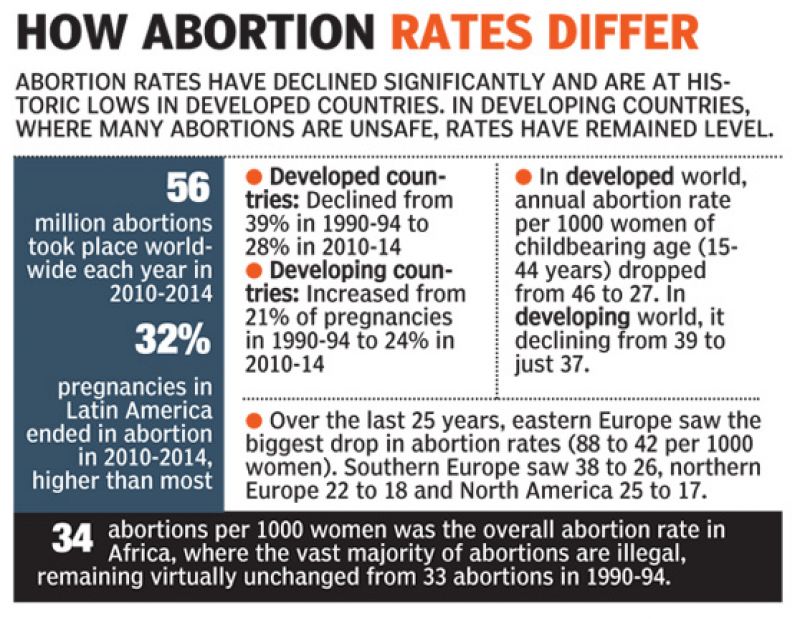 Sedgh added that in developing countries, however, family planning services do not seem to be keeping up with the increasing desire for smaller families. More than 80 percent of unintended pregnancies are experienced by women with an unmet need for modern methods of contraception, and many unwanted pregnancies end in abortion.

The study used abortion data from nationally representative surveys, official statistics, and other published and unpublished studies, along with information on the level of unmet need for contraception and the prevalence of contraceptive use, by type of method. The researchers used a statistical model to estimate levels and trends in abortion incidence for all major world regions and subregions from 1990 to 2014.

Between 1990 and 2014, the developed world's annual abortion rate per 1000 women of childbearing age (15-44 years) dropped from 46 to 27, mainly as a result of the rate in Eastern Europe more than halving (88 per 1000 women to 42) as modern contraceptive methods became more widely available. However, in the developing world the abortion rate has remained virtually unchanged, declining from 39 to just 37. Worldwide, on average 56 million abortions took place each year in 2010-2014.

The authors note that the new estimates override previous global estimates from 1995, 2003 and 2008. Because of the limited availability of data on abortion in developing countries, the estimates in these regions have wide measures of uncertainty.

Co-author Dr Bela Ganatra said, "The high rates of abortion seen in our study also provide further evidence of the need to improve and expand access to effective contraceptive services. Investing in modern contraceptive methods would be far less costly to women and society than having unwanted pregnancies and unsafe abortions."

The study appears in The Lancet.