Brand Name Cacit of one firm is Capecitabine ( used for colon cancer treatment ) while other brand contains Calcium ( used for calcium deficiency or as antacid).

While inaugurating a multispecialty charitable hospital in Surat in Gujarat on April17, Prime Minister Narendra Modi announced that the Centre intended to ensure that doctors prescribe medicines by generic name only as they are cheaper than respective branded medicines. He also said doctors write prescriptions in a way that the poor do not understand their handwriting and end up buying costly medicines from private stores, while quality generics are available at lower costs.

“We will bring in a legal framework by which if a doctor writes a prescription, he has to write generic names in a legible manner”, said Mr Modi.

The very next day the Union Ministry of Health and Family Welfare wrote to all states and union territories mentioning that   every physician should prescribe drugs with generic names legibly and preferably in capital letters.

Prescribers shall also ensure a rational prescription and use of drugs.  All states and union territories initiated steps in tune with the directive.

On April 21, the Medical Council of India directed the medical community to follow its 2016 notification amending clause 1.5 of the Indian Medical Council (Professional Conduct, Etiquette and Ethics) Regulations 2002 mandating doctors to prescribe medicines by generic names in place of brand names.

MCI warned doctors that if they fail to comply with guidelines or violate clause 1.5 of Ethics Regulation, suitable disciplinary action will be taken by the respective State Medical Council or the MCI.

Each medicine has at least three names- chemical name, generic name and brand name (see Table). Rarely medicines are also known by Code number which is an intermediate designation staying with its initial laboratory investigations.

WHO-approved abortion pill mifepristone was introduced under its code number ‘RU 486’ first in France in 1987 and then in other parts of the world.  RU 486 became more popular than its other names.

Chemical name of the drug is based on its chemistry or structure and is mainly used in advanced education and research areas.  It may not be user friendly to remember or handle by general public.

Generic name is a shortened, popular and easy-to-remember name of a drug. It is the international non-proprietary name (INN) and generally simple, easy to recognise and recall.

Brand name, also known as trade name, is a proprietary, fancy, business name given by manufacturers to distinguish their products from others. It relates entirely to the finished product with its own flavour, colour and taste with unique packing and labelling style.

Newly discovered products in market economies are generally sold by brand names. Through advertisement, marketing and sales blitz, manufacturers promote and popularise brand names in such a manner that even the scientific community may often be confused between generic and brand names.

As in the case of gentamycin (generic) and garamycin (brand) or dexamethasone (generic) and dexona (brand), it is often difficult to distinguish certain generic and brand names as   brand name is a shortened version of generic name. 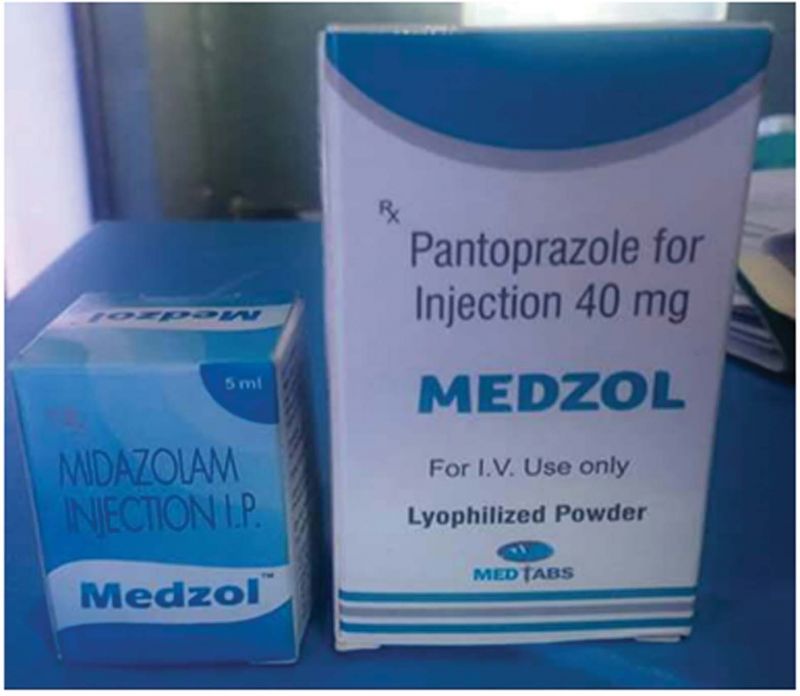 Brand Name Medzol of one firm is Prantoprazole ( used for acidity) while other brand contains Midazolam ( used for seizures and insomnia).

Branded medicines are costlier, compared to generic. In USA, Canada, and UK, generic drugs cost 20- 80 percent less than their brands. Studies indicate that the price variation ranges between 30 and 200 per cent or more in India.

One generic drug may have hundreds of manufacturers and brand names in India. 1,840 brands of paracetamol, 1,255 brands of ofloxacin and 1,249 brands of amoxicillin available in Indian pharmaceutical market on the website of Drugsupdate.com  (http://www.drugsupdate.com/brand/showavailablebrands/93/63).

Can any Indian doctor remember so many brands? However, all brands are being prescribed by different prescribers.

There are also instances where different generic medicines are given same brand names by different manufacturers causing serious health issues and hazards.  Sometimes different branded products containing same or similar active ingredients are prescribed to patients resulting in over dosage and consequent toxicity.

Generic name is followed by World Health Organisation (WHO) and various countries. Rarely some countries may opt their own generic names for certain drugs and a classical example is paracetamol which is more known by the name acetaminophen in USA. Some countries have their own official body for assigning generic names to drugs.

Generic name is the ‘official’ or ‘real’ name of a drug and is followed by all government departments, offices and agencies. WHO always bats for generic prescribing as part of its strategy to ensure rational medical treatment and prescriptions suitable to local needs.

Health insurance companies, both private and government, always   promote generic drugs and require substituting a generic for a branded prescription.

In countries like USA, insurance plans also require the patient to pay the entire cost of brand name drug if he/she does not accept available generics.

(Author is the former head of clinical pharmacy at Thiruvananthapuram Medical College.) 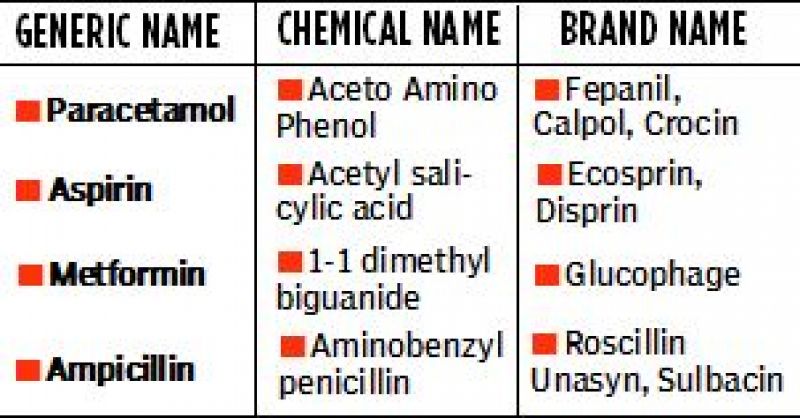 About 90 pc generic drugs in market are branded

When a new drug is introduced, it is always marketed under a brand name by the original firm and will be a monopoly item till the end of the patency period.
Once the patency period is over, other firms can also manufacture and market the drug either in generic (INN) name as such or under their own brand names.
If the manufacturer uses brand name along with the generic name, such products are known as branded generics. In other words if the generic drug is marketed under a brand name, it becomes branded generic.

Branded generics are costlier than generics and doctors prefer them.
Brand names are used for marketing large number of irrational formulations including combinations in the market. The Centre is in the process of replacing branded generics with generics through its new drug policy.

The Drugs Control department shall function as the watchdog to ensure the quality of medicines manufactured and marketed in the country. It is true that the existing 1600 officers of the department are not sufficient enough to manage existing pharmaceutical units in the country. What is more important   is to make the existing and available system efficient and effective utilising modern concepts and innovations. Drug sampling and testing methods are outdated.

The system warrants necessary modifications and effective scientific approaches.  If manufacturers are directed to upload the test reports of each batch of their medicines on websites / e-portals before being released for sale or use, it will help to ensure better quality. Severe punishments should be given to those responsible for marketing spurious and not of standard quality medicines.
Offices of the drug inspectors should be modernised and each inspector/officer shall be a drug researcher. The drugs control department of each state shall also function as a centre for training and research on matters related to drugs, including policies and regulations.

The qualification for drug inspectors and higher officers shall also be necessarily re-prescribed with this perspective. Officers shall be encouraged for higher specialised qualifications, including doctoral/ PhD  programmes.

Barcode is an optical and machine-readable form of data used to identify objects. Barcodes are used in many retail items in the market. Though the Indian Pharmaceutical industry is very much developed, bar coding is yet to be popularised in pharmaceutical products marketed in the country.

In the background of complaints of spurious medicines from India reaching international markets, the Commerce Ministry    in 2012 made it mandatory for pharmaceutical exporters to have barcode and track and trace system for tertiary and secondary packages of medicines exported from the county.

In 2015 the Health Ministry also initiated the development of   a mechanism for tracking medicines for their safety and authenticity in the Indian market. The Government is still working to create an integrated data base with all details of products, including batch number, date of manufacture, expiry details and retail price which will enable authorities to track and monitor medicines manufactured and marketed in India.

Since 1980 the US- FDA publishes Orange Book regularly. It is a publication of approved drug products with therapeutic equivalence evaluations.

This book helps to identify drug products approved on the basis of safety and effectiveness. The publication of a drug product in Orange Book is a warranty that it is equal to similar items of other firms listed in the book.

Work from home is a potential health hazard, warn experts