The heroes of public healthcare in India

Mumbai: The agenda for the global health awareness day or World Health Day 2019 is ‘Universal Health Coverage’, making healthcare services affordable and accessible for all. In India, the government through its initiative – ‘Mission Indradhanush’, has significantly increased the immunisation coverage across states and districts, making life-saving vaccines accessible to pregnant woman and children in the country. The real force working towards achieving this target efficiently are the community health workers. They are the unsung heroes of healthcare in India, making immunisation possible even in the most far-flung areas of the country.

The Measles Rubella (MR) campaign of the Ministry of Health and Family Welfare (MoHFW) is underway in Assam where all children between the ages of 9 months- 15 years are given this vaccine. A shot of this vaccine prevents the two diseases measles and rubella by the efforts of teams of health workers, mostly consisting of women.

Popularly known as gateway of western Assam, the historic town of Dhubri is often referred as the ‘land of rivers’. To reach these communities living in the ‘chars’ for immunisation is extremely challenging but that does not deter the dedicated ASHA health workers here. Practically no roads exist in these areas and even boats are not available. The only way to cross the waterbodies and wetlands is either on foot or with the help of makeshift rafts and bridges made with jute, bamboo and banana trees. The teams traverse the rough terrain, carefully carrying the distinct ‘blue boxes’, insulated vaccine containers that ensure safe storage of the vaccines. 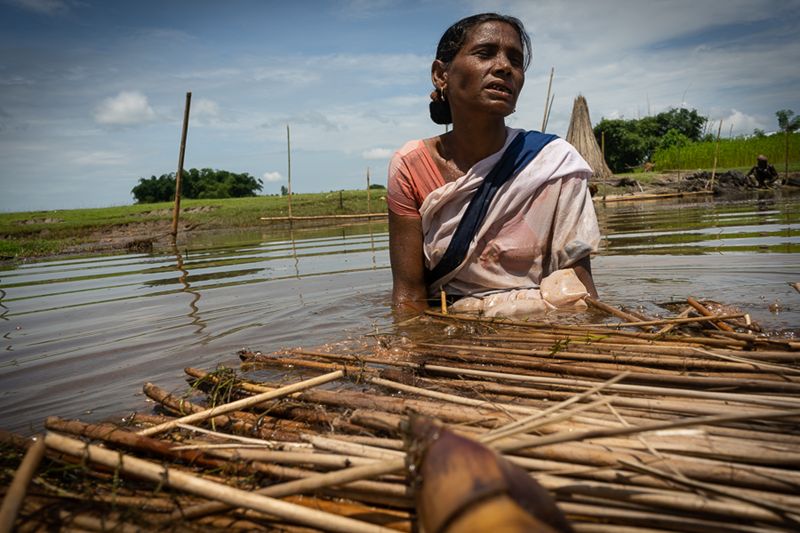 ASHA Abaron Bibi, is the only person who ferries the ASHA team across the wetland, all by herself in extremely hot and humid conditions in Golakganj, Assam. (Photo: MoHFW)

The ASHA team here consisting of workers like Manibala Roy and Abaron Bibi are expectionally dedicated to the cause of immunisation and improving the quality of life of the people of their area. Abaron Bibi, manually ferries the ASHA team across the wetlands on makeshift rafts, each time the ASHA team visit her side of Golakganj. Abaron is the only person who can do so and she as sincere and hard-working as one can expect a community health worker to be. “It’s my village and I’m the ASHA. If I refuse, then who else will do this?”, replied the shy widow and mother of five. 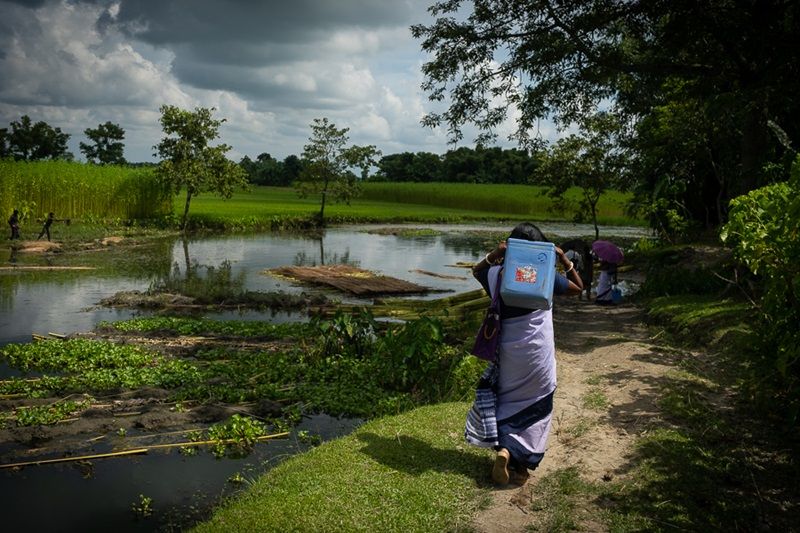 The ASHA workers continue towards remote areas without a break, wading through waterbodies and shifting the weight of the 'blue boxes', vaccine carriers from one shoulder to another in Dhubri, Assam. (Photo: MoHFW)

The team of dedicated Auxiliary Nurse Midwifes or ANMs, village level female health workers in India as well as the ASHA workers of this area are a brilliant example of how women empowerment can translate into better healthcare for all at the grassroots level in India. They reach out to even the remotest regions of Assam, carrying out immunisation, mobilising communities and saving millions of lives from premature deaths.

Another heroic tale is of the feisty duo from Malana, Kullu district of Himachal Pradesh. The massive mountains of the region are no match to the determination of ANM Meena Kumari and ASHA Nirma Devi. Situated at an altitude of 8,701 feet (2652 meters), Malana is an ancient village, nestled among the lush green forests and the snowcapped mountains of the Parvati valley. With a total population of only 1935 and 220 households, Malana is isolated from the rest of the world. For the district immunisation officials of Kullu, Malana remained outside the ambit of immunisation as no one was willing to travel to it.

In April 2015, Meena Kumari joined as the ANM in Pini sub-centre. Undeterred by the geographical toughness of the Malana, she set forth on the mission to immunise the children of Malana. Since no Alternate Vaccine Delivery (AVD) was possible due to the hilly terrain, Meena had to carry the vaccine carriers from the cold chain point of Jari CHC, 40 kilometres away from Malana all by herself. Literally taking the road less travelled, partly by public transport and partly on foot. Meena never failed to conduct a session at Malana, even during the winter season when the region received the heaviest snowfall. 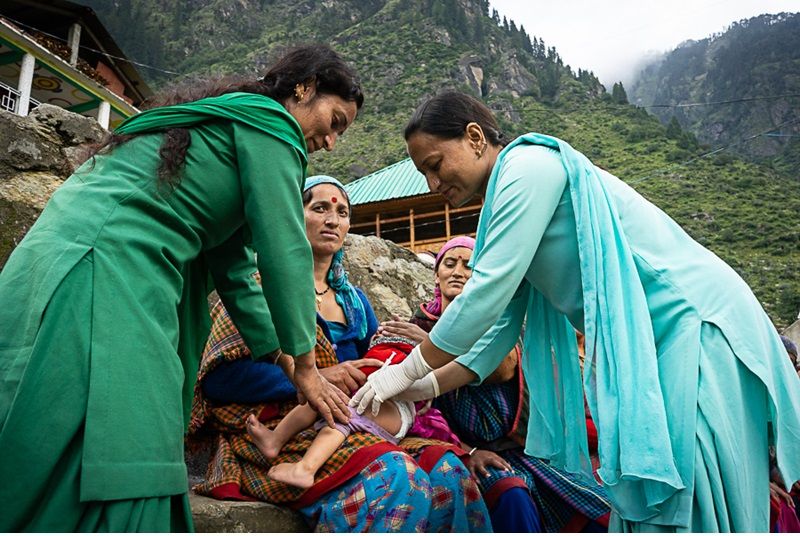 Today, Meena is no longer an outsider or an untouchable for the Malanis. They are grateful to both Meena and Nirma for the healthcare services they provide, including immunisation. (Photo: MoHFW)

Fortunately, during the same time of April 2015, Nirma Devi joined as the ASHA worker. Nirma is the first ever Malani who agreed to work as an ASHA for her village. Nirma’s involvement cleared another difficult obstacle, the language of Malanis called Kanashi. Malanis do not speak or understand any other language and rest of Himachal not understand Kanashi. She received malediction and threats for bringing Meena, an outsider, to Malana. As per the villagers, Nirma was violating the order of the guardian deity of Malana, which was a bad omen and make everyone suffer. Initially, they did not allow Meena or even Nirma to touch their children. 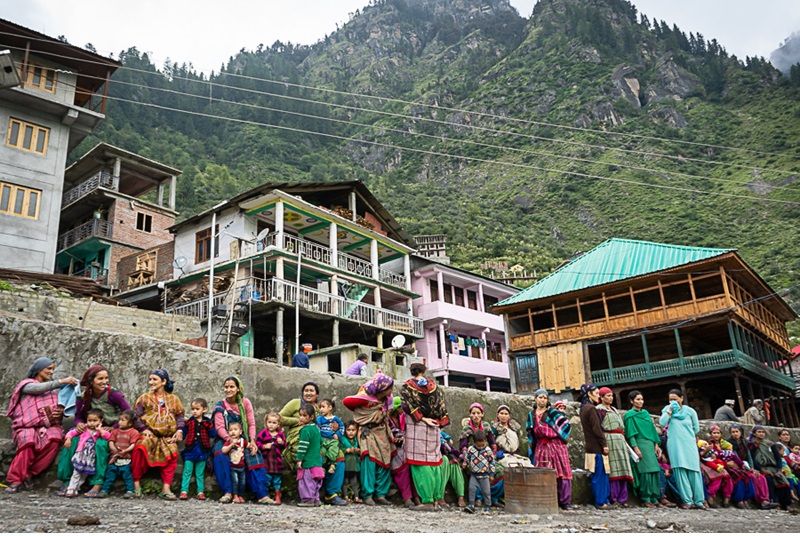 Mothers in Malana happily participate in each immunisation session and there is no unvaccinated children left in Malana today. (Photo: MoHFW)

It took almost a year for Nirma to convince the council as well as the villagers that Meena was there to ensure the good health of the women and children. Nirma organised a meeting of the senior women of the village and advocated about the benefits of vaccines and the positive effects of immunisation on children’s health. She along with Meena met the village council several times and urged the Malanis to have faith in the government’s vaccines, assuring that no harm will befall their children after vaccination.

Along with support of Nirma, Meena immunised all the 170 mothers for antenatal care and subsequently continued immunising their children. Today, Meena is no longer an outsider or an untouchable for the Malanis. Malani mothers are now grateful to Nirma and also look after Meena, offering her food while she is at work. Due to their efforts and determination, there are no unvaccinated children left in Malana today.

The role of the AVDs is an essential one in the chain of the public health system in India, especially when it comes to the immunisation programmes. They ensure that vaccines and logistics are delivered on site on time for the immunisation session days. The AVD provider is often a local person, who is generally part of the immunisatin campaign on a part time basis. 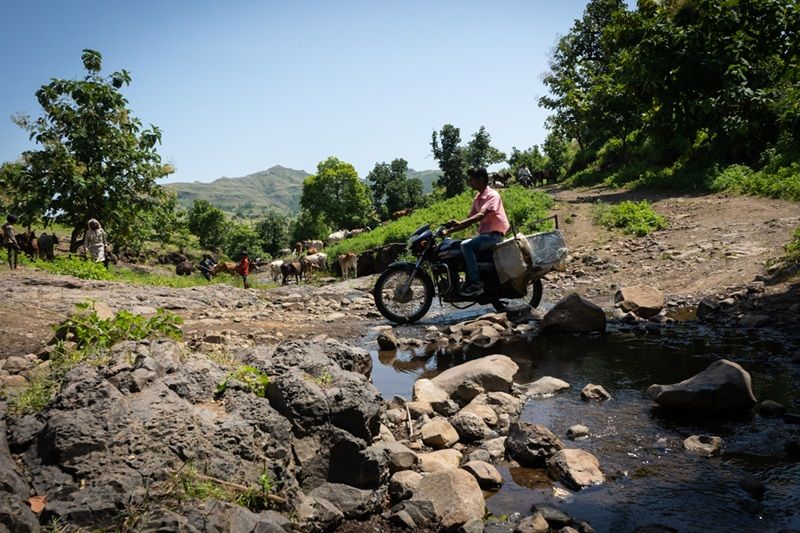 Motorcycles are the only resort to travel in these far flung areas of Barwani and Alirajpur because of the bad road conditions and the absence of roads altogether. (Photo: MoHFW)

Districts Barwani and Alirajpur  of Madhya Pradesh has a team of dedicated AVD service providers, known as the “men in pink”. These men relentlessly work to support immunisation, tackling some of the toughest and remotest terrain of India. Pink shirts are their official dress code and like true beacons of hope, they ride their motorcycles across falias and tolas, local words for small habitations or hamlets.

Gagaprasad Saste, a young man from Badwani is one such driving force of AVDs of villages under Semlet sub-centre of Barwani. He has been working as an AVD in this district for last 3 years. He works as a kufli seller in these areas and hence is familiar with every nook and corner of the area. Gangaprasad is also famous in this area for his singing talent and he has even recorded few albums of the traditional Nimari songs of Barwani of his own. Gangaprasad was initially hesitant to be a part of the healthcare system. 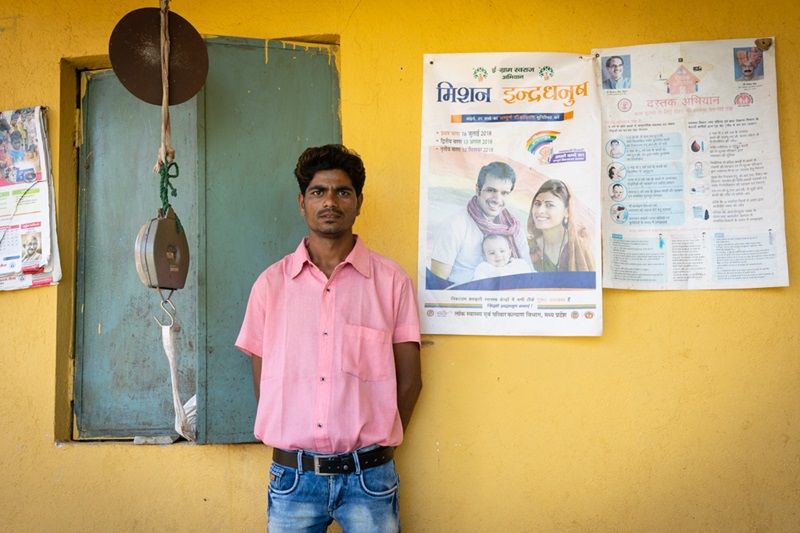 The success of the AVDs lies on the reliable shoulders of health workers like Gagaprasad Saste. The AVD system has also generated employment opportunities for rural unemployed youth, who often volunteer for it. (Photo: MoHFW)

But later on after few interaction with the supervisor, Jitendra Dudwe, he became interested and agreed to take up the job. “Having learnt a lot from Dudwe sir, I’m now familiar with all the vaccines and I am even able to converse with mothers and advise them on the benefits of immunisation,” says Gangaprasad. Spreading awareness on immunisation selflessly is now a passion of Gangaprasad, adding even more to his popularity at the block and district level.

How to stick to healthy food resolutions

Be happy today and everyday