The risks of mixing pills

Mixing of anti-Inflammatory medication with alcohol can cause internal bleeding in the stomach and acute gastritis.

Hyderabad: Simultaneous consumption of multiple medicines could do you more harm than good. Doctors say that many sportspersons mix anti-inflammatory drugs and blood thinners, or painkillers, which leads to nausea, dizziness and sometimes even more serious problems.

Dr T. Unnikrishnan, a general physician, says, “The side effects are often attributed to strenuous activity and therefore ignored. However, the mixing of drugs and supplements is very harmful.”

Aspirin and painkillers, both of which are blood thinners, decrease the chances of blood clotting when there is an injury, which makes them especially harmful for sportspersons.

Dr Shiva Raju, a general physician, says, “Aspirin is the most commonly prescribed anti-inflammatory drug for joint pain and injury-induced inflammation. Normally, in case of an injury, platelets create a clot to reduce bleeding. However, consumption of aspirin along with other blood thinners can have a synergistic effect on wounds thereby inhibiting the platelets from stopping the bleeding.” 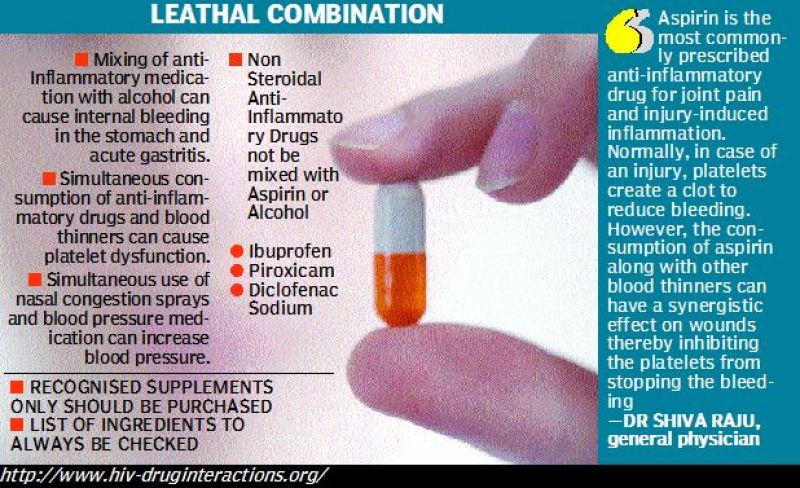 He says that it could also increase the chances of internal bleeding in the stomach, and ulceration.

Painkillers such as Ibuprofen fall under the category of blood thinners. The pros and cons of these drugs should be discussed with doctors prior to consumption. Anti-inflammatory drugs often cause gastritis. Consumption of alcohol along with these drugs also serves a double blow to the body and increases the risk of internal bleeding.

The intensity of drug interaction depends on the number of medicines consumed, the age of the individual and his or her lifestyle. The likelihood of interaction can be checked online on sites which ask patients to list their prescriptions and make a prediction of the side effects. The mixing of drugs can also cause them to render each other ineffective.

■Warning on consumption of supplements, vitamins

Over 75 per cent Indians with hypertension have uncontrolled BP: Lancet study

Cyberchondria is on the rise among ‘Google doctors’