For the organisation’s founder, Roopa Mouli, her hands were already full with various social projects, including a nutrition project among paediatric cancer patients.

Bengaluru: Sahaya Hastha, a non-profit organisation, was formed to address one of the most pressing public health concerns — cervical cancer. This issue has been in focus when it comes to urban women, but Sahaya Hastha chose to concentrate on women living in villages.

For the organisation’s founder, Roopa Mouli, her hands were already full with various social projects, including a nutrition project among paediatric cancer patients. However, the main aim to start Sahaya was unique. “My journey into founding the trust stemmed from the point when I started supporting Mathru Trust, where we financially helped the differently-abled children for a year. Then we started financially supporting a speech and hearing institute, Swayamvara Trust. I continued to back Swayamwara with some outing activities for those children,” she says.

However, the interest to spread awareness about cervical cancer came from her visit to Kidwai Hospital in Bengaluru. “I was there for a nutrition programme and it was heartbreaking to see women getting diagnosed with cancer mostly at the last stage, because of lack of awareness. That's how I shifted my focus to cervical cancer,” she says. Since then, Roopa and her team conduct four campaigns every month in rural areas around Bengaluru.

“Of the four camps, first two are to create awareness where we go door-to-door telling women about cervical cancer, causes, prevention and importance of timely intervention. After that we conduct a screening camp. But because hesitant women are not exactly willing to go for a PAP Smear test, we have also started diabetes and blood pressure tests and then we get the PAP test done as well,” she says. Her team also conducts awareness camps about cancer among students in rural areas. “Education and awareness is the key and that is why we also run awareness camps in government schools,” she says. The funding for various camps come from trustees and a few donors, she says. 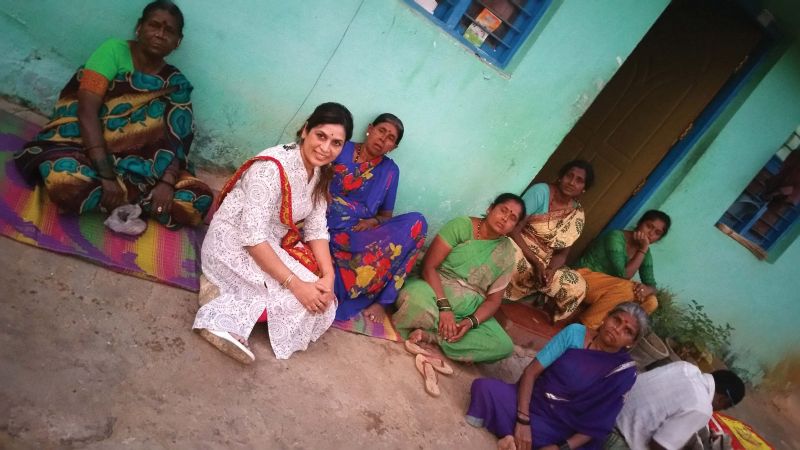 The trust, which will celebrate its fourth anniversary on September 4, earlier focused on nutrition, supporting NGOs and connecting patients to right NGO. However, cervical cancer has now become the main focus of the organisation.

As Roopa started reaching out to more and more people with her awareness work, her work was recognised in January 2016. She was honoured by the Cancer Care India in Doddaballapura taluk for her contribution in promoting cervical health.

“In a country like India, especially in rural areas, women are not exactly open about their health issues and more so if it is something as grave and stigmatised as cancer. It is difficult to reach out to them and explain the symptoms as whenever they hear breast cancer or cervical cancer, they become hesitant. These camps help breaking that barrier, and now, women are reaching out more. Such camps do help in reaching out and spreading awareness,” she says.

Currently, her team works with ASHA workers and local gynaecology clinics. “The focus is to touch upon each and every village in and around Bengaluru in due course of time. Currently, it is in and around Doddaballapura. Slowly, we will reach out to more and more rural women,” she sums up.

When all’s not well