Bisi Bengaluru: For the Sake of Japanese tradition

As the market readies itself to sell Sake at a much lower price, as otherwise the rice wine is among the pricier drinks available at any Japanese restaurant, the jubilation might encounter some hurdles along the way.

It’s Sugoine (awesome)! A clear and sparkling potion of Seishu in a Sakazuki. Or a hot glass of Sake in a cup that accentuates flavours. With the Karnataka government’s recent decision to cut excise duty of Sake drastically from the earlier 50 per cent to the 13 per cent, there is reason to rejoice. While there is no clarity on the exact percentage reduction, it is a boost for the legacy of this tradititional Japanese tipple.

The move has been welcomed by the large and burgeoning Japanese community in the city, and a growing family of sake lovers. Consul General Kitagawa Takayuki who loves Sake from his home prefecture Niigata has reason to Kampai (say cheers), “On behalf of the government of Japan and the Japanese community, I appreciate this decision. Just like wine for Western cuisine, Japanese Sake complements Japanese cuisine. It is inseparable from it.”

As the market readies itself to sell Sake at a much lower price, as otherwise the rice wine is among the pricier drinks available at any Japanese restaurant, the jubilation might encounter some hurdles along the way. A Japanese restaurant owner mulls about the availability of Sake, which even before this excise reduction, was oft not readily available at best, or just hard to source.

Yet, it does mean that it will be more accessible. “In the past five years, the number of Japanese restaurants in Bengaluru has doubled, and if you add Asian restaurants that serve Japanese foods, the number has tripled, due to the accelerated advancement of Japanese companies and Japanese expats. Affordable Japanese Sake will further generate demand among various communities, which will result in increasing income for the state government. I am hoping this is a win-win situation for everybody.”

Standalone restaurant owners are skeptical about sourcing it though they also welcome the move.

Amaan Kidwai, general manager, ITC Gardenia Bengaluru is optimistic as Edo, its Japanese restaurant is known for its sushi and sashimi across the city, “Japanese Sake being declared under the Wine category is splendid news, not only for the Japanese culinary establishments in Bengaluru but for the ever effervescent food and beverage/hospitality industry. The major concern with its popularity has always been the fact that local vendors were reluctant to procure it, and add it to their supply portfolio due to the associated high costs. This reclassification will make Sake readily available at a more reasonable price. An authentic Japanese culinary experience is one which is replete with interactions. This cuisine is very symbolic with enjoyable traditions like the Sake Bomb Ritual. The availability of Sake will enable us to review our selling price for our guests, as the demand for Sake has always been on the rise.” 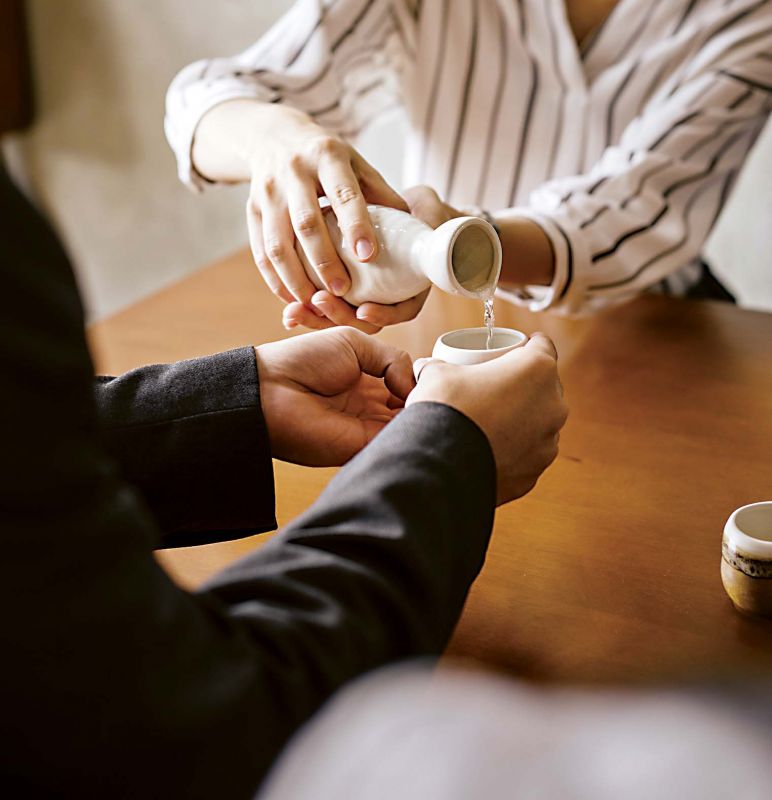 The Consul General hopes that it will cultivate new Sake drinkers in town, and shares his own Sake traditions, “For any Japanese, Sake comes with its share of memories. When I was working at the European policy division at the foreign ministry, officials from the EU visited us for a social policy bilateral treaty. They refused to concede to one of our requests inspite of it not being pertinent. They were using it merely as a tool to negotiate. So I took the officials to an Izakaya in Tokyo. Izakaya is a traditional Japanese pub where Japanese go for a drink, and relax after work. It was the first time these officials had ever visited an Izakaya. I ordered the most expensive Koshino Kanbai Sake, and they drank around six to seven rounds. It was only then that both the EU officials and my team relaxed and had a frank and honest discussion. What was holding our treaty back was withdrawn and we were able to conclude the treaty.”

There are many sake drinkers in the city who would like to enhance their experience at an affordable price, and Deepti Lalwani, is one. “The fact that it was costlier than wine was definitely a deterrent. Lowering the price is more than welcome, as I like my glass of sake with a meal.”

Suresh Vaswani, Honorary Consul of Republic of Benin and the dean of Honorary Consuls hopes that this move will orient Indians on the finer aspects of the drink, “The fact that Japanese sake is similar to wine maybe one of the lesser known facts. Like wine, the quality of sake is defined by the quality of its ingredients. Sake too comes in various varieties  dry, sweet, fruity, sparkling etc. Sparkling sake is popular among the Indian women too.”

Know your Sake
Sake was first mentioned in the Book of Wei in the Records of the Three Kingdoms. This third-century Chinese text speaks of the Japanese drinking and dancing with an alcoholic beverages. It is also mentioned several times in the Kojiki, Japan’s first written history, which was compiled in 712. The probable origin of true sake (which is made from rice, water, and koji mold in the Nara period (710–794). There are two main types of sake, the Junmai (pure rice) and Honjozo (distilled alcohol). One of the most important qualities of premium sake is a high rice-polishing ratio. The rice bran adds unfavorable flavours. Thus, the more polished the rice, the purer its taste. In the Ginjo method, sake yeasts produce fragrant components considered the best in sake. Among the sakes available, the Dassai, Juyondai, Kubota and Hakkaisan are a few popular brands.

Celebrate the joy of Christmas this year, with almonds