Ajit Saldanha
Ajit Saldanha has a finger in the pie, and another on the political pulse. And when he writes, he cooks up a storm.

Bisi Bengaluru: Hurry me to harima

Except perhaps for Harima located in the dilapidated Devatha Plaza on Residency Road, with a menu that serves up best of the old and a taste of the new.

Well before the term fat-shaming came into use, my cousin Rahul used it to distinguish between those who eat for fuel, while the palatally-evolved are the chosen few who eat solely for taste. The former are happy with a heaping plateful of biryani, while the latter, regardless of gender, start squeaking when the word “sushi” is mentioned. When you’ve overdosed on olives, are bored with bolognaise, maxed out on momos and fed up to the face with butter chicken, it’s time to take a walk on the wild side.

Back in the 80’s, there was just one sushi restaurant in Bangalore, the ominously named “Black Dahlia”; seriously what were they thinking when they named it after Michael Connelly’s fictional serial killer? Today while there are nearly a dozen Japanese restaurants in Bengaluru, they rarely attain the standard of sushi and sashimi served in the humblest ryokan from Tokyo to Kyoto. 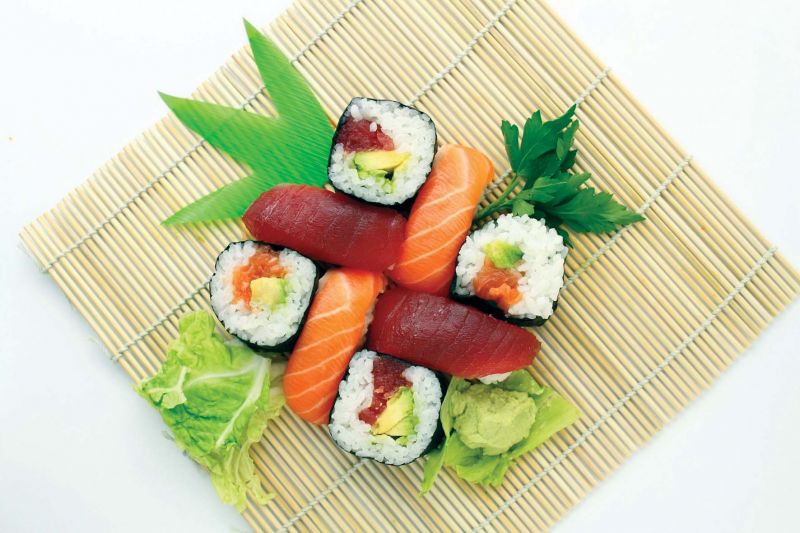 Except perhaps for Harima located in the dilapidated Devatha Plaza on Residency Road, with a menu that serves up best of the old and a taste of the new. You step in to a light, airy ambience, all blond wood and simplicity which, of course is not to everyone’s taste.

So should you try sushi at Harima, which takes its name from a town in Kako, situated in Hyogo Prefecture? By all means, but please not for the bragging rights that those with a sophomorically sweaty love of exotic food indulge in. I once took my Chennai classmate to a Japanese restaurant in Manhattan. He struggled for a while with the fish custard and crunchy sesame salad and turned a delicate shade of green when the sashimi was served. “Maccha, the chef is in such a hurry, he is serving raw fish… these people who are paying good money to eat this, how hungry are they?”

If this is your first time, try the omakase, a Japanese-style tasting menu with the chef’s choice of the freshest ingredients. You can look at the options and decide how much you would like to spend and from then on the chef takes charge. As Jonathan Gold says, “At a good sushi place, the kind that makes you swoon, the first piece you are offered is the tell, a statement of purpose that should let you know whether you are in for an hour of bliss or an hour of sake-lubricated sadness at the happiness that might have been.”

We started with Yasai no Ohitashi, spinach, delicately blanched, topped with sesame seeds and served cold in a dashi sauce: crunchy and flavourful with elegant grace notes. This was followed by tuna sashimi: three perfect slivers of maguro, tuna from the belly portion with a delicate layer of fat, redolent of the sea and beautifully arranged on a bed of finely sliced cabbage and raddish with a little bowl of soy on the side, plus wasabi and pickled ginger. It is that precise union of the subtle and the sharp imbued with the clean, elegant flavor of the ocean and that amazing umami taste which has lovers of Japanese food swooning with delight. The service is both knowledgeable and professional.

The next course was Beef Yakiniku, lightly seared morsels of tenderloin tossed with onion and green pepper in a peppery barbeque sauce: the beef was succulent and robustly seasoned with just one or two chewy pieces where the gristle had been inexpertly trimmed. We collected our thoughts, sipped our sake and compared notes. And then the yakitori was served: tender chicken heart subtly marinated and grilled to perfection on bamboo skewers, lightly charred on the outside and gleaming pink on the inside, crusted with a sprinkling of shichimi or togorashi, a blend of Japanese spices. Yes the world may be our oyster but if we are to be dazzled by its pearly luminescence, we must step outside our culinary comfort zone.

Chaat bandis back to biz, foodies have fun time