His charming smile and exuberant personality have won everyone’s heart at the Spice Route Culinary Festival held in Kochi. With no starry airs of a celebrity chef, Issa al Lamki from the Sultanate of Oman has become everyone’s favourite. In between pleasantries to fellow chefs and event organisers, Issa strides along quickly for a cup of coffee. “I am a coffee person,” he smiles. Ask him how he began his culinary journey, Issa says, “I started cooking when I was 14. I would come back from school and go to the kitchen, just take whatever is there and try to cook like my mother.”

Issa says he was a very naughty child and his mother would offer him a cook book in return for good behaviour or when he studied well. “It was a barter system,” he laughs. “That’s how it started and I used to watch cooking shows. Those were quite different from what we see now. Back then, the shows even taught us to make mayonnaise, unlike now where everything is ready. I used to write down the recipes, I still have them with me. I’ve written down the recipes and framed them so that the next generation could come and see them and say ‘Oh there is my father’s recipe collection!’”

As a child, Issa had dreamt of becoming a pilot. “My mother was a nurse; she used to notice that I was good at cooking. After I finished my third secondary(Class Xii) I went to the US to become a chef,” he says.“My father did not support me and although my mother did not want me to become a chef, she did support me. Moreover, I had only scored a 75 per cent in a third secondary, which would not get me anywhere. So I dropped the idea of becoming a pilot and decided to take a different route — to become a chef.” 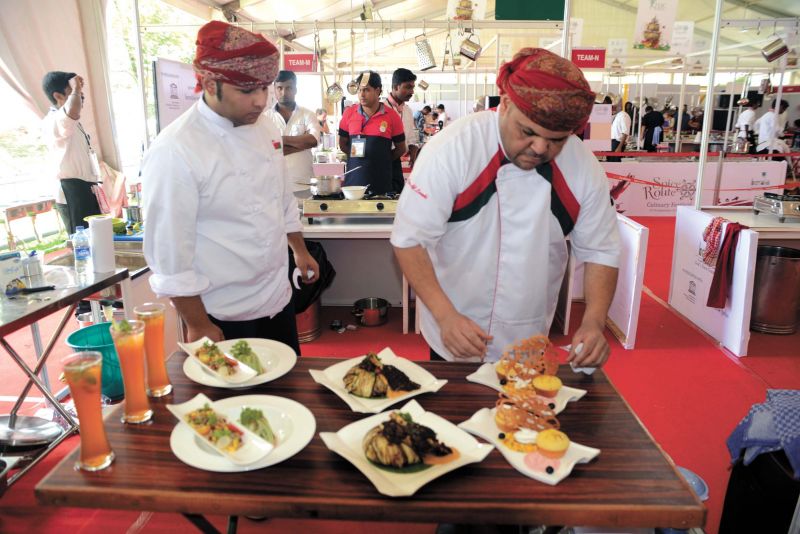 Issa with his assistant Amar during the Spice Route Culinary Festival

After his studies in the US, he returned to Oman and worked at the Gulf Hotel (currently known as the Crowne Plaza) as an apprentice. Since then, there has been no turning back. “From there, I got an offer from the Al Bustan Palace. There was no scope for experimentation. The palace has a standard cuisine. I worked there for a year and I thought it’s time up and decided to go to Saudi Arabia,” he narrates.

An accidental turn of events landed him a job at the prominent Four Seasons Hotel. “The fun part is that my interview lasted for 2 hours and 45 minutes. I had given up all hopes of joining there. The next day, I learnt that I am appointed, even before they had appointed the executive chef,” he recalls. Issa, who is here with his assistant Amar, explains how important the festival is for him. “It is very important to put Oman’s name up here. We are sharing a culture, at the same time experiencing other cultures. I have made friends from 15 different countries who are participating in the fest. We talk to each other as if we have known for years.”

At the international Chef competition, Issa cooked a popular Oman dish ‘Harees’. “We had to drop the actual menu I had prepared to quickly adjust to the situation with the available ingredients from the local market. It was a wonderful learning experience, and an opportunity for me to judge myself. This is my first time in India, but I know the Indian culture from the Indian food we get in Oman.”

Issa hopes to take this festival to Oman. “I am looking forward to discussing the possibility of organising this event in Oman,” says Issa, who owns the Al Mandoos restaurant and is a part of several prominent hotels such as Tarma and Orient. When asked what will he take back home, he says with a smile, “Kerala has got wonderful people. I will take   their smiles back home.”