A Masterchef from Kerala

DECCAN CHRONICLE. | DEEPTHI SREENIVASAN
Published Nov 26, 2017, 12:00 am IST
Updated Nov 26, 2017, 12:07 am IST
Suresh Pillai from Kollam made all Malayalis proud by featuring on the prestigious Masterchef where he cooked our traditional meen curry.

Watching MasterChef is a nail-biting experience. Various versions of the show aired in India have helped create an understanding of the different kinds of delicacies savoured in other regions. For Malayalis, this show has been an eye-opener. Not only was it extremely different from the regular cookery reality shows, but it created a set of confident food explorers and food critiques here. Sadly though, no one hoped to see a Malayali in any of the international versions of the show. That was until Suresh Pillai shared an episode on his Facebook account. For folks back home, that was a jaw-dropping moment: ‘Finally a Malayali!’

After having lent his expertise in the art of cooking in some of the leading hotels in India and the UK, Suresh had hardly ever given a thought of joining any competitions, will a year ago.

“The show is hugely popular in the UK and the whole of Europe. I have been ardently watching it every year and I also noticed that hardly any Indian took part in it. That got me thinking. Last year, I saw one of their ads and decided to apply along with the thousands from the UK,” says Suresh, the head chef at the Srilankan restaurant named Hoppers in London.

His lengthy application and telephone interview impressed the hosts and soon, he was selected.

“A chef’s experience and creativity is scrutinised during the selection process. We have to send in seasonal, local and healthy recipes so that they could gauge the creativity and talent of the chefs. Nearly 500 people are shortlisted and called for the auditions. During auditions, they check out our camera appearance and test whether we can withstand the pressure that builds up during the competition,” he explains.

Suresh beams with pride over his South Indian tag. “I am very proud that I am a South Indian chef and I wanted to go there with this tag. My intention was to introduce our food to the world. People do not give our food the value it deserves. I knew that I will not be able to win, but I just wanted to pave the way for a future participant from South India who could come better prepared.”

The only Indian chef selected to MasterChef the Professionals this year, he happily shares, “I believe that in the last five years, not more than five Indian chefs took part in the show.” 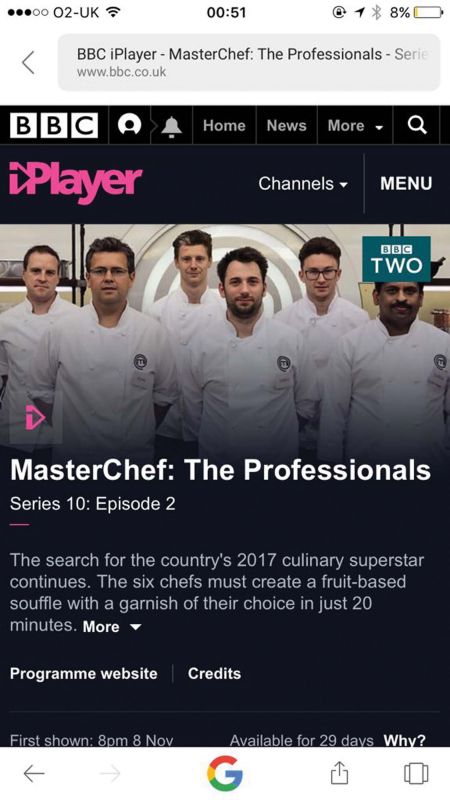 A grab from the page of the show. Suresh (extreme right).

In the first round, Suresh prepared a soufflé. “It was a skill test round and that was my first attempt in preparing a soufflé. It is a French dessert and I asked for their guidance. It was not up to the mark and I was under tremendous pressure.”

For the next signature round, he cooked our traditional coconut milk fish curry with grilled mackerel and a twist of mash potato and pachadi. “They liked the flavour completely, but one judge did not like the fish, which, he said, was over cooked. “I picked our meen curry because I wanted to cook something I prepare every day and something closer to my roots.”

Though ousted from the show, Suresh is optimistic. “Participating in this show itself is the greatest feeling.”

Hailing from Kollam, Suresh is settled in London with his family for the past 12 years. Speaking about his love for food and cooking, he says, “It started from my home. My mother is a wonderful cook.” 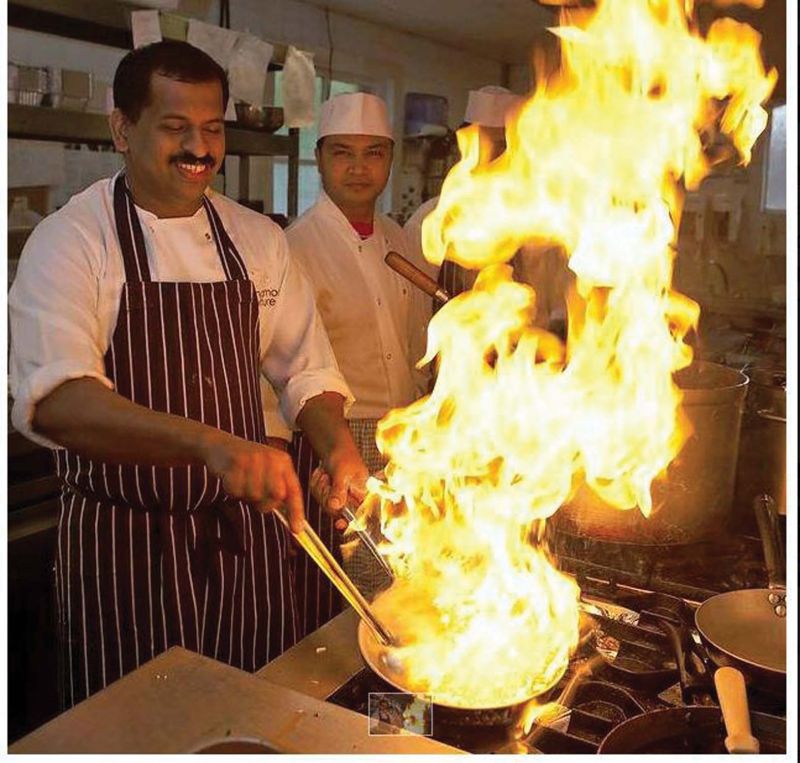 His inspiration to cook the fish curry in the competition too came from his mother. “Fish is abundantly available in the place I grew up; there was not a single day without a fish delicacy at home.”

His first tryst with hotels started as a waiter at a hotel named Chef King at a shopping complex in Kollam. “I used to help out in the kitchen as well whenever possible.”

From there, it was straight to Coconut Groove in Bengaluru. There was no looking back since then. The Leela Palace, Kumarakom Lake Resort and then straight to the very prestigious Veeraswamy, the oldest restaurant in UK, his culinary journey is marked by exemplary achievements. With the results of hard work and love for challenges, the Master Chef experience is yet another feather on his toque blanche!