Amit Roy of Think Tanc and partners touched on the Old Bengaluru feel when they opened Watson's, and the Old Bengalurean lapped it up, It has a happy vibe, great retro music, old world charm about it, be it at Vasanth Nagar, Assaye Road and Jayanagar.

We like Watson's. It’s a fun place, with a simplicity, a tippler vibe that makes it the favourite of many, and there are many in the Pub City turned Silicon Valley that amble to its warmth. Amit Roy of Think Tanc and partners touched on the Old Bengaluru feel when they opened Watson's, and the Old Bengalurean lapped it up, It has a happy vibe, great retro music, old world charm about it, be it at Vasanth Nagar, Assaye Road and Jayanagar.

Appealing to the informal oorean, Any given Sunday, or any other day, this pub grub is packed, with a joie de vivre of the olden day pub which sits comfortably in its casual essence. Having said that, we liked that the old menu had some “touchings” to down one too many. And now their changed menu has added some new touchings to make it appeal to a wider palate… with their new chef Devin who joined three months ago, and was earlier with Fresh Menu and Mainland China. We welcomed the new addition of babaganoush, hummus and pita bread. Fresh, creamy delicious with black olives and chilli oil. Would have been nicer with a roasted pita. The ghee roast bruchetta was different… nice crusty bruchetta, with nibble bits of ghee roast. Nice idea though the taste of the ghee roast could definitely do with some spice, and Mangalorean gusto! With the new chef's Asian leanings, there are some Asian tidbits added to the menu, like the thai aloo and Thai golgappa. “It is infused with kafir lime and galangal hints,” explained Chef Devin Lahar. Not something we’d try, coz we like our puchkas old school. The Szechwan idli pudi was a nice touch, sautéed in a chilli and spice mix, with cornflour. It was a bit too hard could do with a lighter cornflour drizzle we thought. The signatures we have come to expect at Watsons are thankfully still available. New entrants like cheese chilli bhaji and beef garlic sounded interesting. We also munched on a Lal maas samosa, which again could have done with some real lal maas flavour… and the samosa patty could have done with a crisp crunch. 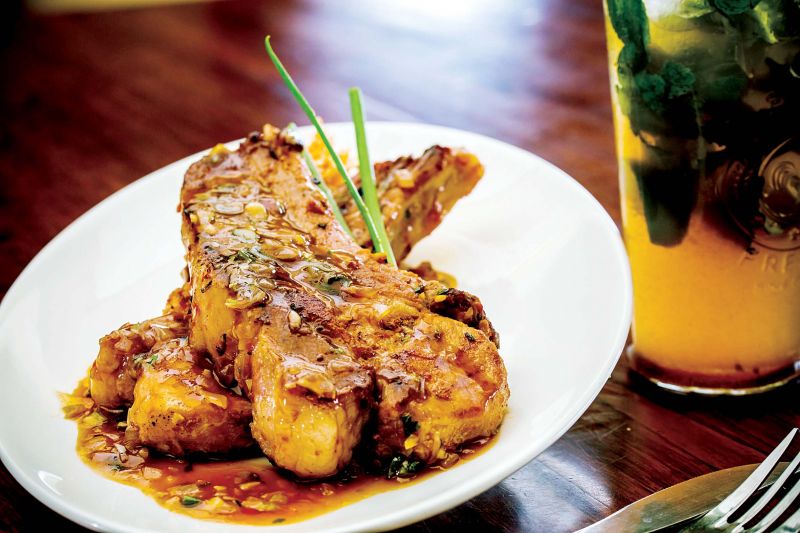 For mains, it was the pulled pork burger, lovely spongey bun, with a gooey barbeque pulled pork that was way too slobbery. The slaw was yum, and we would have liked more pork pulled into ours.

The new menu has preset meals - something that works when the tipple is what’s on your mind, and the mixed vegetable jalfrezi, and the paneer butter masala with naan or the Keema rice did sound interesting. We also tasted the grilled paneer steak, which came grilled triangles sliced with exotic vegetables like Zuchini, pepper in a tomato basil sauce, it was a good idea, and it was okay. The sauce could have done with some flavour. In as much as we like hanging out at this haven of informal and cosy fun, and grabbing a drink, the new menu dishes we tried lacked flavour. Or maybe we should have tasted the Mutton chops, spicy mayo rock prawns and pandi fry which were right up our drinking alley Or even the butter chicken pie or dhaba biryani. Affordable, a wonderful hangout where you can leave your wallet worries behind, it is what it is. Yet, with tipple joints upping their food quotient, it would be apt if this favourite old Bengaluru inspired joint added more taste to their new menu. It would keep them in good stead, like its wacky cocktails keep its customers in!