Bisi Bengaluru: Egg-static at the feasting!

In the city, Catholic Club has through the years been known for its famed Easter egg hunts, with one to be held on April 22.

Whether Pagan or Christian, the painting hard-boiled eggs was a tradition, one that represented rebirth, light and fertility. These symbols exist now in Lent, the 40-day period of fasting and penitence, which culminates with the brightly-painted eggs and the Easter bunny. This is traced back to early Christianity, when people abstained from eggs and meet during the Holy Week, following the diktats of Church leaders. Thus Easter was the first chance to eat eggs! The bunnies also soon scurried into the legend as they were symbols of new life, (rabbits are known for their procreation)! Legend has it that the Bunny laid, decorated and hid eggs, which paved the way for Easter egg hunts as a celebration for children.

In the city, Catholic Club has through the years been known for its famed Easter egg hunts, with one to be held on April 22. This is also when bakeries serve freshly made hot cross buns. The tradition is believed to have originated when a 12th-century monk introduced the sign of a cross on the buns he baked in honour of Good Friday. In the city, All Saints, Thom’s, Alberts Bakery, Fatima etc all serve Easter goodies, with some starting it with the ritual of hot cross buns on Friday. 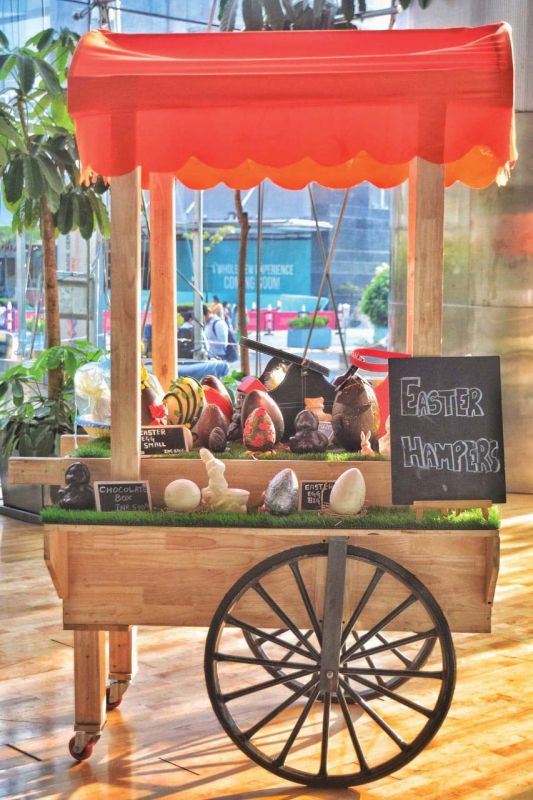 > Sabir Faizan, owner, Alberts Bakery has been serving the famed hot cross buns for decades. The bakery is an institution that has stood the test of time (around 117 years old) and Sabir says, “We sell traditional hot cross buns to walk-ins. For Easter, our marzipan eggs with almond paste and a chocolate coat are very popular. Earlier, we sold sugar coated ones, but now Marzipan is in demand.” Prod him further and he admits that the buns are a “family secret” that has been passed on through generations.

The Easter feaster!
The Easter meal was and still is, a family occasion for many. Yet, the advent of inclusive cultures has prompted many non-Christians also to partake in the celebrations. Be it eggs, roasts, gravy, honey glazed ham or pudding. Homes across the city have their favourite butterball turkey with stuffing, roast chicken and leitao (pigling) to break this period of fasting. And hotels and restaurants across the city each have a handsome spread to tuck into.

The five star route in the city is tried and tested. Be it Taj, ITC, JW Marriott, Courtyard Marriott, Sheraton or Conrad, the Easter Sunday lunch offers meats and a milieu of morsels to feast on. ITC Gardenia has a special Easter Sunday brunch, and Uchit Vohra, executive chef, believes it is a time when loved ones come together to congregate over delicious food. And for the ultimate foodie, Chef Vohra says, “This year, we are creating the perfect combination. The menu will entail honey glazed pork leg, spears, slabs of veggies, pan jus and salt crusted red snapper with grilled vegetables, beets and potatoes.”

The Sheraton Grande Bangalore Hotel at Brigade Gateway has a menu replete with honey-orange glazed ham, roasted asparagus, deviled eggs, and festive desserts like cinnamon rolls, coconut macaroons, lemon piebars. Abhishek Mishra, director, food and beverage, Sheraton is team ready with a buffet with tradition written all over it. “An Easter egg counter, grill station, Bavarian meat loaf, US butterball turkey with Giblet gravy, apricot and bourbon glaze ham are on the menu. Guests will also have access to our pool which is situated on the fourth floor during brunch hours.”

This is the time when master chefs dive deep into their recipes to bring out classics. The Conrad will also be joining the bandwagon with an interesting spread of the Chef’s signatures - Tenderloin Wellington, stuffed roast turkey and a decadent spread of Easter desserts. Add treasure hunts, Easter eggs and Easter bunnies offered at most places, this is a Sunday that augurs good spirits, and satisfied souls.