Trevor, the travel and cuisine hunter

He is an explorer. More precisely, a food explorer! For the pure love of food, Trevor James aka The Food Ranger goes places to explore the local cuisine and film his experience, before posting them on  his YouTube channel The Food Ranger.  In August, Trevor had came down to explore the local Kerala cusine, and pretty much down the south up to the west - Mumbai, Hyderabad, Chennai. Trevor’s  video on Kerala cuisine was shared over 35,000 times and garnered more than 30,000 likes in Facebook alone. “I chose Kerala because I heard about its beauty and amazing food. On the airplane descent to Cochin, I knew it was the right choice — everything was green! There were so many forests and it was such a huge contrast from Mumbai. It really got me excited to go and explore Kerala. And I remember the first time I tasted local food in Cochin at a toddy shop, it blew me away, especially all the spice!,” says Trevor, on an email interview.

The way Trevor hums on the food, is definitely a treat to watch for. Trevor, originally from Canada, was working in a resort that was only open in the summer. “I was tour guide back then, and then when the resort closed, I would have a few months off to go travel with the savings. It was these first few years of working like this that really inspired me to try and have a life full of travel and food. The first time I travelled outside Canada was when I really began to fall in love with food and travel. I took a four-month trip from Singapore to Beijing with another Canadian friend, mostly by train, and during the trip, I found that the food we were eating attracted me much more than almost anything else we were doing.” 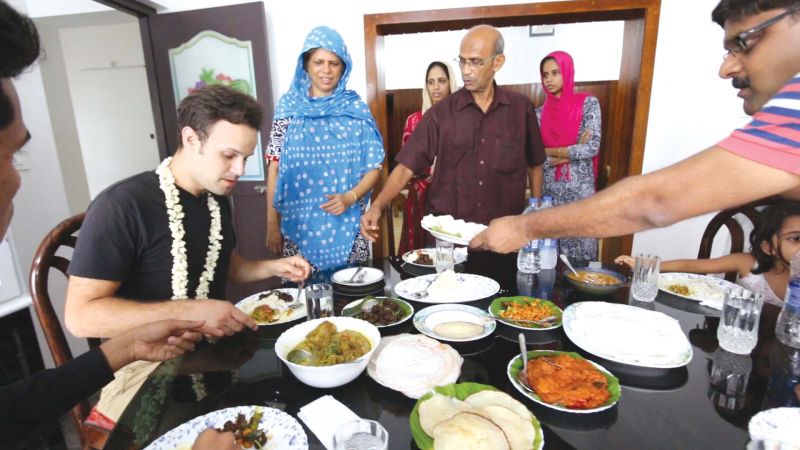 A screenshot from his Youtube video“I decided that in my future trips, I would mainly travel for food, I would food hunt or go ‘food rangin’ for the best food wherever I went. Now, I have a base in Chengdu, China, where the food is numbing. (Yes, it numbs your mouth!) and spicy, and I travel around to nearby countries for food whenever I get the chance to film for The Food Ranger,” shares Trevor. On his experience in India and Kerala, he says, “My experience in India was completely amazing. I honestly had one of the best trips of my life. It was my first time in India and I had no idea what to expect and I tried to go in without any ideas of what things should be like and just try to learn for myself and taste new flavours. Kerala was definitely my favourite place, the food was so amazing! The people were some of the friendliest I've ever met, and the overall vibe of Kerala seemed so relaxed and happy. The nature and the greenery also really impressed me, everything seemed to come from nature and the air was so fresh!”

He was amazed by the abundance of natural resources. “I spent 10 days in Kerala and stayed at a farm house near Cochin where jackfruit and coconut were in abundance. I was surprised how much there was, they are really expensive in China! I moved to Cochin and explored local food and fell in love with the Mullapanthal toddy shop. It was here that I realised how friendly people in Kerala really are. As I was eating, a local began to share with me his thoughts about food in Kerala and why it is so special, telling me to share the food with the world on YouTube.”

Something more was in store for him in the form of a friend. “After finishing all that amazing food at Mullapanthal, I met and befriended Aleeja, who invited me to his family home the next day for a special feast! I would have to say that the homecooked meal I had with Aleeja and his family was the best meal I had in India. All the thick gravies, fresh shrimp from the backwaters, and wow, the spice! The food was some of the spiciest I found in India and I loved it! Everything was so fresh and flavourful! And I loved how a lot of the dishes had a coconut flavour to them. It completely blew me away and left me with a lasting impression on Kerala. I definitely could have explored a lot more. I barely scratched the surface of what to eat and see in Kerala. It’s definitely worth coming back for! I like to travel slow and take my time seeing a place, so I only went to a couple places in Kerala,” says Trevor.

On his Kerala food craving, Trevor signs off by saying, “If I had a Kerala food craving, I would probably go for the Karimeen I had at the local toddy shop, the amount of spices and flavour infused into that fish was really spectacular!” I think the thing that left the biggest impression on me was the people and their friendliness. There were just so many times I was left saying to myself “Wow, the people here are SO friendly!”.