Bisi Bengaluru: It's all Greek in Marzipan

If you happen to be in the neighbourhood, stop by to taste the pies and pastries… it's a café with class, some delectables, and priced well for the price-apprehensive eater.

Greece came to town, and without much fanfare took to feeding harrowed techies and traffic snarl-wornooreans in its white, twinkly-sparkly, aquamarine-hued cafe, Marzipan, on Ulsoor Road. Started by Greek girl Kiki Prabhu who moved to the city when she married her Indian engineer hubby, the café offers homecooked Greek cuisine with some pastas, pizza and sandwiches.

Like a pleasant breath of air blowing in from the Mediterranean comes this cafe, which also has eclectic Greek puffs and a slew of the most delectable pastries. A small compact space with around half a dozen tables and some high stools, it's basic but Euro basic (read minimalistic and refreshing) with filament lights casting a warm glow on the interiors and quaint bird cages glinting with little serial lights. Toasty! 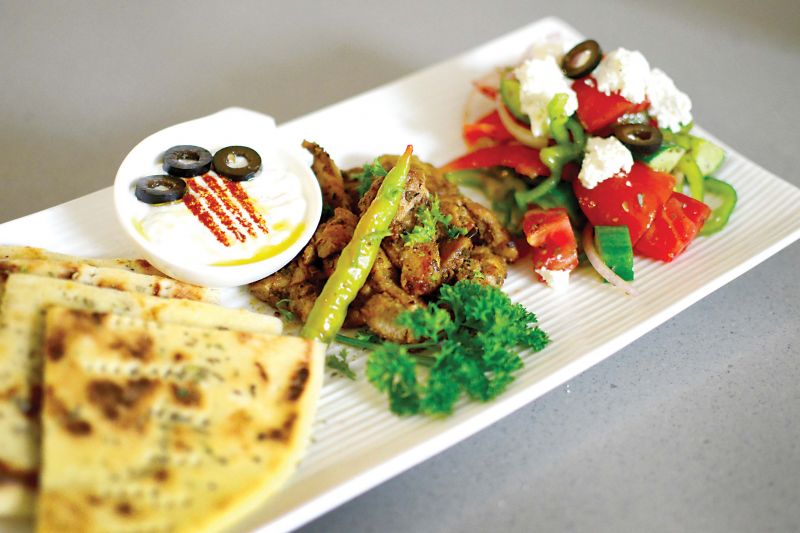 A small compact space with around half a dozen tables and some high stools, it's basic but Euro basic (read minimalistic and refreshing) with filament lights casting a warm glow on the interiors and quaint bird cages glinting with little serial lights. Toasty!

With the mellow light and small bar stools, this café seems perfect for a cuppa and a good read as you watch a noiseless traffic go by Ulsoor's traffic jammed road. The menu is succinct too, with mousaka, souvlaki, sandwiches, puffs, salads and pastries.

We started the meal with a Caesar Salad, and we asked specifically for Romaine lettuce… the ice-berg variety isn't high on our list. Although it came in a delicious white anchovies sauce, it had no more than a mere hint of Romaine … would be nice to have the chicken Caesar salad as a crunchy Romaine offering, with more parmesan sprinkling. The garlic bread was a tad too biscuit-like, though. We also ordered the famed moussaka that came in roasted beautifully, so much so that the meat eater on the table did not realise it was aubergine! It was creamy, smoky and delish with a homecooked feel. A bit dry in the chicken stuffing but alright.

Kiki informed us that the mousaka, puffs and pastas are quite popular. We also ordered the Tyropita which was buttery and soft, a bit bland with the Greek cheese stuffing, we would have liked a bit more herby flavour, but it was fresh from the oven. The spinach and sausage pies here are quite the rage, but they were over as Kiki makes them fresh and they sell out everyday. "I grew up in my mum's Greek kitchen and when I settled here, I would cook and friends loved the food. My husband suggested a cafe, so we started Marzipan in 2015 and then opened one at Raintree as well," says Kiki. They make their own sauces and cheese as well.

We also ordered the chicken burger which came in plump and simple but the chicken burger patty was a bit too dry. We liked the crunched up potato wedges and the personalised service. Kiki informed us that the pastas and the sandwiches are very popular, and we spotted a new addition, a souvlaki, which we will try the next time. It's a quick-bite place, for that nice cuppa and fresh food and the ambience is simple and refreshing. The price is great on the pocket too.

We had the banoffee pie which was delicious, in its toffee caramel flavour, banana and whipped cream with a moist base, which we liked. Kiki decided to name the place Marzipan as a dedication to her undying love for almond base and also because the Greek names she thought up proved a real mouthful!

If you happen to be in the neighbourhood, stop by to taste the pies and pastries… it's a café with class, some delectables, and priced well for the price-apprehensive eater. We would have liked some choice of meats (beef, pork or lamb), especially since the Greeks are known for their meaty bites. Have a peach iced tea as you let the Mediterranean-inspired cubby home give you a breather, and a quick bite.

8, Ulsoor Road, Bangalore 560042
Call: 08041475700
Meal for two: `800
Must have: The bakery is deliciously stocked, if you get there first. And the menu has some very delectable offerings - Pastas, spinach and sausage pie, moussaka, sandwiches etc. Pastries like the Chocolate decadent, Bangalore Mud Pie, Cheese cake according to Kiki are popular.

Veganism continues to be one of UK's fastest-growing lifestyle movements

Trendsetters of the table

Chinese, made in India