Ajit Saldanha
Ajit Saldanha has a finger in the pie, and another on the political pulse. And when he writes, he cooks up a storm.

Stuck in the middle: Burger ‘bacon’ings

Into this crowded landscape comes a burger joint that glories in the name of Burger Seigneur and if the name is fancy, so are the burgers.

Not another restaurant in Indiranagar? If I may be permitted to quote Amy Winehouse, I'd say, "No, no, no." As would 90% of the residents of 100 Ft Road and Defence Colony, former havens of peace and quiet that are now home to 120 restaurants and bars and still counting. Until the 80's, Indiranagar was a barren wilderness in culinary terms where one could grab an idli or take khara bath at the nearest Darshini. NV types opted for  bar cum restaurants, where 'jilly jicken grivy boneless' ruled the roost or the faithful Manju played Laila to chicken and gobi in her Manjurian avatar accompanied by greasy parathas and nons (naans). It was way out of the loop and if you felt the craving for Spaghetti Primavera, you just grabbed a packet of Maggi noodles and squeezed it till the feeling passed. Cut to 2019 and you are spoilt for choice with Burmese, Thai and Bengali and far more.

Into this crowded landscape comes a burger joint that glories in the name of Burger Seigneur and if the name is fancy, so are the burgers. We started with Dynamite Shrimp: crispy and pretty good but we would have much preferred the accompanying sauce on the side instead of smothering the shrimp with chilli-mayo goo. With Thulp shutting shop, there was a clear void for artisanal burgers in the market and the new kids on the block are sharp, focused and on top of their game. They make their buns in-house, a soft potato bun that doesn't crumble, made with imported yeast. Personally, I prefer a sourdough brioche with my burger but maybe I'm just being difficult. Try the Dynamite Lamb: the soft bun encasing a succulent lamb patty served with a kickass fresh pomegranate and pickled jalapeno sauce. Crinkle cut fries served in a little wire basket and a Raspberry Mojito are the perfect accompaniments. 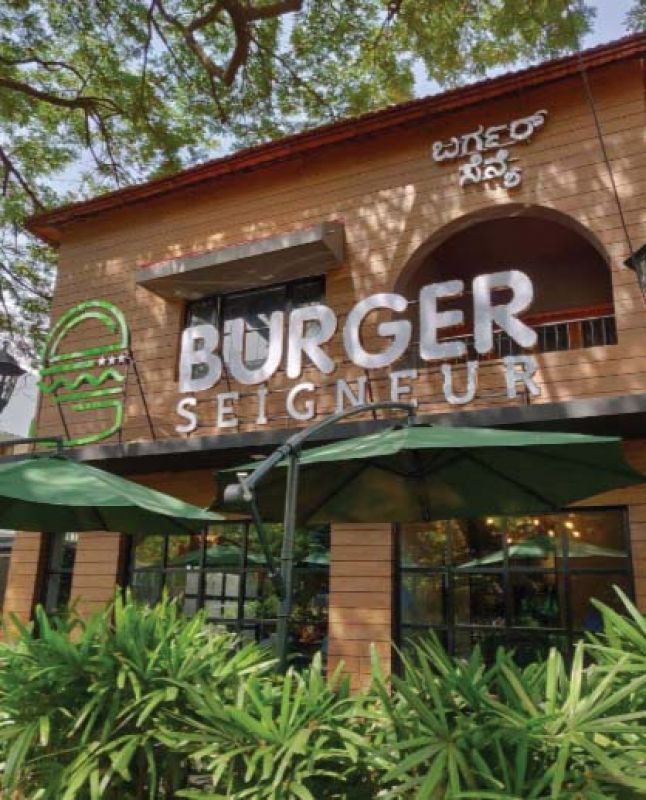 The team at Seigneur has a curated burger menu with just nine options of which two are vegetarian. Thank heaven the latter aren't aloo, gobi or paneer-inspired. Instead they serve a Lucien Burger, a bun generously filled with Portobello mushrooms sautéed with sun-dried tomatoes, caramelised onions and slathered with a house sauce with Parisian flavours. If you're not too chicken, you could try the ominously named Jack the Ripper (a chicken patty with their special Franco-honey sauce, which has a vivid orange hue but tastes pretty good) served with coleslaw to make you feel virtuous. The patty is crisply fried and tastes far better than the sawdust equivalent made by the ghastly colonel, if you catch my drift.
Beefy types will relish the Paris Delice: a succulent beef burger topped with beef bacon (yes, there is such a thing and it tastes pretty great) grilled mushrooms and the house Franco-honey sauce. There is great care and attention to detail which shows in the quality of the end-product. Evidently a fair amount of research and expertise has gone into the technique and if the young team running the show is able to maintain their quality and standards, they should be able to stay the course. The burgers here are a tad pricey when compared to the average burger joint but the price differential is totally justified given the quality, as you will realize when you sample their burgers. The interiors are cheap and cheerful: simple wooden tables, lots of potted plants, coloured knick-knacks and greenery and the place is pet-friendly. The coffee is fairly decent and the mocktails are imaginative: think Lichee Mojito with a kick of Thai bird chilli.