A nasty surprise in your fruit

DECCAN CHRONICLE. | RESHMI CHAKRAVORTY
Published Feb 5, 2018, 12:12 am IST
Updated Feb 5, 2018, 12:46 am IST
From pesticides residues to contamination by microorganisms, there is a lot to look out for while consuming fruits.

While it’s common knowledge that fruits and vegetables laced with pesticides are harmful for health, there are some other less obvious offenders like microorganisms.

While it’s common knowledge that fruits and vegetables laced with pesticides are harmful for health, there are some other less obvious offenders like microorganisms. But a fruit being made unsafe by spider eggs is almost unheard of! It was recently reported in The Mirror that a girl in Liverpool, UK, found spider eggs inside a banana once she took a bite of it.

When asked about the feasibility of such an occurrence, Sridevi Jasti, a nutritionist who specialises in healthy organic food, says it’s definitely a possibility. “People may think insects inside a banana may not be possible. But on the contrary, it’s possible and I have seen it quite recently. I had bought an organically grown banana and to my surprise there was a bug inside. Yes, having spider eggs inside is a long shot. But it can happen once in a while,” she says.

Elaborating on how an insect or microorganism can make its way inside, she says, “Some insect makes a small hole and puts eggs in the fruit shell as it starts growing. The hole is very small, that’s why you can’t see it. The maggot grows inside the fruit eating its pulp. Mango from outside may seem perfect to eat but once you see the pit inside you may find some growth. It’s really difficult to spot it from the outside.”

Giving an insight into the effects of such microorganisms on one’s digestive system, Dr Raghuram Kondala, MD, DM (Gastroenterology), says, “We all know chemicals in pesticides are harmful, which can even lead to cancer. But otherwise too, fruits and vegetables grown organically can be harmful if such parasitic growth is found and consumed. The larvae, if it enters one’s system, can make its way to the brain and damage it. Even food poisoning, diarrhoea or intestine infection can’t be ruled out.”

Elaborating further, he says, “There are two main cases we find patients complaining about. One is Cysticercosis, which is a parasitic tissue infection caused by larval cysts of the tapeworm Taenia Solium. These larval cysts infect the brain, muscle, or other tissues and are a major cause of adult onset seizures in most low-income countries. While the other is Salmonella infection, which is a common bacterial disease that affects the intestinal tract. People become infected most frequently through contaminated water or food, but it can be treated.” According to Karen Campos Bhatia, nutritionist, banana should be the last fruit to have larvae growing inside due to its thick skin. “Fruits like apples, guavas or pears, which have a thin skin, are more susceptible to such incidents. But again, most microorganisms are not harmful,” says Karen. The best way to avoid such nasty surprises is to wash the fruits and vegetables thoroughly before consuming them. 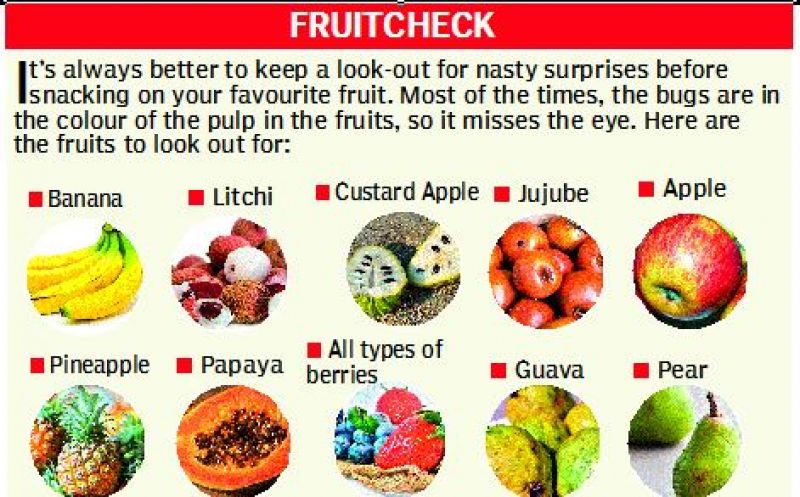