DECCAN CHRONICLE. | SURUCHI KAPUR GOMES
Published Feb 2, 2018, 3:58 am IST
Updated Feb 2, 2018, 4:23 am IST
Equally fascinating is the way in which different cuisines have adapted to the little white anda – it is a lesson in culinary glory.

That is what Egg Factory did as it celebrates its tenth anniversary this year, 10 years walking a flavourful route through history, origins and cuisines.

The versatility of the egg in global cuisine is enough to stop anyone in their tracks. Equally fascinating is the way in which different cuisines have adapted to the little white anda – it is a lesson in culinary glory.

That is what Egg Factory did as it celebrates its tenth anniversary this year, 10 years walking a flavourful route through history, origins and cuisines. It’s time for a brand new menu and this one goes beyond the humble anda pav to unearth delights from across the globe. The quick, eat-and-go, no frills egg-itchen has also added a spruced up yellow, earthy tiled and wooded ambience as in-house chef Bikash Gortola and director / biz whiz Yogesh Mokashi scoured cuisines for six months to introduce the new menu. Given that it’s in its tenth year, is a credible feat indeed.

When Yogesh decided to open this “egg”straordinary chain, he hit gold among the millennials, and today with five outlets, there is talk of expanding.

“The new menu is from cuisines across the world, except for about 20-25 percent of the old favourites like the Manipal special masala omelette, akoori, bun masala, our classics are still there,” adds Mokashi who has hit the younger egg-loving populace’s heart with a simple egg canteen in a very chic easy avatar. “Every country has it’s own inherent egg preperations, and we sat and thought about how to bring it together and celebrate those inherent differences. We want our guests to egg-splore a global menu in a comfortable informal ambience which is not gourmet or fine dine,” he adds.

We started with a Tex Mex Miggas, a plate to share — freshly fried nachos with egg bhurji and cheese... we were unsure at the start but the first bite put our worries at ease. Crunchy nachos and creamy eggs make for a delicious snack. The new Cloud Eggs, beaten egg white cooked on a pan... with the bulls eye dropped for a minute before serving, were fluffy whites with a runny yellow. A good idea, though the fluffy white was not cooked through... it would be perfect with a side of garlic bread.

There are a slew of new dishes apart from the usual desi omelettes, French toast, egg curries and sandwiches. There is Kothu Paratha and Egg Rajwadi from Surat, Oyako a Japanese chicken and egg dish and vegetarian options.

The Israeli Shakshuka (eggs cooked in a tomato, onion and bell pepper mix, served with pita) looked appetising too, but how much can one eat? We scoured the menu for one of our favourites, the delectable huevos rotos and in its absence, Anda Ghotala. “Eggs in three forms in a pav bhaji-ish offering, a Surat street food,” Mokashi explained. We liked the three textured eggs, boiled, scrambled and in the masala, would be nice to have chunky bites. It was good, very spiced... with soft and buttery pav.

Next was the Khao Suey, an exciting new addition. A steaming bowl of Khao Suey, perfect, Egg Factory-style. It came with a boiled egg sliced in two, a bounty of veggies like broccoli, beans, carrots, zuchini and mushrooms all cooked perfectly, and a very subtle coconut creamy soup with noodles. Delicious with a splash of lime, and thankfully, not too coconutty. As a meal in a bowl, this one’s great to order in at the office, with crunchy onions, garlic sprinklings.

Egg Factory also offers a kaya brioche. Delicious, a cross between a French toast with maple syrup and peach compote. “Kaya is a Pan Asian coconut milk and egg jam, usually had plain, or with bread, with a pandan leaf or screw pine flavouring. It is akin to a national breakfast in Singapore — a Kaya toast, two boiled eggs and a cup of coffee,” explains Mokashi. It was caramelly in a subtly sweet way, with a peach reserve consistency. We kept returning for nibbles of the plateful. The new desserts have taken a while to get to the menu, and are a very interesting mix. From the unique Quindim, a Brazilian coconut custard cake with toasted, chewy coconut at the base and tastes a bit like Goan bebinca that a fellow diner loved. Sangkaya is a silky smooth Thai style custard served with a berries reduction: light, caramelly and delicious. The baked cheesecake was dry, but we liked the rice kheer with egg whites —eggy but good. For a quick grab a bite, it is perfect and for the college-going hungry, it’s a sure shot. It’s easy menu and economical prices offer office-goers some interesting bites too. Egg lovers, here’s a whole lot of egg-citing quickies to choose from. 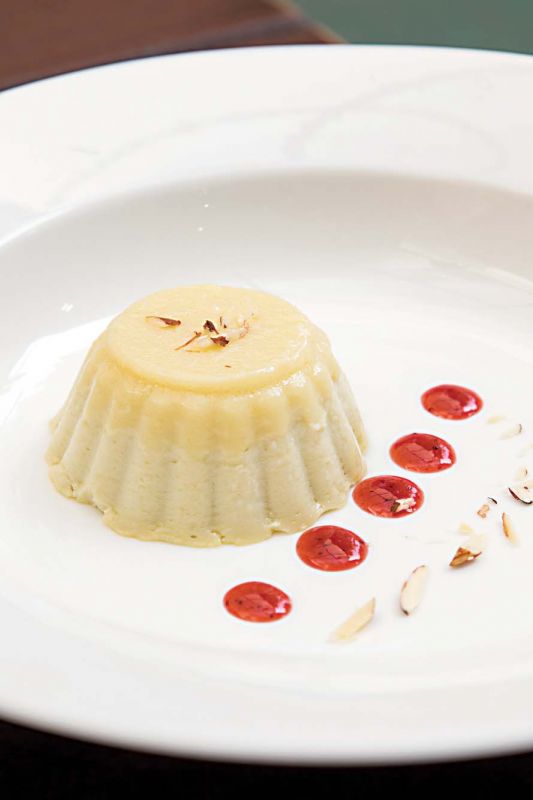