Aizya Naaz Joshi is India's first international transsexual beauty queen. The icing on the cake of her success is that she is also the world's first transgender model to win an international beauty pageant, not once, not twice, but three times running!We talked to the reigning Miss World Diversity 2019, who competed against natural-born women, about the trajectory of her success - the trials, tribulations and incredible triumphs…

“I am a woman biologically and on paper, by heart and will as well. A few months before the last Miss World Diversity beauty pageant, my marriage with my boyfriend got called off because I used to be a man. That shattered me into tiny pieces and I over-ate out of depression. I became obese but that didn’t stop me. I worked hard and I won the title, again. Three times’ a charm for me,” laughs Aizya Naaz Joshi. 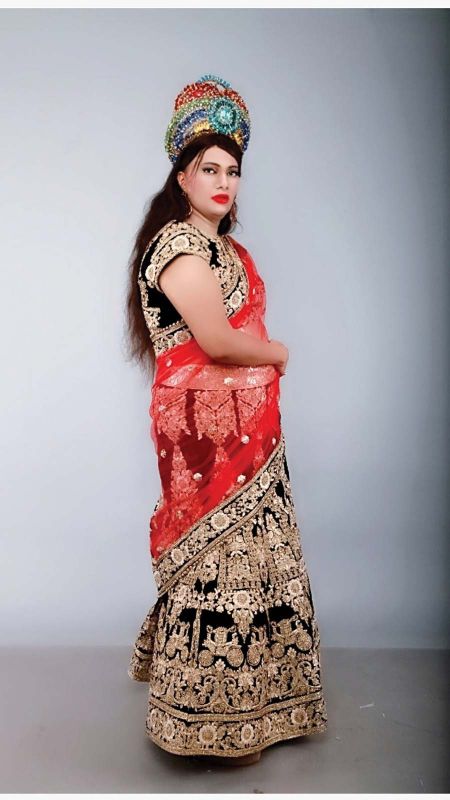 Talking about the pageant’s talent round, Naaz performed a dance piece as she had done before, but quite a different one. “In 2018, I had danced on the concept of domestic violence while this year, I paid my tribute to my favourite Bollywood actress, Sridevi. For the ethnicity round, this year I dressed up as an Indian goddess, with a crown, a lehenga-choli, bindi, bangles, lipstick and a lotus in my hand. I wanted to look like how each one of us imagines a goddess to look like.”

Talking about how the modelling world has progressed over the last three years, she says, “I have seen a growth in the number of transgender women taking part in beauty pageants over the past three years. It took me by surprise to see how supportive people are getting over time. This shows that the world is more open to equality now, and this is what the true essence of equality means.” As we discuss the physicality of being a beauty pageant contestant, she observes, “Another thing that is changing is the entire notion of body stereotypes. Earlier, every model looked similar, with the same skin tone, same body type, same 34-26-34 figure, but now that’s not such a priority. There’s no bikini round as well.There’s so much progress in the modelling field, not just in India, but across the world.”

For Naaz, the road to success was paved with stones, and full of puddles and quicksand. She had to overcome hardships and barriers that constantly came in her way. “When I was a kid, I used to be very feminine. That was natural to me. But I was asked to be different, more ‘macho’, as they called it. Classmates who I thought were friends, used to address me as ‘chhakka’. This emotionally destroyed my parents and they sent me to live in Mumbai at the age of seven,” recalls Naaz sombrely. “My local guardian ran a dance bar in Mumbai. From the age of 11 to 18, I went to school during the day, did my homework in the evening, and I danced at the bar during the nights. That’s how I earned my keep. I stayed strong, all through my journey. I was molested at a young age and I felt alienated but the safest I felt was at that dance bar, where everyone was at distance,” she remarks wryly.

At the age of 18, Naaz met her cousin, Viveka Babajee, a famous Mauritian model. It was through Viveka’s help and support that Naaz got into NIFT and studied Fashion Design. After Viveka committed suicide in the year 2010, Naaz decided to take forward her unfulfilled dream of becoming a model and bid adieu to the world of design. After a lot of hard work on her mental peace and physical appearance, Naaz began doing photoshoots and ramp walks. With the money she earned and with the extra financial support that Viveka had left her, she got her sexual reassignment operation done in 2013. From here on, her journey to fame began.In 2015, she also won titles such as United National Ambassador and walked many ramps as a showstopper before she went on to participate in Miss World Diversity and create history.

Talking about how important her win was, not just to her personally, but to society as a whole, she says, “My win is very important for the LGBTQIA+ community but having said that, I also believe that my victory is important for everyone who feels that they are born disabled or different from the mainstream human orientation. It’s my way of saying that, just because we are different, it doesn’t mean we should stop believing in our dreams. We need to work hard towards making those dreams a reality.”

As a social activist, Naaz wants to be a vocal representative of her ilk. She desires to meet Prime Minister Modi and other representatives to have a chat about the transgender community. She says that while everyone talks about how important an inclusive approach is for the transgender,it shouldn’t stop with just words.According to her, further action such as informative programmes must be taken. She also wants to talk about how insurance companies should offer a cover for sex reassignment surgeries.

Naaz believes that a lot has changed after her success as a transgender model. She says that people take her more seriously now and that this was just her attempt to show people that a transgender woman can also be a beauty queen. Transgenders are beyond the old stereotypes today, achieving so much more instead of being reduced to begging and clapping on the streets. People have a certain image of the way a transgender woman looks, long hair and sarees with loud colours, she says,adding that they have moved beyond that now.