Porter understands where established notions of black masculinity originated, and he understands how toxic they can be. He and his stylist, Sam Ratelle, also realize how rigid gender-driven taboos can be and want to help the walls come down.

“It goes all the way back to the earliest of emasculations, which is slavery, so the only way to sort of overcome that is to be the strongest and the most masculine and the most powerful and now, what has become toxic,” Porter said. “And I don’t think it’s just black people. I think its men in general. Every ethnicity has their version of it.” Porter couldn’t care less about negative comments.

“The comments are not my business. What people think about what I’m doing is not my business. I lived that already,” he said. “I’m inside of my authenticity and the whole point is that you have to respect me as much as I respect you. If you don’t like it, go somewhere else. You don’t have to look. It’s not about you. I don’t understand why my putting on a dress causes this much strife in your life.”

Ratelle said he began working with Porter about a year ago. “He said, ‘I want to be a piece of walking art,’ and we just went from there,” Ratelle said. “It’s been really awesome to work with a bunch of great designers. Randi Rahm was certainly completely open. Issey Miyake was fantastic for the Radio City show (Porter was a study in white). Christian Siriano, the fact that he did this custom gown in one week, was incredible after saying, ‘Absolutely. There’s no question we’ll do this.’ Michael Kors has been the most gracious human. So has Tom Ford.” 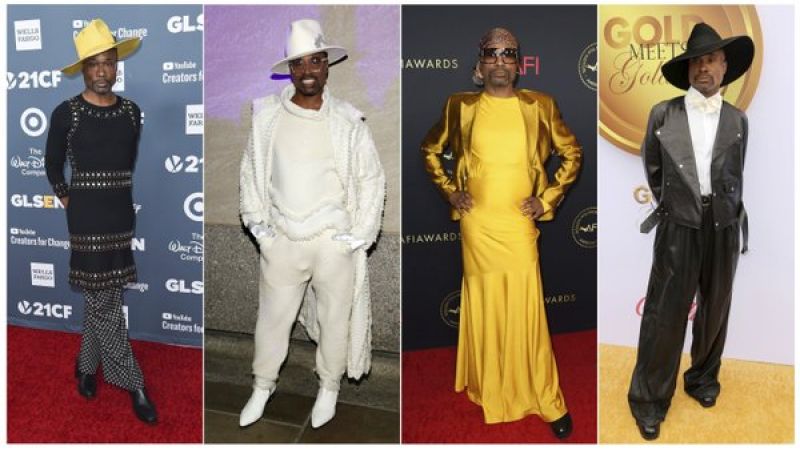 Potter's Stylefile from the past. (Photo: AP)

Porter said he’s just getting started in terms of pushing along the conversation. “People are actually listening,” he said. “I hope it opens up a dialogue of healing. I will always continue to do me. If there’s anything I’ve learned in the 49 years that I’ve lived on this planet, is that being authentic is the only version of the story that anybody should be.”

Porter has always been a fashion lover. This year, he was an ambassador for the Council of Fashion Designers of America for men’s fashion week in New York and attended a variety of shows featuring a variety of looks, from traditional to gender fluid. Now that awards season is over, and the fashion week cycle is finishing up in Paris, Porter said he’ll continue to wear whatever he likes, with a great number of designers on board to help with pulls from their lines and custom outfits.

“Pre-Golden Globes it was difficult,” he said of options available to him, considering that he’s not sample size. “After the Golden Globes it has not been difficult. You work with the people who work with you. You walk through the doors that are open. I’m never a beggar.”

In real life, or at least on live TV during the Oscars, Helen Mirren appeared ready for change, noting that both she and her co-presenter, Jason Momoa, were dressed in pink. “It just goes to show, doesn’t it, that these days a Hawaiian god and a very mature Englishwoman can actually wear the same colour. We can both wear pink,” she said to claps.Momoa agreed: “Finally. The times are changin’.”