The Duchess of Cambridge glittered in a diamond tiara that once belonged to Princess Diana for a state banquet at Buckingham Palace.

Kate, 36, joined husband Prince William, 36, and other senior royals for the lavish dinner hosted in honour of King Willem-Alexander and Queen Maxima of the Netherlands.

It was also the first time that the Queen, 92, spoke publicly about Brexit, saying in a speech that 'as we look toward a new partnership with Europe' the values shared by the UK and the Netherlands 'are our greatest assets'. 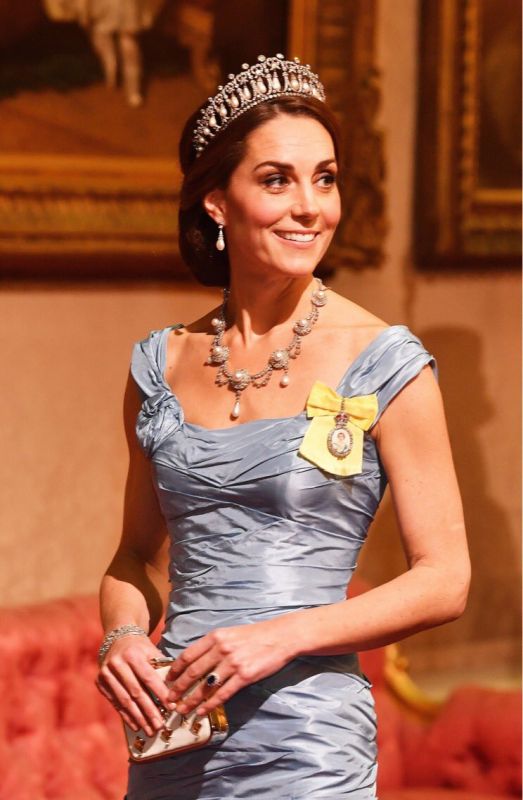 As per protocol, female members of both the Dutch and British royal families wore ballgowns and tiaras for the glittering event at Buckingham Palace.

For her third appearance at a state banquet, the Duchess of Cambridge channelled old school Hollywood glamour in a flattering blue gown by her favourite designer Alexander McQueen. The dress - made in a thick vintage-inspired fabric - featured a ruched bodycon fit on the torso and flared out in a fishtale style.

Kate finished the look with the diamond and pearl Cambridge Lover's Knot tiara owned by Princess Diana, which she also wore to the Chinese state banquet in 2015 and the Spanish state banquet last year.

Eagle-eyed royal fans also noted the duchess has been given the Elizabeth II Family Order - a jewel-encased image of the Queen on a chartreuse yellow ribbon which royal women wear pinned to their left shoulder.

The Duchess of Cornwall, 71, was the picture of elegance in an embroidered ivory coat dress and the Queen Mother's Greville tiara, which was loaned to her by the monarch for the evening.

The honeycomb-patterned jewellery piece, which was worn by Camilla to the Spanish state banquet last year, was originally made for society maven the Hon. Mrs Greville, who famously left her considerable jewellery collection to Queen Elizabeth, the future Queen Mother, on her death in 1942.

Meanwhile the Queen opted for The Girls of Great Britain and Ireland tiara, which is believed by many to be the favourite among her sizeable collection.

Skincare under the sun