The veil is made from silk tulle with a trim of hand-embroidered flowers in silk threads and organza. (Photo: AP)

Windsor: Meghan Markles wedding gown desgined by an acclaimed British designer Clare Waight Keller had a selection of flora, including an Indian Lotus, in her veil as she walked down flower-bedecked nave of the iconic St Georges Chapel today.

The veil of Meghans boat-necked, sculpted white dressgown represented the distinctive flora of each Commonwealth country united in one spectacular floral composition, Kensington Palace said in a statement. 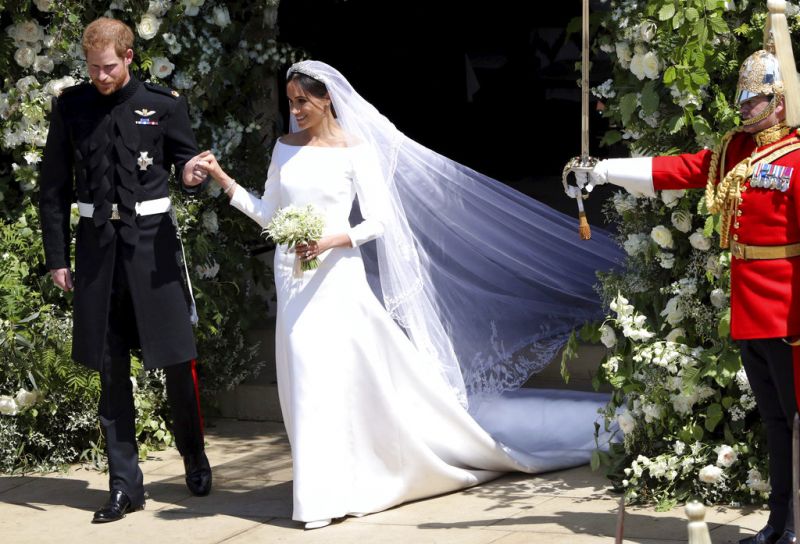 Meghan expressed the wish of having all 53 countries of the Commonwealth with her on her journey through the ceremony. Waight Keller designed a veil representing the distinctive flora of each Commonwealth country united in one spectacular floral composition, it said.

Indias Lotus, Pakistans Jasmine and Bangladeshs White Water Lily were part of Meghans five-metres long silk tulle veil which had selection of flora distinctive from every member state of the Commonwealth.

The veil is held in place by Queen Marys diamond bandeau tiara, lent to Meghan by The Queen. The diamond bandeau is English and was made in 1932, with the entre brooch dating from 1893.

Meghan wore earrings and bracelet made by Cartier.

The veil is made from silk tulle with a trim of hand-embroidered flowers in silk threads and organza.

Meghans bouquet included Forget-Me-Nots which were Diana, Princess of Wales favourite flower. The couple specifically chose them to be included in Meghans bouquet to honour the memory of the late Princess on this special day, the statement said.