Imagine you are watching an old movie in which a conversation between a mother and daughter is going on as they are prepping for the daughter’s big day. The mother has a gift for the bride. She opens her wardrobe, takes out an old saree, strokes it emotionally and gives it to daughter saying ‘this saree has been passed down to me. Now it is yours. Give it to your daughter.’

Cut to 2018. You wouldn’t see such a scene. Instead, you will see the family going out and buying separate clothes for each occasion. Clothes are to be worn a few times or for that particular occasion and then discarded.

The same applies to everyday fashion as well. Our wardrobes are overflowing with clothes. The textile industry keeps churning out and we keep buying. Our closets change according to trends. We are not bothered about the longevity of our clothes. It is in this situation that slow fashion, a global lifestyle, once a part of our culture and went to oblivion with the advent of fast fashion, gains relevance.

It is the  choice of dressing responsibly, keeping nature and mankind in mind. A follower of slow fashion would buy clothes that are made using locally available material, for instance the handloom of Kerala. It is lifestyle choice wherein you value your clothes as well as the hands that made them and stop chasing after trends.

“It has been a part of our tradition for a long time But over the last three decades, we have lost it to globalisation. American consumerism has taken over. A lot of brands have entered the scene,” says Ramesh Menon, a fashion consultant. But Ritu has a different take. “Whether it is the saree or salwar, we haven’t really been very jumpy like the West,” she adds.

Slow fashion, which can also be called ethical/sustainable fashion, aims to decrease the speed of production, consumption and disposing, by placing greater appreciation on one’s purchase. “There is a global call for it because next to oil, the textile industry is the second largest polluter in the world.

The gap in production and consumption has grown very high. Brands like H&M reportedly burned 19 tonnes of new clothes in Västerås in 2016, which is nearly twice as much newly produced apparel the retailer is accused of burning in Denmark, according to a recent report from local media outlet SVT,” says Ramesh, adding that fast fashion adversely affects nature, society and employment. “If there were 2 lakh handloom weavers in Kerala in 2000, it has reduced to less than 20,000 in 2018. We should nurture the handloom industry because it gives employment a larger section of women.”

Youngsters are usually the followers of the fast fashion trend. “Fast fashion is a fad wherein you are not encouraged to repeat clothes. Social media plays a role in spreading it,” adds Ramesh. 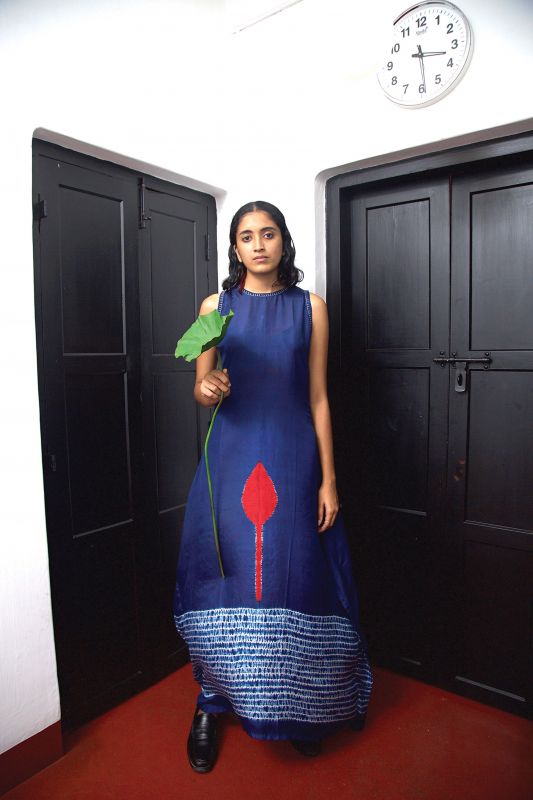 Though we are still behind in fast fashion, there are designers who have realised the significance of slowing down. Sreejith Jeevan of Rouka says, “We want our clothes to be timeless. We believe in clothes that have craftsmanship than in clothes that are trend-based. We believe in the concept of clothes made with love. Fashion has the ability to sustain and nurture craftsmanship in today’s context, when there are no kings as patrons as before. The fashion customer is the new patron of craftsmanship and hence making the products relevant will help in sustaining skills.”

He feels the focus should be on two aspects — the people who make clothes and quality. “We believe in partnering with the right people to be able to bring their skills into fashion markets. We have worked with Aranya Natural and with the Usha Silai initiative to co-create fashion. We want the customers to wear our clothes as much as possible and thereby make a long-term relationship with their clothes,” he says.

Will the future be kind to slow fashion? Ritu feels there will always be a mixture of fast and slow fashions due to youngsters. “They want something fun, happy and young and there is nothing wrong with that also. One shouldn’t be so dictatorial,” she feels. Perhaps as one grows grows older and realises the importance of mindful consumption, it would be easier to embrace the slow fashion movement.