A Vera Wang bridal gown, breaking away from the ‘all-white’ convention, from her latest bridal collection. (Photo: AP)

New York: There was a church wedding with a Madonna soundtrack, a sit-down tea at a fancy Midtown hotel, and yards and yards of tulle and trains at April bridal fashion week in New York. Several dozen designers hosted the media and buyers for appointments or put together runway shows and presentations for the twice-yearly celebration of bridal dressing, this time featuring looks for spring 2020.

Here are some highlights:

She outdid herself, filling every seat in Midtown’s huge and historic St Bartholomew’s Church, expanding her guest list to include regular brides.

This collection, a mix of modern mini-dress, shorts looks and more traditional gowns, had a simple celebratory sentiment of gratitude.

In return, she gave us adorable flower girls in pink holding bedazzled faux candles, messages of love emblazoned on bodices, live singers belting from the audience and at the front of the church, and a Madonna soundtrack driven by “Like a Prayer.” In collaboration with her fellow designer of Lebanese descent, Joseph Abboud, she also gave us embellished looks for grooms, including a heavily pearled white tuxedo shirt worn under a tailored navy jacket.

For some looks, Acra broke out of the traditional veil mould with sculptural tulle head pieces, putting sunglasses on a few. Many of these brides had swagger for days. Her church runway was adorned with huge arches of red, pink and white flowers, adding to the fun. “I wanted to empower all women because I had to empower myself when I was 17 years old,” she told The Associated Press after the extravaganza. “It was a celebration for all of us human beings.”

Tran Phuong My, originally from Ho Chi Minh in Vietnam, launched her first bridal collection with a challenge to tradition, showing looks in bright red, using long black gloves against white, and fashioning helmet-shaped and flat disc head pieces. Phuong My, a graduate of the Academy of Art University in San Francisco, is a luxury ready-to-wear designer who generated some buzz with her non-bridal debut at New York Fashion Week for fall-winter.

For bridal, a harpist and quartet performed at Academy Mansion on a prime East Side block as her models walked amid flower blooms on twigs in gowns, jumpsuits, suiting and skirts, some with origami-inspired asymmetric folds. “For this collection we want the woman to be more of a warrior,” she explained in a post-show interview. 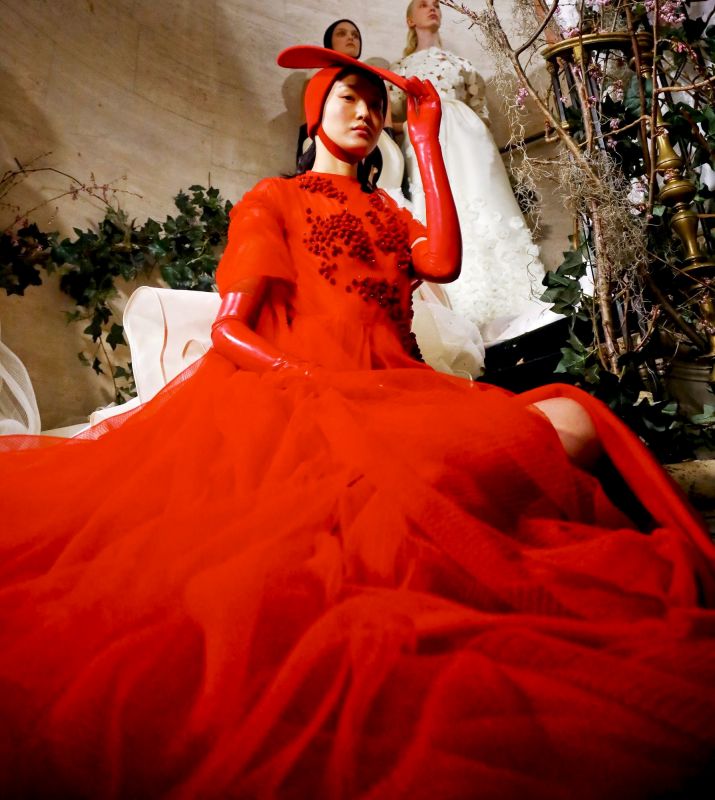 An elegant red bridal gown from the Phuong My bridal collection showcased at the NY Bridal Fashion Week 2019. (Photo: AP)

Someone, Phuong My said, who gets married but wants to “find their own place” and be truthful to themselves is the customer she’s after. Weddings, she said, don’t always have to be white. “Red is one of the most popular colours for bridal in Asia,” Phuong My said. “A little colour doesn’t hurt anyone.”

She doesn’t often appear personally for private presentations at her bridal design studio, but this time she did. And her couture looks in muted colour, visible boning and draped silk tulle lit up with outsize floral embellishment she used magically. Her statement blooms came at the collars, on sleeves, as petticoats and as corsages.

There was a deliberate randomness to her collection, intended to surprise from all 360 degrees. There were long trains and delicate pieces that trailed from the upper arms.Looks in blueberry, pistachio and the lightest of mauves were mixed with blushes and whites. For ready to wear, Wang goes heavy on the blacks and greys, to the chagrin long ago of fashion powerhouse Anna Wintour.

“But then I come to bridal where everything should be white. I always can’t stand it,” Wang said. “I just have to mess it up. That’s the rebellious streak in me. This was her 59th bridal collection and she said it’s important to her to reinvent. She’s been experimenting with colour for bridal for a while now.

Wang said the late Karl Lagerfeld once told her: “You know, Vera, I do all these outrageous things because they come and they still buy the Chanel bag. But he said I have to shock. If I don’t do that what interest is there in the brand?”

This hand-done bridal collection, which sells for up to $30,000, is couture by anyone’s standard. “It’s really a collection based on a certain freedom, but to get that freedom takes incredible technique,” Wang said.

Fairytales, dreams, clouds, Ophelia. These are just a few of the things that inspired Di Santo’s collection. She attached a flowing, floral-printed cathedral train to a bandeau and mini-skirt with feather accents, worn with long bell sleeves. One trumpet gown was embellished with silvery stars and came with a bottom done in pleated circles.

A strappy backless satin gown was shown with a romantic little tulle stole that fluttered behind, all in white. “The dress is more than a dress. It’s a personality,” she said.

While she included traditional white, Di Santo isn’t afraid of patterned and colour bridal gowns. “Colour is very important for me. Different patterns, different silhouettes, describe who we are,” she said. “I love colour. Being Italian, we love colour.” 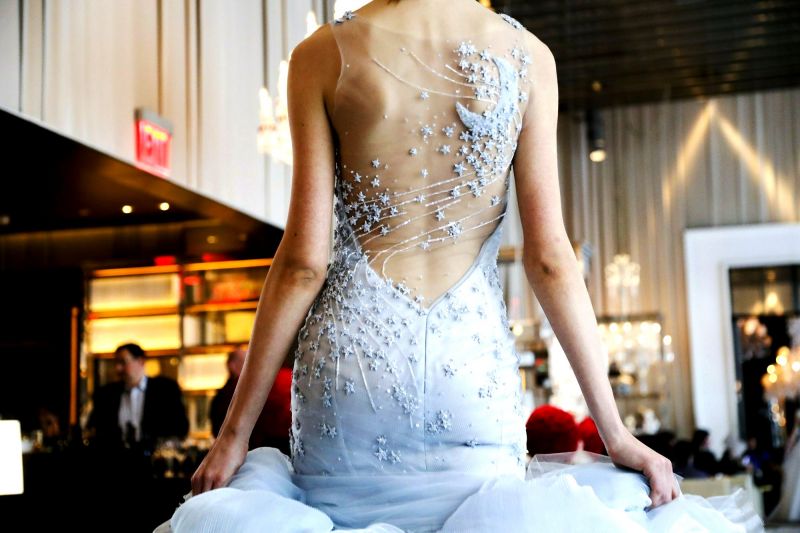 One of her designs was a high-waisted short set with pink floral embellishment, paired with sheer leggings adorned with stars at the thighs. The jacket was worn open with nothing underneath. Di Santo treated her guests to tea at the luxurious Baccarat Hotel in Midtown, walking her models through intimate tables as the crowd sipped and nibbled on finger food.