Mr Gay World India 2018: One needs to accept themselves as they are

Maiti who is working as a senior research fellow in the field of cancer drug discovery from a reputed institute in Kolkata, stumbled upon a modeling career after his friends pushed him towards getting into shape.

Maiti who is working as a senior research fellow in the field of cancer drug discovery from a reputed institute in Kolkata, stumbled upon a modeling career after his friends pushed him towards getting into shape.

Speaking to this correspondent, Maiti says that the win makes him feel like he is on the top of the world. The winner goes on to thank Sushant Digvikar, the director and producer of MGWI along with Sanket Sveronic and Darshil, who continuously worked to groom them and cared for them like members of a family.

“Being from a middle class rural background I had to face many challenges to be in the position that I am in today. The win made me feel that finally my struggles got acceptance,” he says, adding, “I will take this opportunity to inspire the thousands of struggling souls out there who are seeking acceptance too.”

Mr Gay World is a part of celebration of the LGBT community globally so that people from different countries can know the real challenges and achievements of different region and can highlight it into the global platform. 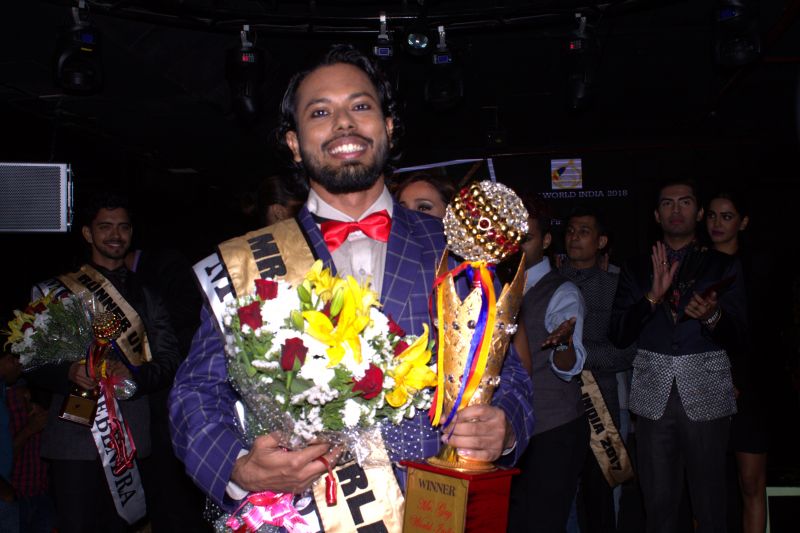 “It is very important to send a representative from such a country that has not yet acknowledged the right of the LGBT community to speak about the discrimination, fights and social issues we are facing here,” says Maiti, adding it will also help the community in India experience firsthand what other countries are doing for the LGBT rights.

From being a regular kid trying to come to terms with his sexual identity to the proud winner of the Mr Gay World India 2018, it has been a long journey for Maiti and the young winner says that the path has been anything but easy.

Maiti recollects that after his father passed away when he was nineteen, one of his friends, who, incidentally is his sister’s fiancé, took over all his responsibilities.

“He was very affectionate to me and that made everyone in our hostel think that we were both gay,” Maiti says, adding that soon they were driven out.

The incident pushed Maiti to interact with other members from the community and later when his friend went abroad, Maiti came out to him.

Maiti would go on to come out to his other friends and colleagues, and received mixed reactions to his orientation. What shocked him most was that even the scientific community was judgmental towards him with many saying that interacting with the LGBTQ community had turned him gay.

“I came out to my family in 2016,” Maiti says. While his sister eventually accepted him for his happiness, his mum who at first tried to cajole him into believing that it was just a phase, is still coming to terms with his orientation.

Now that he has won, Maiti feels that it is a formal recognition to his initiative and work.

“My focus is now on to represent my country at world stage in Mr. Gay world in South Africa this summer,” the young winner adds.

He goes on to say that he wants to help the underprivileged members of the LGBT community who are lagging behind and the uneducated people who live in slums in urban places and don’t know how to deal with society.

“I want to help them uplift themselves in a dignified way,” Maiti says, adding, “They are mostly invisible and neglected. I want to assure them that we all are besides them. My other mission is to conduct gender education programs among school children and science researchers to make them sensitised so that our future generation can live in a society without any discrimination based on gender identity and sexual orientation.”

Maiti agrees that the win puts him in a position where he can represent and lead, not only members from the community, but the youth, at large. The winner recollects that as a youngster, alienation was always a turmoil and there were no role models to look up to. This made him realise that with the title he has the opportunity to represent all that is good and inspiring from the community.

“I want to work in such a way that general perception could change about community and it can inspire not only the LGBT youth but society at large,” Maiti says.

Youngsters, in India and around the world are still finding it difficult towards accepting their sexual identity and coming out. On being asked for his advice to them, Mr Gay World India says that accepting that fact that we are living in a heteronormative society where growing up as a child one is expected to have a certain kind of preference and mannerism is of optimum importance.

“They are so many stereotypes attached to a gender identity. Everyone wants to be loved and accepted the way they are and being different becomes a challenge. First one needs to accept themselves as they are. The coming out happens to oneself and then to rest of the world. It's a long process, having a friendly support group helps. Do not hesitate to reach out for help if you need it,” he concludes.

An eye for an eye

It's not child's play