Marc Jacobs closed out New York Fashion Week with an operatic finale, playing the aria from "La Wally" used in the movie "Diva." And the rest was silence. Literally. The models walked in the cavernous, unadorned Park Avenue Armory with no soundtrack, their every footstep audible.

At Michael Kors, the soundtrack was live: Sara Bareilles sang four songs, ending with her hit "Brave." Some highlights of the final day of shows:

MARC JACOBS' HOLIDAY OF THE MIND

Marc Jacobs is known for beginning his shows exactly on time, so at 6:01 p.m. on Wednesday, the last few ticketholders were scurrying frantically on their stilettos, heels clacking on the wooden floor to avoid getting caught in the center of the cavernous space as the models began their journey. This fashion show was waiting for no one.

Like he did in February, Jacobs held his runway show in a spare, undecorated Park Avenue Armory, rendering it utterly unrecognizable from the beginning of the week, when Tom Ford had turned it into a luxe nightclub setting bathed in purple light, with waiters serving vodka cocktails. Jacobs also had his models walk slowly and deliberately in total silence, playing music only at the finale, when the aria from "Diva" was piped into the space.

But the clothing was anything but spare: Jacobs' models wore brilliant colors like orange and yellow, and big, bold floral prints. Silhouettes, as he explained in his show notes, were "exaggerated, decadent and exotic" - a result of a vacation over the last few months.

However, it was a vacation of the mind only. "While friends vacationed, we took a holiday in our heads and went somewhere," he said, adding that the collection had come from a reimagining of previous seasons, "somewhere beyond the urban landscape of New York City."

The most notable look: Turbans. Everyone had them, and they came in all colors - partly inspired, Jacobs said, by Kate Moss, who famously wore a gold one to the Met Gala with Jacobs in 2009.

As they were at Calvin Klein, tassels were definitely a favored touch for accessories like bags and shoes. Speaking of bags, some were enormous, and some were tiny - part of those exaggerated shapes Jacobs spoke of. Some were fanny packs.

Much-followed models Kendall Jenner and Gigi and Bella Hadid all walked, but the honor of closing the show went to the week's breakout star, newbie Kaia Gerber - daughter of supermodel Cindy Crawford.

In the audience were Zosia Mamet, Courtney Love and Nicki Minaj, in a revealing black bustier. "It just seemed super surreal," Minaj said on her way out. "Everything was next level. Colors! I loved it."

MARCHESA INSPIRED BY ADVENTURES OF AN HEIRESS

Design duo Keren Craig and Georgina Chapman of Marchesa say they were inspired by the travels of an heiress adventurer when dreaming up their latest collection.

"We were looking at a rather incredible Edwardian (era) woman called Aimee Crocker who wrote a book called 'And I'd do it Again' and she had a rather fabulous life," Craig said backstage Wednesday.

"Ultimately it's a very quintessentially Marchesa collection," added Chapman. "I think we view our collections as a storybook continuing from one season to the next. ... Our pieces we want to see as timeless, not as pieces that are done for the season."

Looks on the runway featured a one-shoulder ball grown in blush and a tulle gown with cape sleeves, pearl necklace embroidery, and a plunging neckline. There was also an ivory cocktail dress with a satin bodice and ostrich feather skirt.

Craig and Chapman co-founded the Marchesa label in 2004.
"It makes it so much easier working with your best friend," said Craig. "We always have a laugh together so I think that always takes the edge off. Sometimes something gets really stressful and then you can just end up laughing about it and being like, "Well this is a ridiculous situation."
Actresses Jennifer Morrison, Victoria Justice, Dylan Penn, Olivia Culpo and Nina Dobrev sat in the front row.

Sara Bareilles offered the live soundtrack, singing Otis Redding's "(Sittin' On) the Dock of the Bay," Carole King's "(You Make Me Feel Like) A Natural Woman" and her own "Love Song" at Michael Kors. She closed out the sleek and feminine show with her hit "Brave." 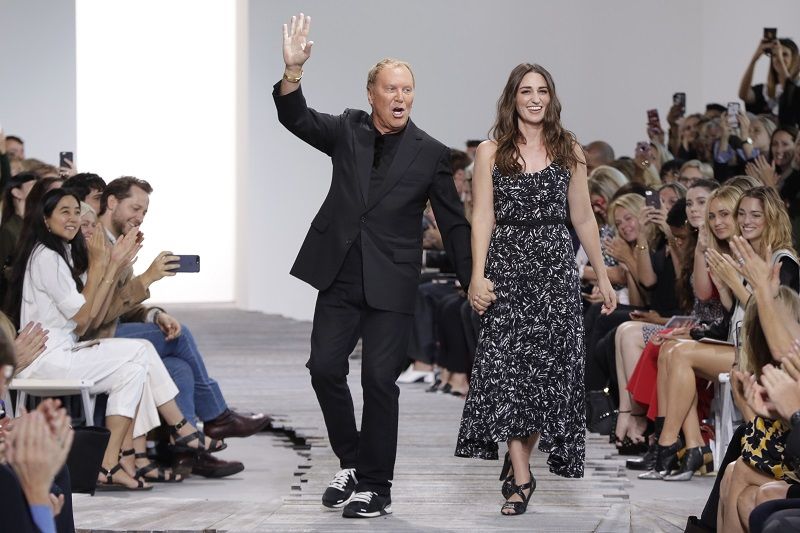 Inspired by his first trip to the South Pacific, Michael Kors created a beach collection for spring, dressing his models in very relaxed, wearable pastel dresses and skirts featuring palm frond patterns and tie-dye. His choice of footwear was downright carefree.

"I thought, 'How can we blend that sort of big city life with this barefoot beach life? Certainly in my career we have never shown evening clothes with flip-flops. We are!" Kors said Wednesday.

The male and female models - including Kate Upton, Kendall Jenner and Bella Hadid - strutted along weathered wood planks meant to resemble a boardwalk in front of a downtown audience that included Nicole Kidman, Naomi Watts, Catherine Zeta-Jones and Yang Mi. 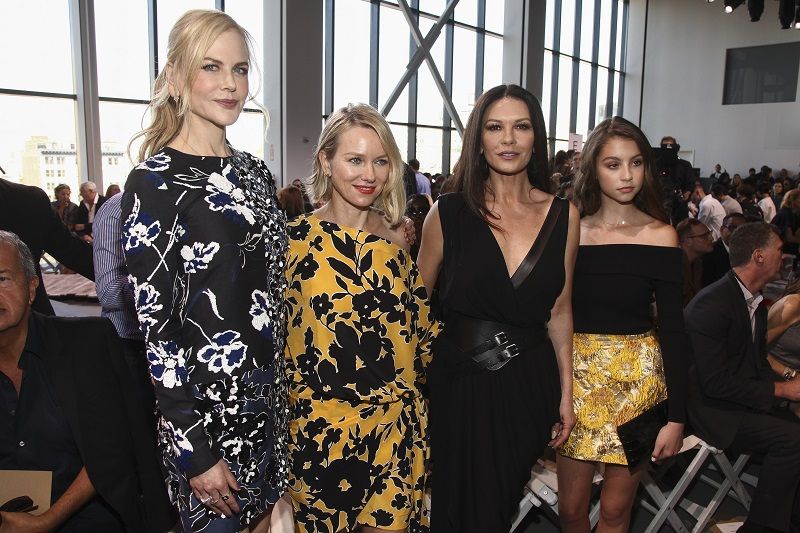 There were chunky sweaters, classic trench coats and double-breasted blazers. The dresses and skirts were in linen and crepe, in shades of pale pink, lavender and loads of blue.

Strips of material streamed out of some of the cuffs, and shirt tails spilled free from jackets. Kors said much of the tailoring was meant to "catch the wind." Sequins sparkled seductively on some of the most interesting layered dresses.

Backstage, Kors said his customers know what works on them and his clothes know no political divide. Michelle Obama wore Kors and Melania Trump wore one of his belted coat dresses on Monday.

Zeta-Jones came with her daughter, Carys, who complimented her famous mom for her fashion sense. "I should put her in front of the camera more often," joked Mom.

A DESPERATE HOUSEWIFE, AT FASHION WEEK

Before her first runway show at New York Fashion Week, Eva Longoria buzzed around backstage Wednesday like a seamstress. She cut extra threads from garments, examined hemlines and pointed out clothing that needed steaming.
"This has been months of preparation," said Longoria, who said she has been sewing since she was a child. "It's been so much fun and it's a dream come true, really." 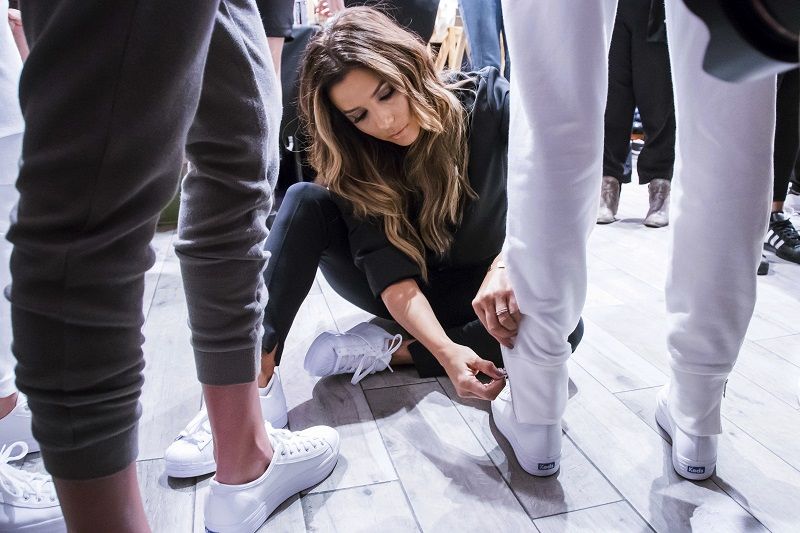 The show opened with a segment she calls #SetLife, based on Longoria's own career. After starring as Gabrielle Solis on "Desperate Housewives" for eight seasons, Longoria has spent more time behind the camera as a producer and as a director.