Tired of examining rape incidents in the society, 22-year-old Shreya Arora, who is a graphic design student, turns the tables by using art forms to show her angst. Through her work, she questions the vicious practice of victim-blaming and she is also working on a series that uses different media to look at aspects that contribute to rape culture.

“I think art is anything you make with the goal of self-expression. It doesn't have to be visual; it could be a music piece or a poem as well. It's at the opposite end of the spectrum from the kind of education I'd had in school, where I was evaluated based on rights and wrongs. Design for me is somewhere in the middle of that spectrum, where you make what you make for an audience other than yourself, with a specific purpose- to create awareness, or to start a conversation, or explain something in an impactful way. I would say what I do is much closer to design than art, although it definitely requires a lot of self-expression and reflection as well”, says Shreya when asked about what the word 'art' means according to her.

Shreya has always been a vocal feminist, and realised recently that as a designer, she can take up personal projects that let her use her skill-set to start difficult conversations.  “Often, people shy away from talking about subjects like victim-blaming with their families since it is a very sensitive subject. If I had to speak to my elders or school teachers about something like this out of the blue, there would always be a sense of apprehension. But on the internet, I see people share these projects with their families, forward them on WhatsApp groups. It's always easier to show rather than tell with some conversations, and I think that's where design comes in”, says, Shreya. 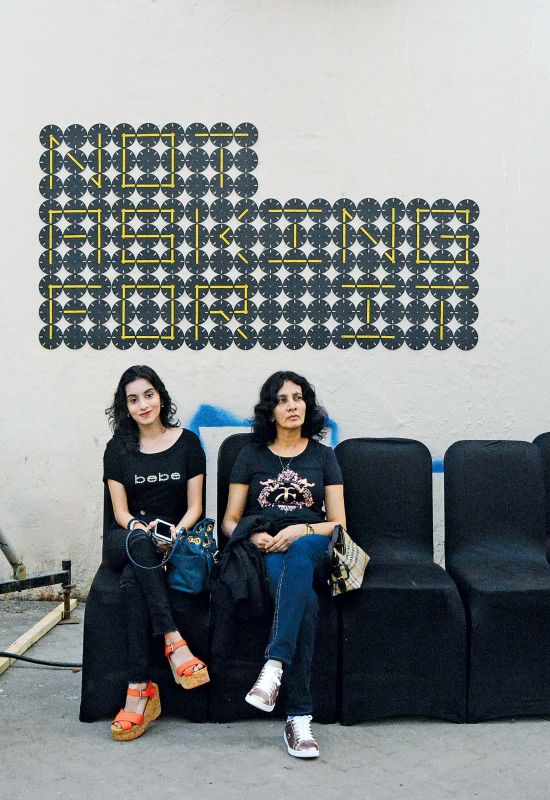 135 clocks join hands against victim blaming at We The Women summit, Mumbai.

The thought between 135 clocks
A few weeks ago, I got the opportunity to design an installation for 'We The Women' summit in Mumbai. I knew I wanted to do something on similar lines and then tried to answer the question “Why were you out so late?” Sadly, women have been sexually assaulted at every time of day and night, no matter how they were dressed or who they were with. So with 135, I wrote the phrase 'Not Asking For It' using only clock hands. Each letter was made with a grid of 9 clocks. 15 letters overall made 135 clocks, which is why the installation is called 135.

What contributes to rape culture
People tend to deal with rape in a curative manner, thinking that tough punishment is deterrent enough for rapists in the future. Pop culture and cinema have a huge influence on society, and it turns into a vicious cycle. Currently, this version of love that disregards consent is popular in society, so mainstream movies and songs and magazines cater to it. Change is definitely taking place, but not fast enough and we need to focus on eradicating the cause that is rape culture, instead of just the effect that is rape.
“I also wanted to show by example how visual design can be a very powerful tool to start difficult conversations, and that sometimes, the best way to create behavioral change is by 'making something pretty'.”

Gender
empowerment is too general a term and therefore often misleading. We live in times of growing violence — of violence unchecked, encouraged and often the means by which the govt. governs. Women are often hardest hit in such a
situation. For overall empowerment you need a right mix of economic, political, social, psychological circumstances. The state needs to play a big part in ensuring this. Today our government is doing the very opposite and is also creating an atmosphere where violence is ok, is justified. The recent Hyderabad horrific violence answered by state violence, proves it. Art is one important and strong medium with which we can restore people's faith in themselves and each other.
Maya Krishna Rao, theatre artist

Get that posh hair

How to Use Coconut Oil on Your Face Overnight?