Much of the conversation on improving women’s lives in the country to date is superficial and a lot needs to be done on inclusivity. (Photo: Representational/Pixabay)

The year is 2019, and despite the many efforts of second and third-wave feminism, women in India still have to strive under the patriarchy. From the way we are expected to dress, to our socialisation in society and any given career path - there seems to be an all-judging eye hovering. And urban metros are no exception to the norm. Low confidence and self-esteem issues are by-products of this social conditioning that teaches women that autonomy to one’s body is a no-no. Societal expectations are projected onto aspects as simple as a woman’s hair.

According to a recent study conducted by Hansa Research for Dove, one of the biggest biases people in Indian society have regarding a woman’s hair is that they should not keep their hair short (87 per cent). This, along with many other irrational contentions (see fig below) are the general sentiment shared by both men and women between the ages of 18-55 years of age in India. 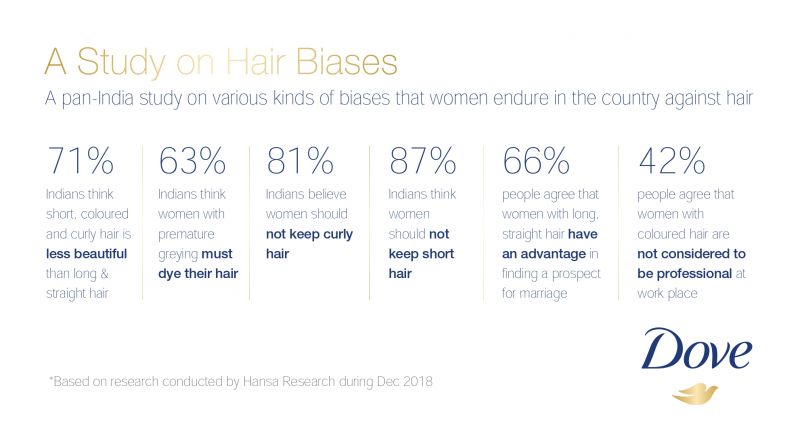 Much of the conversation on improving women’s lives in the country to date is superficial and a lot needs to be done on inclusivity. (Photo: File)

Body image issues are an equally growing concern for women in this country as well. On one hand, you influence a vast majority of people asserting the importance of being thin and healthy; and they will do everything in their power to ensure that fat person are shamed for their weight under the pretext of pushing them to tone down. And in the next breath, you will have the same people shame women with eating disorders which developed because of this fat-shaming. And this problem amplifies with the presence of social media. Fortis Healthcare recently conducted a study on women between the ages of 15 and 65, across 20 cities in India; from which 89 per cent stated an uncomfortable feeling about their selves when they read comments about other people’s appearances on social media platforms.

The solution? Body positivity. Body positivity is essentially finding peace within your skin, regardless of society’s judgments about you. And a lot of women seem to be letting go of what is expected of them and learning to love themselves instead. Arielle Noronha, a 22-year-old transwoman based in Mumbai, talks about how she has learned body positivity, “For trans women in India, it’s always a struggle to meet society’s expectations, especially when society hardly even knows us.

For years, we have been framed as ‘predators’ or ‘creepy men’ if we don’t present female. And in the next breath, we will get shamed for opting for gender-affirming surgeries because that would make us ‘fake’. At the end of the day, loving yourself is what should be paramount. If getting the surgery done makes you feel more fulfilled? Go for it! If you like the way your body is despite what others say - stay true to that. As long as you are doing it for yourself, no one should take away your self-autonomy.”

And just like her, many women are challenging the norm in terms of establishing themselves in male-dominated spaces. For instance, women pursuing careers in the field of technology (a stream that has been historically overflowing with men) are now booming; with 90 per cent of Indian women believe their gender positively impacts their ability to pursue a career in technology, as per a Booking.com survey. Yet, 49 per cent of Indian women currently working in tech say gender bias during the recruitment process is holding women back from entering the industry.

Much of the conversation on improving women’s lives in the country to date is superficial and a lot needs to be done on inclusivity. This is why inclusivity and empowerment projects led by people need to be intersectional, to ensure maximum impact.

Summer hair in the wintertime