DECCAN CHRONICLE. | SNEHA K SUKUMAR
Published Mar 4, 2017, 12:00 am IST
Updated Mar 4, 2017, 6:16 am IST
Bengaluru couple has taken haute couture, and spun an ecological and sensitive wand of goodness around it with an upcoming fashion weekend.

In a fast-paced, spirited industry like fashion, it might come as a bit of a surprise to think anything can be slow. Yet, Bengaluru-based Pradeep Krishnappa and Rema Sivaram are doing their bit to spearhead the slow fashion movement in the city.

Having organised Bengaluru’s first slow fashion weekend that encouraged several designers to be a part of it, and ahead of its second edition on April 7, the duo tells us why it’s time to embrace the movement that not just respects the planet, but its people too.

In their 30s, Rema and Pradeep are the founders of Fairkonnect, a studio that bridges the socially aware buyers to the artisans, to ensure ethical trade through fair trade practices.

A far cry from typical mass-produced fashion, they are steadfast on their goal – “To multiply the number of consumers who shop consciously and use their power of choice as the agent of change, discourage consumers from buying fashion for which someone has already paid a price and, to popularise Fair Trade – sustainable production methods, fair wages, lower carbon footprints, and (ideally) zero waste,” they explain.

Though ‘sustainability’ has been the buzz word in industry circles, it’s not the fad that powers Rema and Pradeep. Their experiences have been carefully crafted through their childhoods. “I used to make garments out of repurposed fabrics as a student while helping my father at his factory,” recollects Pradeep, who has also served as the vice president of Fair Trade Forum India.

His stint working with artisans in North East India has further strengthened his resolve. “I understood how a collective effort can make artisan empowerment simple and how urban lives can support these crafts by making small choices in our everyday lives,” he says. 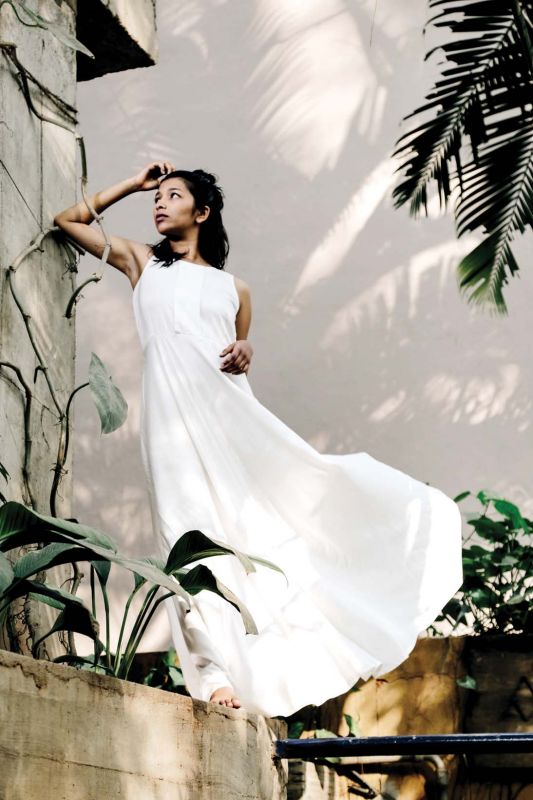 A model in the duo’s ethical clothing line

Rema’s inherent instinct for design goes back to her mother. “My mother is my inspiration to go the sustainable way. She stopped wearing mulberry silk after learning how it is made. Being a very traditional South Indian, it was a bold decision for her to say bye to her Kanchipurams,” she muses.

If you are a rookie to the concept, here’s a beginner’s tip: slow fashion embraces that which is created without harming the planet – raw materials like organic cotton, non-violent silk and alternate fabrics like fibres made from the lotus stem (!) are celebrated.

“In fact, our ethical clothing line, Ethic Attic premiered a collection made from the lotus fabric which was featured at Innatex, Europe’s largest international fair for sustainable textiles,” says Rema, beaming about being the only ones from India, and heading out to the Fair Trade Show in Toronto, Canada and across Europe next.