From recycling to eating local foods that are sustainably farmed, people are getting increasingly conscious about going green. So, it comes as no surprise that “eco-friendly fashion” has started trending and many celebrities don eco-friendly outfits.

Describing the event, Shravan says, “Nearly 84 countries are going to be a part of this event and I am thrilled to go there. It is a one-of-its-kind event and will present only the most creative and beautiful sustainable designs.”

While many other big Indian designers also wanted to be a part of the event, Shravan was chosen for reviving the lost Ahmedabadi art form of Mata ni Pachedi, which translates to ‘Mother Goddess temple cloths’ (used to decorate idols). It is one of the few craft practices that is keeping in close touch with its history, existing as a traditional hand craft in a fast modernising India.

Ask Shravan, who has been working with weavers and Kalamkari artists, about what inspired him to go all the way to Gujarat, and he says, “While I was researching, I found that the origin of Kalamkari is from Gujarat and more specifically from Mata ni Pachedi. I realised that the art form was endangered and that the artisans who    make these saris, the Chitara family, were not paid properly as well. The intricate designs and motifs of Mata ni Pachedi interested me a lot and I decided to take this further.”

Shravan adds, “I think I was selected because sustainable fashion was one of the most important criteria of the event. With the advent of technology, the new textiles that we see in the market have many chemicals which can harm the skin. However, old art forms still use natural cotton and silk which are not only biodegradable, but also skin friendly.” 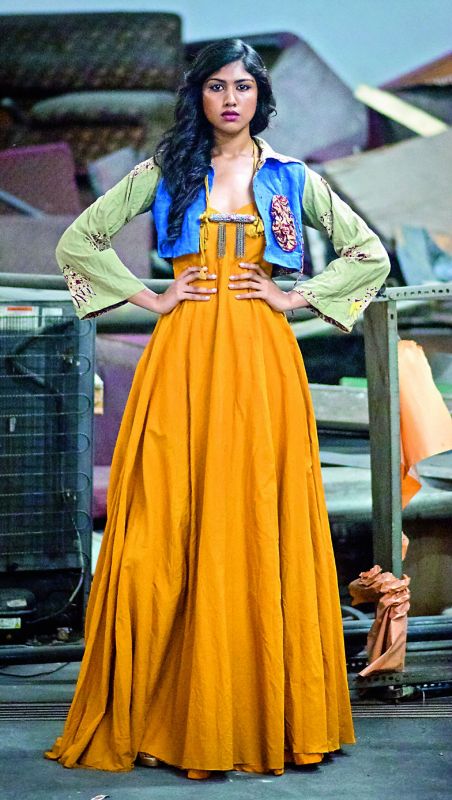 Many big names from the fashion industry are going to be a part of the event such as Arcaro Couture from Australia, Sylvia Calvo from Spain and Connally Mcdougall from Canada. Talking about his collection The Mobile Shrine, Shravan says, “The theme for the photo shoot revolves around the mythological tale of Vishwamitra and Menaka. I have used many saris, flowing gowns, jackets etc. incorporating khadi and silks. The designs are mostly the traditional designs of Mata ni Pachedi, and I have used traditionally made natural dyes using turmeric, jaggery etc.”

Shravan believes that it is a good time to be associated with the Indian textile industry. “The whole world is looking at us and traditional designs. I have met many international designers who praise our ancient weaving techniques and designs,” he says, adding, “Designers have many opportunities. Weavers, too, are getting their much-needed due and hence, we are able to revive many art forms which were lost over the years.”

Mystic mane: Aura hairstyles for the spiritual ones