The sight of the axed trees spread along the road was what instigated the outrage, which eventually took the form of a full-fledged protest

Between November 8 and 13, close to 99 trees have been felled along the Tellapur Road in the wake of road widening happening there.While tree-felling is a punishable act as per the Indian Forest Act, under which each state in the country has laid down rules and regulations against the act of tree felling, it would appear that the Act is but for the common man.

Tree felling is punishable but government officials don’t seem to care. They have felled about 99 trees along the Tellapur Road for road widening, and citizens’ protests seem to fall on deaf ears. 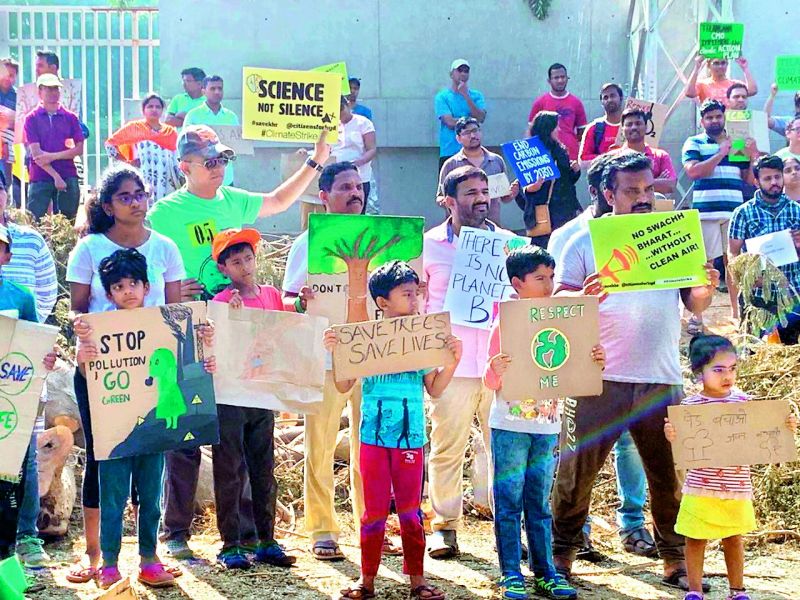 Between 8th and 13th November, close to 99 trees have been felled along the Tellapur Road in the wake of road widening

Take for instance the case of Nagamani who runs a girl hostel in the Shiv Bagh Colony. On Thursday, she was booked by forest officials under the WALTA Act and fined Rs 17,000 for cutting a tree at SR Nagar. The tree she cut was in front of her hostel building. Similarly, some months ago on 4th August, a man in Siddipet was fined Rs 3,000 by the Horticulture officials for cutting some tree branches.

But no action has yet been taken against officials who ordered the felling of the 99 trees along the Tellapur Road.

The sorry sight
The felling along the stretch began on 8 November under the supervision of a contractor appointed by Roads and Buildings Department (R&B), and it took just five days, till 13 November, for 99 trees to be axed. That’s not all. We hear that R&B have been granted permission to axe 134 trees on the stretch from Nallagandla to Tellapur.

The sight of the axed trees spread along the road was what instigated the outrage, which eventually took the form of a full-fledged protest. About 500 people including local residents, environmentalists and civil society activists formed a human chain near Nallagandla to protect the trees. The group also consisted of several children shouting slogans, braving the heat as they walked along the stretch. As a symbolic gesture, children tied a protective thread around the other trees marked for felling. But the reactions from the concerned individuals were not sufficient to stop the axing. Later,when the efforts of those were streamed through social media, they spread the outrage to others too, creating a collective called ‘Save Nallagandla Trees (SNT)’. As the days wore on, the upsetting sight of axed trees spread along the road on both sides outraged more residents.

Losing the balancing act
Despite the uproar, trees are still being axed, making the common man wonder if laws are only for them and not for government officials. We spoke to Kaajal Maheshwari, environmentalist and sustainablity expert, about the situation. “Environmental advocacy and awareness, though at a nascent stage, is gaining importance like never before as climate catastrophes, be it droughts, floods and cyclones as well as health issues specially related to pollution is on the rise. Across the country people have taken up arms against tree-felling in the name of progress. Several movements, including ‘Save Aarey Forest’ in Mumbai, ‘Save Aravallis’, ‘No Steel Flyover’ in Bangalore, ‘No Cutting Trees’ in Delhi and our very own ‘Save KBR’ and ‘Save Nallagandla Trees’ are gaining phenomenal citizen support. Citizen-participation is the key, the more they understand sustainable solutions and demand action and show willingness to adapt for the sake of their future generations — the faster there will be a shift,” Kaajalsays.

Even as residents are up in arms about the felling of the 99 trees at the Tellapur stretch, the Wanaparthy District Collector Sweta Mohanty shares her perspective on the matter. “A couple of months ago, we undertook an expansion drive in the district. However, we wanted to translocate the big trees for longevity. So we hired an expert recommend by GHMC and were able to successfully translocate a few trees. However, we were told that if the tree is very old and deep-rooted, we can’t translocate it. We know how significant it is to save the environment, and we have been organising all the green initiatives (like Haritha Haram). But we are always looking at balancing both environment as well as the developmental activities required in the society, and I am sure that the GHMC officials would have definitely looked into the viability of these trees translocation. But I guess sometimes, it is a tough call,” Sweta says.

Uprooting a future
But clearly SNT members don’t think a balance means tree-felling, and certainly not in the numbers it’s done. They have got together and discussed the issue with the officials from Forest Department, TPC and R&B and have proposed that the civil society, especially the residents of Nallagandla-Tellapur Road must be consulted before any development activity is initiated in the area.

Sriparna Dash, a resident who works as a HR professional, believes developmental decisions need to be taken keeping in mind the environment. “We are not against development but let it not be at the cost of the future generations. By cutting trees, we are not only reducing bio-diversity, driving away birds and insects, but also taking away the future of our children. We owe it to the future generations to look at sustainable development. The citizens and environmental impact officers should be a part of any development-related decisions that are taken at the expense of the environment. Why not focus on better public transport instead? Give the citizens information and data, let them decide whether they want a tree or a road,” says Sriparna.

Let's heal the planet and heal ourselves