Kodaikanal: Often referred to as the princess of hill stations, Kodaikanal goes on with daily life with the tourism industry being the main pillar of its economy as hundreds make a living out of it. But there is more to all the serenity that the place has to offer.

The locals constantly draw their inspiration for finding answers to questions about the purpose of life from the ‘great soul’ who constantly made us think during his lifetime - Mahatma Gandhi.

The Indian Nirman Sangh has been spreading the words of Gandhi and making a difference in so many lives. David Barun Kumar Thomas, the founder of the organisation, has been instrumental in this regard as he had drawn inspiration constantly through his extensive reading on Gandhi. The Gandhi farm run by him has served as a learning centre for many- participants - both women from the self-help groups under the organisation and people from near and abroad. 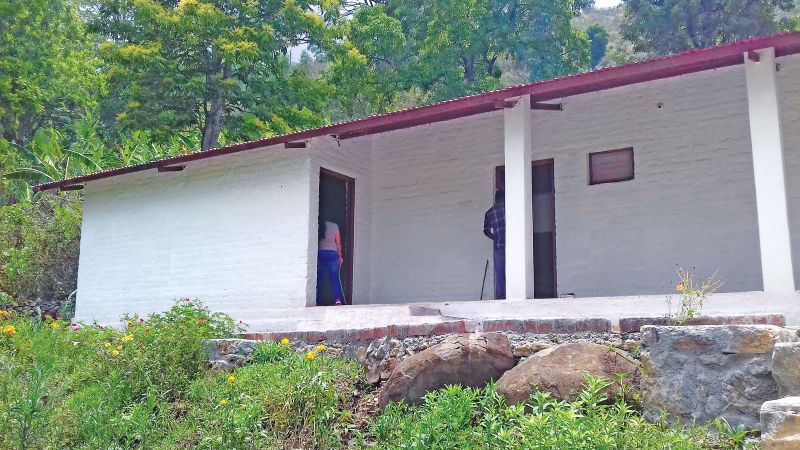 Gandhi centre for human values nestled in the Gandhi farm at Vadakavunchi, around 25km from Kodaikanal lake.

While Gandhi’s ideologies and principles are constantly being embedded into the hearts of many, the question is where David got all the inspiration from as he resides in the remote hill station in Dindigul district.

“Once I was a part of an organization called Gandhigram near Dindigul. I have seen still there are people who dedicate their lives to helping others. Then I started reading more about Gandhi. I found out Gandhi had foreseen the modern problems back then, so many years ago, and also talked about the solutions.”

The ardent Gandhian makes a reference to capitalism, industrialisation and Gandhi’s famous quote, “The world has enough for everyone’s needs, but not for everyone’s greed.” And the love for Gandhi has penetrated the hearts and souls of the villagers.

“It was their wish that a Gandhi statue be installed at Mannavanur village. And it came up through their money only.  We have an annual Gandhi Jayanti festival. All dressed in khadi,  nearly 2,000 women take out a procession chanting Gandhian slogans,” he recalls fondly after having sparked the thirst for knowing more about Gandhi among the population in the hills.

David aims at portraying Gandhi in a different light in his class, aside from his contribution to India’s freedom struggle.  “Basic Gandhian ethics and principles, his values- non-violence,  ahimsa, tolerance, Gandhi’s approach to conflict resolution, social harmony - we look at these things. We see how we can put into practice Gandhi’s ideas. His belief that we should not just live for ourselves - we should live for others, help others, which will lead to universal uplift.  And the need to rise above materialistic pleasures. “Gandhi’s purpose in life was seeking the truth, reaching close to God by serving others. Unfortunately, today we are ruled by people who have no compassion. They just view it as a job to get ahead in life. Compassion and love was the core principle of Gandhi.”

“For the women from the self-help groups, the workshop is held once a month. We show them films on Gandhi, besides discussing Gandhian principles. They go back a little changed, a little enlightened.  And there is a course for the public at large. There we communicate in English and this paid course, which we have started this year, is slated to take place at least twice year. This year we have plans to hold one in New York.” says David. And what are the students saying?

Samson Selwyn, who was a part of the 2019 January batch, says, “Since it’s more of an interaction, the counter questions helped engage the mind. I had no knowledge about Gandhian economics - thanks to this workshop. I have found Gandhi was a man who had knowledge on varied range of topics - diet, consumerism and many more. He was constantly evolving and was a life-long learner. There were parts in the discussion where I did not agree and personally, I wish he had acknowledged the missionaries.”

“It felt so good to see people from the US also participating in the workshop. Gandhi was always experimental and I think we should have the inquisitiveness too. And his fighting spirit should be within all us,” says Reena Deepak, while Jayshree Venkataramani says, “For me we can’t just cherry-pick one or two of his writings. His entire life is a message.”

While spreading the words of Gandhi remains an integral part of the activities, the organisation also aims at creating a farmers’ organisation with a strength as equal as women’s self-help groups.

What is special in Gandhi farm?
David has already started laying a foundation for his long-term goal. He owns an entirely organic farm ‘Gandhi farm’ in Vadakavunchi, around 25 km from Kodaikanal lake. You go your way up the hill, you’re welcomed by Innuti (the adorable four-legged creature desperately wanting to be cuddled by visitors.

Sustaining on solar energy, the farm has carrots, beans, avarakai, chillis, bitter melons, peas, cardamom, garlic, custard apple, bananas, keerai, avocado and the mysterious passion fruit.  “We started this farm in 2014 and we have not cut down any old trees. Even 60-100 years old trees are here. We have a lot of visitors including deer and wild bears”, shares David adding how they have to be fenced out in order to save the crops.

Excluding the organic farm in Vadakuvanchi, David has 19 farms, close to ryot’s lands where an agricultural specialist will show the farmers the techniques of integrated farming.   “We call them entrepreneurial farmers. Mostly we get them to come and learn the techniques of integrated farming on our land. They cultivate on our land and then see the difference in strategies between ours and theirs,” David shares.

T. Anbalagan, an agricultural specialist, says, “They have not shifted to organic farming totally as they mainly look for more yields.  Here we are using bio-repellents. Neem oil, a formula that I have developed using green leaf, turmeric and vasambhu is used as repellent, apart from ‘traps’.  Materials we use also include pseudomonas( as bio-input against fungus), acetobacter, trichoderma (also known to increase plant growth and development). Generally farmers here tend to burn off the waste materials of agriculture, but our strategy is to collect the waste and make compost which has got multi-benefits.” The farmers are constantly encouraged and made to practise crop rotation.

So what are the plans ahead for meeting the ultimate goal - a FPO? Anbalagan shares, “Right now the focus is on seeds and production, pest management, fertiliser management (all in integrated methods) but we have plans to take care of everything - from seed to land preparation to selling. Most importantly, biological control remains one of the most important techniques here. Beneficial insects assist in cultivation. They just cannot be driven off.”

With their intervention, Anbalagan believes use of chemical fertilizers by ryots has come down, in the land where the farmers are being trained. “Earlier they would use 150 kg, now 30kg is all they use.”

And what do the entrepreneurial farmers have got to say. Pandiarajan, who is in the process of gradually giving up excessive use of chemical fertilisers, has only one concern. “I wish there were more rains. Then we would have achieved more yields.”