The Municipal House is one of the most famous Art Nouveau buildings in Prague, where the history of the Czech nation was written. (Photo: Rajan Goregaoker)

After soaking up all the architectural wonders of London, I was excited to be in Prague, the world’s capital of architecture. I voiced my apprehension about what could be in store for our holiday in Prague to my wife. Since on landing there I realised that Prague had been a part of the communist regime until very recently. Now that it had got its independence, I expected most of the architecture to be uniform and bland, similar to the residential apartment blocks which flanked either side of the road on my cab ride from the airport to my hotel. 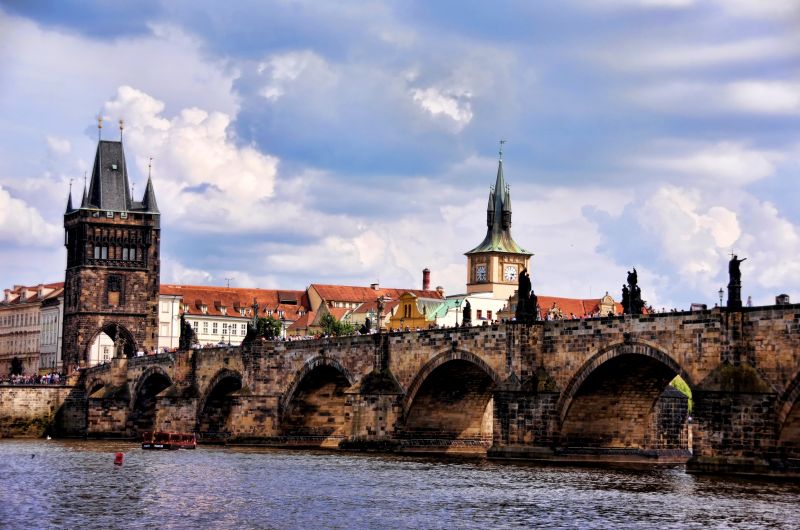 Charles Bridge, the oldest bridge in Prague and named after the Roman Emperor Charles IV, who resided in Prague. (Photo: Rajan Goregaoker)

But as we entered Prague proper and drove along the Vlatava river, my outlook towards the architecture changed as I began understanding and absorbing the feast to my eyes that surrounded me.  Prague, aptly named ‘The city of a hundred spires,’ is rich with architectural landmarks, for where else can you witness Romanesque, Gothic, Baroque, Art Nouveau, cubist, functionalist and communist era architecture in one go?

Prague was the favoured residence for quite a few Roman Emperors, most notably Charles IV – after whom the Charles Bridge has been named. In fact, Charles laid out the design of the city’s mid-13th-century ‘Nové Město’ or ‘New Town’ himself. The Czech capital is surely a paradise for history and design students, fans and experts.

Mostly spared from the wide-scale bombings of WWII, the city’s medieval centre has remained pretty much intact and eye-catching examples of baroque and renaissance architecture lie around every corner. The largest urban historical centre listed on the UNESCO World Heritage List, this well-preserved area covers 900 hectares that includes some 4,000 monuments. More contemporary and modern additions to the cityscape come from the country’s communist era. 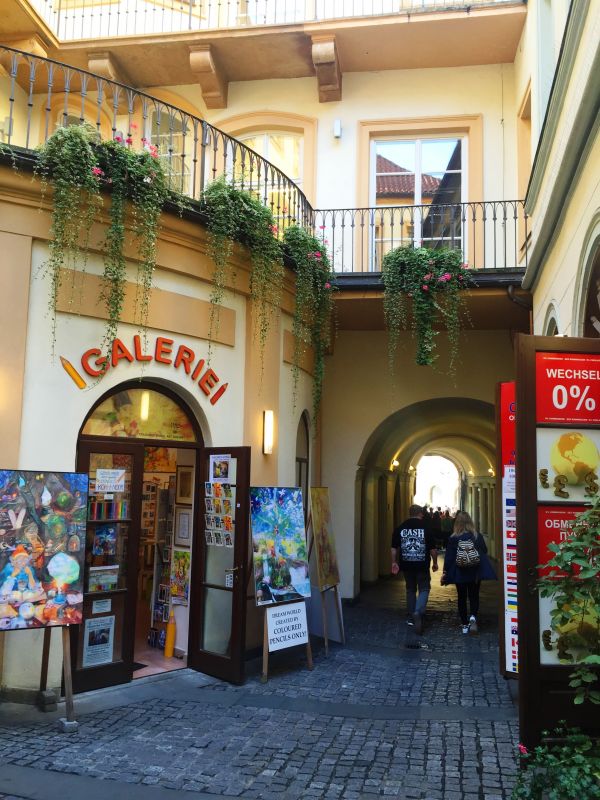 As we settled in our hotel very close to the old town square or ‘Mala Strana’, the view from our room was of the Vlatava river and Charles Bridge and beyond that the towering cathedral of St Vitus. Narrow, cobbled lanes with beautiful buildings in pastel colours of green and pink and beige and blue led to the old town square. The walk itself was so enriching that I could hardly wait to discover the rest of Prague!

The Old Town Square and the surrounding quarter form the heart of the city of Prague. This lively square is lined with magnificent buildings in different architectural styles, from Gothic to baroque. The whole square is bordered by a large number of colourful houses, palaces and churches.

The Old Town Hall houses the famous astronomical clock, the Týn Church, the Kinský Palace and the St Nicholas Church. This church is one of the most beautiful of all baroque churches in Prague and its interiors are especially impressive. The next day early morning we headed straight for the Prague castle. Prague castle is a castle complex from the 9th century and the official office of the President of the Czech Republic. The complex is full of historical buildings in a myriad of architectural styles which include Romanesque, Gothic, renaissance and baroque.

Romanesque architecture as the name suggests descends from the Roman Times. Romanesque structures are simple in their beauty and elegant in their symmetry. Wide massive walls, mighty towers, round arches and ornate colonnades are all characteristics of this style. The St George’s Basilica is located inside the sprawling Castle complex is a great example of this genre. The baroque, 17th-century red facade leads into a Romanesque stone interior with an impressive cross-vaulted ceiling and semi-circular arches. Being the second oldest church in Prague, it was built around 920 by Prince Vratislav. 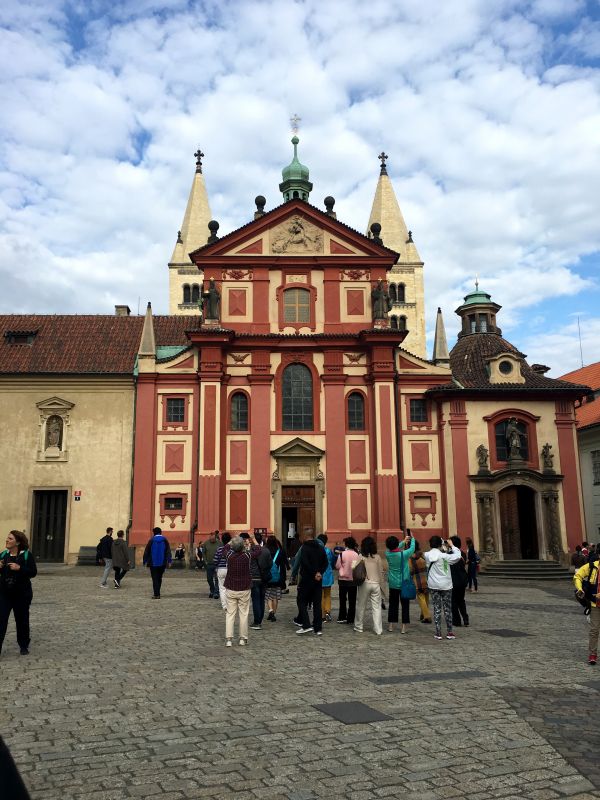 The Gothic style is believed to have originated in France in the 12th century, usually seen in grand churches and university buildings in places such as Oxford and Cambridge. Gothic architecture was made to install fear and awe in the worshipper. It was supposed to make sure the worshipper would feel insignificant and small in comparison to the power of the church and of Christ. Majority of the churches from about 18th century England are Gothic with massive widths and dizzying heights.

This ornate architectural style includes flying buttresses, pointed arches and ribbed vaulting, the engineering feats that enabled massive stained glass windows – one of the most recognisable elements in Gothic architecture. The St Vitus Cathedral, the most popular structure in Prague, belongs to the Gothic genre. You can see the magnificent St Vitus from nearly any elevated place in Prague.

The cathedral towers over Prague Castle and is the architectural trademark of the city. After you get over the magnificence of the cathedral from outside and you step in, you realise that history whispers from every corner of this monumental structure, taking visitors back in time. Quite a few bohemian kings and Roman Emperors have their tombs in this cathedral. 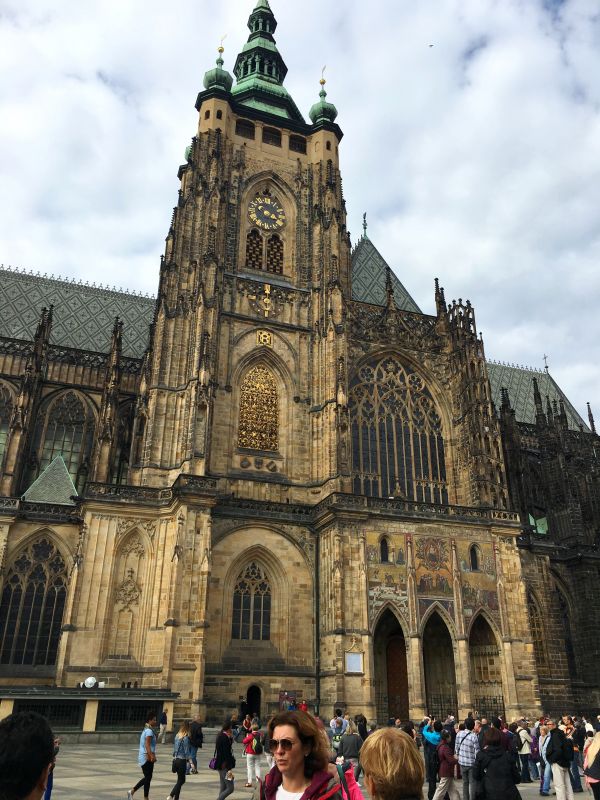 The Renaissance, celebrated the rebirth of art, beauty and culture. It prompted a rebirth in architecture too, a return to symmetry, proportion and geometry in columns, pilasters, domes and niches. Prague has only a handful of Renaissance buildings, however they are all quite worth your time due to their highly intriguing sgraffito-ornamented facades.

The Royal Summer Palace, located in the grounds of the Prague Castle complex, is one of the finest examples of Renaissance architecture outside of Italy. Often referred to as Queen Anne's Summer Palace, it was commissioned in 1538 by Ferdinand I for his wife Queen Anne. It is sad to note that Queen Anne never had the chance to enjoy an aristocratic garden experience as she died during the birth of her 15th child. 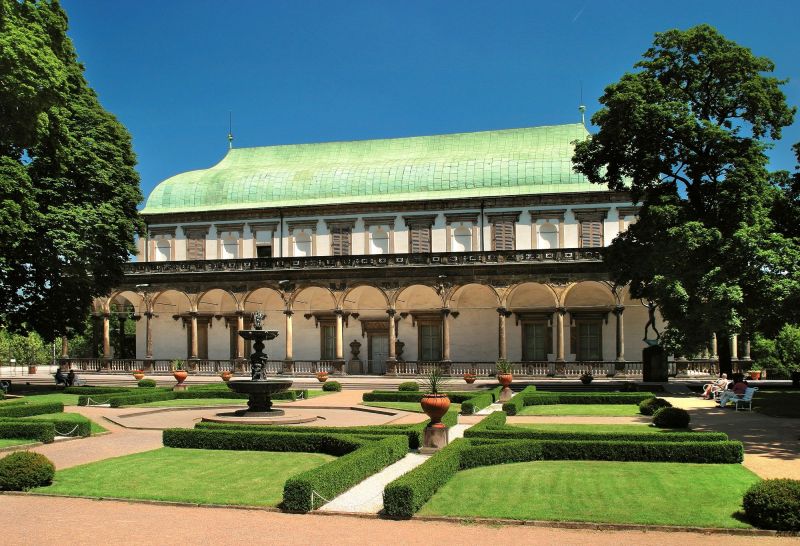 The Royal Summer Palace, commissioned in 1538 by Ferdinand I for his wife Queen Anne. (Photo: Rajan Goregaoker)

You can walk down from Prague Castle straight to the Lesser Town, where there is perhaps the largest concentration of baroque buildings in Prague. The Church of St Nicholas located here is the Baroque symbol of the entire capital. The dominant feature of the whole building is the Bell Tower, commanding a beautiful view of the historic core of the city.

In the interiors of the church, one discovers everything one would expect from ‘high Baroque’ – a magnificent play of light and shadow, illusive frescos, a lavish sculptural decoration and an almost 80 m-high dome with a lantern. Born in Italy in the early 17th century this highly decorative architectural style can be distinguished from other types due to its overabundance of gilded everything, especially putti or gilded figures made of wood, large-scale ceiling frescoes, tromp l'oeil paintings, florid sculpture, opulent use of colour and ornaments, and dramatic use of light.

This style is characterised most of all by lovely, rosy-cheeked maidens with intertwining flower and leaf motifs and new production methods that would seemingly try to dissolve the line between fine and applied arts. Of course, the Czech Republic is most popularly represented by its most famous Art Nouveau son, Alfons Mucha.

The Nationale Nederlanden building, known as the ‘Dancing House’ or sometimes ‘Fred and Ginger’, is one of the most significant landmarks in Prague and definitely the most internationally renowned piece of post-1989 Czech architecture. The story of the Dancing House dates back to the end of World War II, when the previous building standing on the site was destroyed during the bombing of Prague by the Allies.

During the communist era (1948 – 1989), nothing was built there and it was only after the ‘Velvet Revolution’ when Václav Havel came up with a vision. The frontispiece consists of two towers, resembling a dancing couple. On the top of the Dancing House, there is a dome, called ‘Medusa’ for its shape. The building has 9 floors and the rooms in it are asymmetrical. The house spills over the street line onto the pavement. 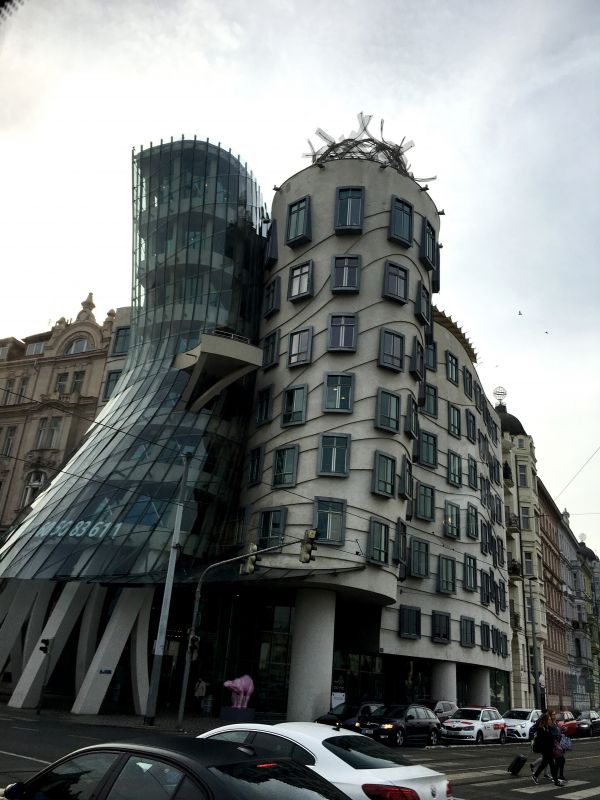 The ‘Dancing House’ or ‘Fred and Ginger’, one of the most significant landmarks in Prague and internationally renowned structures of the post-1989 Czech architecture. (Photo: Rajan Goregaoker)

Nowadays, the Dancing House is considered to be one of the most valuable postmodern buildings in Prague and an important part of the Czech capital’s architecture, but there were times when it sparked a lot of controversy. People in Prague had mixed opinions about this building. The cab driver, who was taking us around, seemed to still think of it as the ugliest building in Prague. It certainly does strike a sharp contrast against most of the buildings in its neighbourhood, belonging to the Art Nouveau genre.

The five days that we spent in Prague passed by so fast. Just when I was getting a little less light headed from all the architectural beauty around me, it was time to go home. Feeling insatiated, we hoped that touching the statue of St John of Nepomuk would ensure our return, as we were nowhere done absorbing the wonderful architecture that this city has to offer.

*Disclaimer: This article has been contributed by Rajan Goregaoker, Principal Architect and Director, GA design. The facts and opinions appearing in the article do not reflect the views of Deccan Chronicle and Deccan Chronicle does not assume any responsibility or liability for the same.

Amid coronavirus pandemic, Jammu and Kashmir's copperware witnesses a resurgence