Looking back at Amma’s journey

DECCAN CHRONICLE. | MERIN JAMES
Published Nov 30, 2017, 12:00 am IST
Updated Nov 30, 2017, 12:15 am IST
The book Jayalalithaa — a Journey gives an unbiased perspective on the former CM’s life and answers many questions surrounding her.

Ahead of her death anniversary on December 5, two definitive books on the former chief minister of Tamil Nadu Jayalalithaa, will be relaunched. Jayalalithaa — a Journey is a picture book on her life and times and Amma: Life and History is the Tamil version of the book in paperback. Sans the adulation and propaganda, these books bring to the people an unbiased perspective on a woman who is today a part of India’s contemporary history. These two books on Jayalalithaa look at the star-turned-politician’s life at a time of great social change and political churning. 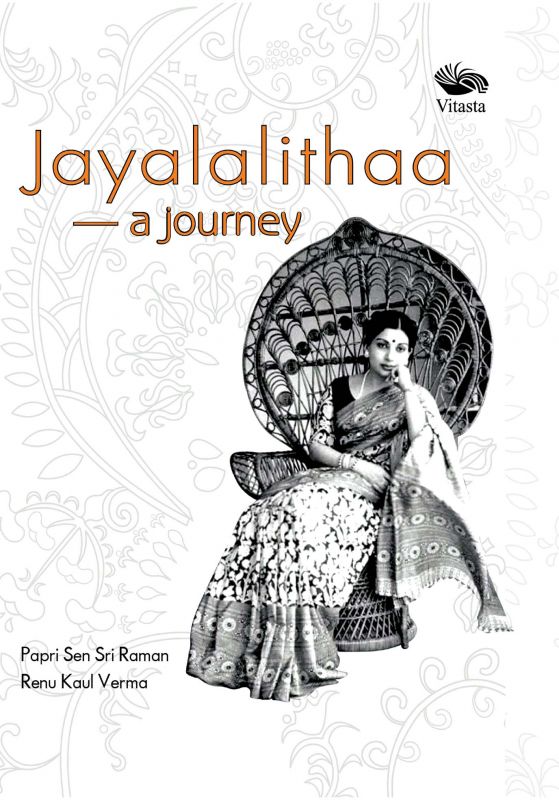 Cover of the coffee table book.

In a chat with DC, Papri Sen Sri Raman, one of the authors of the coffee table book Jayalalithaa — a Journey, talks about the book and the reason for publishing a pictorial tribute to JJ. “The book talks about the actor-politician Jayalalithaa’s life and times. There are several journeys encompassed in these 200-odd pages. It tells the reader about the journey of a family; of women aspiring to careers, the difficult journeys of women without husbands as the chaperoning factor during her period and still can be. The book describes a school girl’s growing up years, a journey by itself. It tells us about Kollywood’s own journey — the glitz and glamour which lurked the male demigods and their ambitions, rivalries and power struggles dishing out their munificence that drove her to hard work and tears,” she says, adding, “We have mentioned about Tamil Nadu’s political and social journeys along with the story of a star who became a superstar in the eyes of its people. Hidden in these pages is also an untold story, the journey of an idea into a book.”

Jayalalithaa went to jail twice. But the September 2014 judgement and sentence was very crucial. After her release, the re-election and the jubilation too were celebrated by the media. “I must admit that those eight months subconsciously impacted all of us keyed to national politics. ‘Wow! What a fighter!’ was the scroll running through our heads,” says the author.

It was on a hot sweltering May day, soon after the 2015 RK Nagar results were out that her friend Renu turned to Papri and said, ‘We must have a book on Jayalalithaa’. “A fellow journalist, Renu Kaul Verma is also my publisher. Well, naturally if any woman politician deserved a book, it had to be Jayalalithaa. I was about to tell her, a brilliant idea, but she looked at me and said, ‘why don’t you write it?’ In retrospect, maybe, we were naive,” smiles Papri.

Papri says that Renu threw this fairytale assignment at her — to translate her idea into a book. There were indeed many challenges for the writers. “There were several Tamil books on her. Then, there was Penguin’s 2011 book, against the publication of which Jayalalithaa had obtained a court stay. Of course, the book has now been published by another publisher.

“But discussing this idea in  May 2015 was a piece of burning coal for any publisher. Knowing this, a book on Jayalalithaa during her lifetime was a daunting idea! We had to get around courts and a hugely popular CM’s displeasure. At the same time, we could not deviate from the truth of her story. It couldn’t be an all-positive government publication!” reminisces Papri.
Collecting photographs was yet another challenge. “The popular image was a short, stout woman in a brown or green saree. But I knew that was not who she was. Photos of her younger days were stunning. The temptation to do a coffee table book was natural for us. There are beautiful picture books on Meena Kumari, Waheeda Rahman and other female leads — Jayalalithaa deserved no less.”

Papri has created the book in a semi-chronological format. Many photographs are already accessible on the net, but this book has rare photos, she says. “A picture of Jayalalithaa with her brother, for instance. One of the well-known Jayalalithaa photo collectors was Film News Anandan. I had once interviewed him in 2000 and I knew he had rare photographs. Because of the Penguin attempt, we decided to get the book seen by Jayalalithaa herself before publication. We, therefore, approached the Tamil Nadu government’s information department. We sought government’s archival pictures and data. I was very sure our story would not be the story of a star becoming a politician.”

The then Information Secretary, Dr R Rajaram also helped them to collect material, speak to people who knew Jayalalithaa before she came into politics, like the Parthasarathy brothers and actor Sachu.

“The most beautiful chapter, of course, is the one on her as a film star. The dummy was ready by May 2016 but she died before she could see it. Our attempt has been to place Jayalalithaa in context, I hope we have succeeded somewhat.”