“At first glance, there is not much in common between both our works, but as you delve deeper you will find some connections,” says artist Sweta Chandra. Talking about her husband’s influence on her work, she says, “I always got attracted towards working within the zone of my hallmark palette, containing a lot of sepia and smoky off-whites. Once Pawan convinced me to start my new work on a scarlet red base, I got introduced to the possibilities that can be built with brighter hues too.”

Her husband, artist Pawan Kumar says that he is also similarly influenced by his wife. “My assembled structures are inspired by Sweta’s work,” says Pawan, adding, “She frequently paints on a wooden base and that is how I got introduced and inspired to do the present series.”

His series of wooden assemblages and Sweta’s paintings are presently on display at IconArt Gallery in a show titled, Dissimulare. The irregular wooden pieces in Pawan’s works have been arranged together to create interesting animal, bird or human forms. The playfulness with which he accentuates their characteristics and softens the edges of the sharp wooden pieces with painted swipes and curves is noteworthy. The simplified and effervescent resemblance to reality and traces of abstract and creative distortion enhances the spirit of the structures and exemplifies the artist’s deeper understanding of form and space. 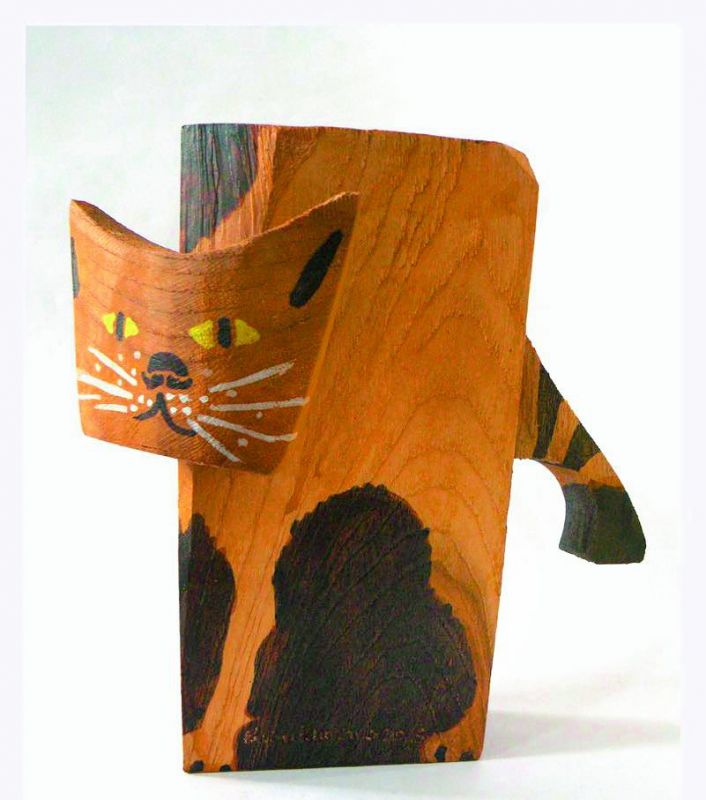 One of Pawan Kumar’s wooden sculptures on display.

“My studio is surrounded by a lot of carpentry shops and the constant exposure to leftover wooden blocks led me to create a few paperweights in a playful process,” shares Pawan. On the other hand, Sweta’s paintings are based on natural elements, the flora and fauna. Sweta adds, “To me, textures have always been inspiring and the triggering factor to initiate my work. I have been actively exploring canvas and vinyl board (wood) with acrylic medium. The process of painting contains a constant play of textures which emerge, diverge and create an illusion in space.”

Her compositions are refreshingly soothing, picturesque, fantastical and lyrical. They bring forth allegories from the bounties of nature that are rarely seen in and around the urban terrain. The intricately rendered and delicately juxtaposed birds and flowers are semi-realistic in their stance. Their entities are partially revealed and partially eroded, missing or erased. Perhaps Sweta’s visual vocabulary subsumes the subtle erosion that is continually taking place, eventually costing many kinds of plants and animals their lives.