Ranjona Banerji
The writer is a senior journalist who writes on media affairs, politics and social trends.

As Hawley lays out the structure of the book, he also discusses the idea of ‘shakti’, of the Goddess who is part of a God and yet separate, and the new manifestations of the Goddess seen across India today — not just Santoshi Ma but also Vaishno Devi .

Devi: The Goddesses of India is a re-edition in some manner of Divine Consort: Radha and the Goddesses of India, published in 1997 by the same editors. However, this is a new and wider look at the concept of a Goddess in Hinduism, with essays that look at the appearance of the “overarching Goddess” as well as local legends and new arrivals.

The importance of the “Goddess” has been increasingly discussed since the last century, with several theories about how patriarchal and patrilineal gods and religions replaced an older, more widespread (and perhaps more benevolent) “mother Goddess”.

The introduction to this edition, by John Stratten Hawley, starts with the rise of Santoshi Ma, from the 1975 Hindi film, to national worship. From here it is easy to transition to local goddesses and legends and the coalescence — or not — into the larger idea of “the Goddess”. Hawley discusses the symbols and rituals that are inherent to Devi and also sets the historical context for the Goddess in India firmly in Devi Mahatmya of the 6th century (CE), part of the Markandeya Purana.

As Hawley lays out the structure of the book, he also discusses the idea of “shakti’, of the Goddess who is part of a God and yet separate, and the new manifestations of the Goddess seen across India today — not just Santoshi Ma but also Vaishno Devi and Bharat Mata who has a VHP-built temple in Haridwar.

In the first chapter, James B. Coburn examines the “great Goddess” as a consort of a God but also as a manifestation when the gods cannot cope with a threat. Again and again, the Goddess appears on a battlefield to rid the world of some threat. She then becomes an entity in her own right, even if she emanated from a God. He examines the term “shakti” or power in its association with the Goddess. Coburn goes beyond Devi Mahatmya and later texts: “First, scholars are virtually unanimous in the opinion that the basic impulse behind the worship of the Goddess in India is of non-Aryan, non-Sanskritic origin. For all its brilliance in incorporating diverse Sanskrit motifs into its vision of Devi, the Devi Mahatmya, too, seems to support this view.” The first use of the word “candika” (from canda, impetuous) in the Devi Mahatmya, not seen in Sanskrit with regard to the Goddess before this, provides this vital clue. 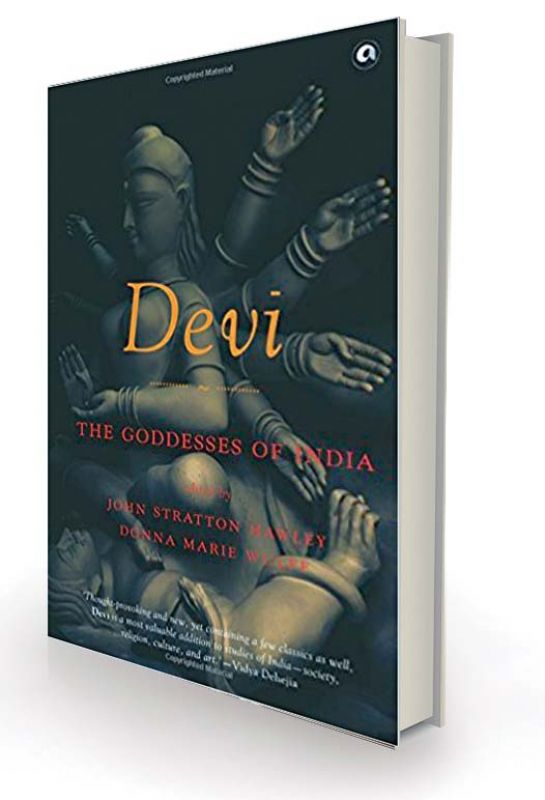 Devi is a compilation of essays by academics (Hawley rues the lack of religious studies at major Indian universities). The construct of the book is broken into two parts. The Goddess as Supreme and as Consort: from the Great Devi to Vindhyavasini to Kali to Sri to Radha. And the goddesses who Mother and Possess: From Ganga to Saranyu to Seranvali to Bhagavati to Sati to Bharat Mata.

There were two standout essays for me — On Sri or Lakshmi by Vasudha Narayanan and on Saranyu by Wendy Doniger. Narayan takes us deftly through the various myths around Sri, the interplay for dominance between her and Vishnu and the belief by many women that Sri is seen as subservient to Vishnu because she chooses to be seen thus. The stories around Sri in South India and the variations in local legend subsumed into a larger myth are fascinating. They point to the vast and fluid ideas which make up Hinduism, minus a rigid mould into which the religion is being forced today.

Doninger’s chapter on Saranyu and her shadow self or other of the same sort, Samjna — consorts of the Sun, daughter of Vishwakarma, mothers of Manu and Yama and Yamuna and the Ashwini twins — is darker and edgier. It speaks to the problems of gender, caste and race inherent in the mythology, in India’s history and present and in human history; of betrayal and rejection; of anger and resentment. Doniger contrasts the old texts, which contain the story of Saranyu from the Rig Veda onwards, with the anodised version told in the Amar Chitra Katha comics. Here, a myth is explained in the form of a human story, warts and all, devoid of saccharine and thus is even more real.

The epilogue on The Western Kali by Rachel Fell McDermott provides an interesting insight into the inherent misunderstanding by Western feminists as they appropriate her into their own ideology.

Local ideas of the Goddess are examined in the chapters on Vidhyavasini, Bhagavati, Sati and Seranvali. Bharat Mata speaks to new Hindutva icons overrunning our politics. The essay on Ganga by Diana L. Eck will be an eyeopener for those who see Hindus broken into clear sects. The familiarity of goddesses like Kali and Radha left one wanting more from those chapters.

Devi: The Goddesses of India is a valuable addition to any library, private or public, which prides itself on scholarship and better understanding of mythology, worship and Hinduism.

Ranjona Banerji is a senior journalist who writes on media affairs, politics and  social trends. She tweets at @ranjona