The art of billboard paintings must be utilised

The exhibition Sakshar’s panels were beautifully designed with bamboo mats from Manipur covering each panel.

When billboards were banned in a few urban areas or replaced by digitally recreated posters, it changed many things apart from the visual aesthetics of the skyline — for one it altered the face of the advertising industry since it made pan-Indian branding possible as billboards were being used essentially to advertise products or new releases of popular cinema. I, for one, heaved a sigh of relief as far cinema posters were concerned — Shah Rukh Khan at least looked like himself and it was not a game of pehchan kaun with a distinctly mofussil flavour!

Of course, the supreme all-time greats of billboard painters will remain M.F. Husain for all times to come before he became an artist with a global outreach. I met a few not-so- special artists too over the years and was amazed at the speed with which they needed to work to have the billboards up in time for the launch of the films. Their skill too was no mean feat — getting the mood, the likeness of the filmstars and the lettering perfectly in two hours flat of a vast surface area is commendable. Many of them have become copy artists and eke out petty livings now. Increasingly there is no work for them with the digital explosion having taken over most spheres like car number plates, name plates, shop boards and banners.

However aesthetic, personally I dislike billboards for I think they make the skyline of any place look ugly and I feel that they shouldn’t be used unless they serve as a medium of social change in areas where literacy rates are abysmal and the message needs to be shared pictorially. I have worked extensively with the government on the National Literacy Mission and can vouch for the medium’s efficacy coupled with posters and other wall paintings.

The exhibition Sakshar’s panels were beautifully designed with bamboo mats from Manipur covering each panel, in addition as design metaphors horizontal strips of Madhubani paintings with women’s empowerment as their leit motif at the bottom of each panel and a square black and white painting denoting a black board on the top with literacy symbols on it. Incidentally I had roped in artist Kanchan Chander for creating these black square paintings and a traditional Madhubani artist Sita Devi. On the centre part of the panel were mounted hand-painted posters which we eventually selected to make billboards. 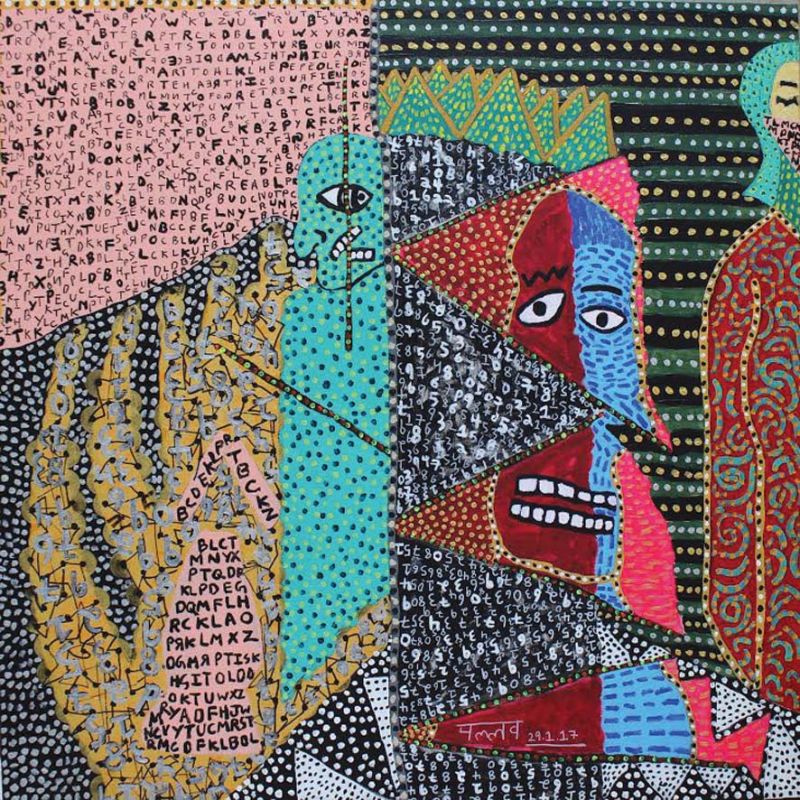 In addition as design metaphors horizontal strips of Madhubani paintings with women’s empowerment as their leit motif at the bottom of each panel and a square black and white painting denoting a black board on the top with literacy symbols on it.

These thoughts and memories came rolling in the backdrop of Oxford Bookstore’s discussion about the revival of the art of billboard paintings. The discussion had artist Sanjay Bhattacharya and gallerists Dolly Narang and Siddhartha Tagore as panelists who shared their experiences of the times when billboard paintings were a trend. Siddhartha spoke about a time in Kolkata where artists would paint whenever they saw an empty wall and how companies used to hire paid artists to create billboards. Dolly Narang shared a catalogue of her collection of hand-painted billboards made by Satyajit Ray for his movies in the 90s. Priti Paul launched an alphabetical book for children with a distinct Indian flavor titled ABC Desi at the event as her first step towards the revival of the art.

While there is still work for billboard artists in the rural and mofussil towns, some of these billboard artists should be used to improve the urban landscapes like ugly unending walls etc for they have the skill to change the aesthetics of the urban areas to great impact. But it needs to be under guidance and or consultations with curators or art consultants for it can aesthetically backfire badly if left to their devices. Painting on large scale is a specialised art and yet needs be done within a context.

One of the most promising youngsters of the contemporary art scene is undoubtedly Pallav Chander, BFA in painting from Birmingham City University, UK. He is holding a solo exhibition titled “Life must have its mysteries” with nearly 30 works, including large and small works on canvas and board. The body of works in this exhibition speaks a semi abstract language with spurts of aboriginal figures and objects that create a mysterious narrative. There are elements of personal mysteries that Pallav entwines in his works through a private gibberish language.

He plays around with the mind of the viewers, challenging them to form their own stories or messages. Layers of overlapping images are visible which the artist creates using textures to form interesting compositions. There is an underlying tone of drama, spontaneity, emotions and mystery using colours, textures and words. “My works are like a chapter of a personal diary”, says Pallav. Like a self portrait, the show explores the concept of love, numbers, dialect, subconscious imageries and a subjective observation of our contemporary society.

“In childhood, being diagnosed with dyslexia and dyscalculia, numbers and alphabets were never my best friends, yet I was always curious about both. I started exploring them from the very start of my art venture. With a background in theatre, I tend to treat my canvas as my stage and my stage as my canvas, so the dramatic element in my canvas is a must. Each piece I create is a continuation from the previous one I have completed. It’s a process that helps me as an artist to develop and continue learning the mysteries not only of life but also of art,” he says.

A walk down history’s avenues