Posing on a starry night: The artwork inspired by Van Gogh’s ‘Starry Night’ has artist Biswajit’s family too.

The Bahurupis are a group of artistes who perform a 150-year-old folk art form. The artistes usually don a variety of colour and roam from city to city in West Bengal, performing stories from the Ramayana and Mahabharata. No one knows much about their origins, but the one person who identifies with them most is artist Biswajit Roy, who has come up with his show — Memories Of Migration — at the Gallery Space in Hyderabad. 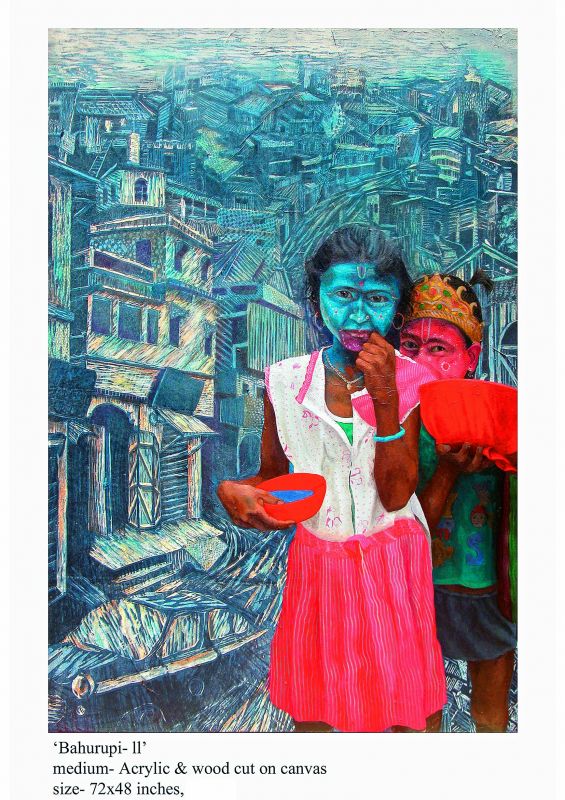 A painting of the Bahurupi artistes.

Roy’s family shifted from Bangladesh in the early ’70s, and since then have lived in a village in West Bengal. “From there, I moved to Kolkata and later, to Hyderabad to study at the University of Hyderabad. I’ve constantly been on the move. My roots belong to one country but the branches have spread out far and wide... a lot like the Bahurupis,” says Roy.

For someone who has carried special memories with him, it was just a matter of time before he spilled them onto the canvas. “My paintings are a mix of woodcut work on which I build my art. First, I carve out the image on a piece of wood, then translate it onto rice paper. Once that is done, I paste the rice paper onto the canvas and build my work on that,” he explains. 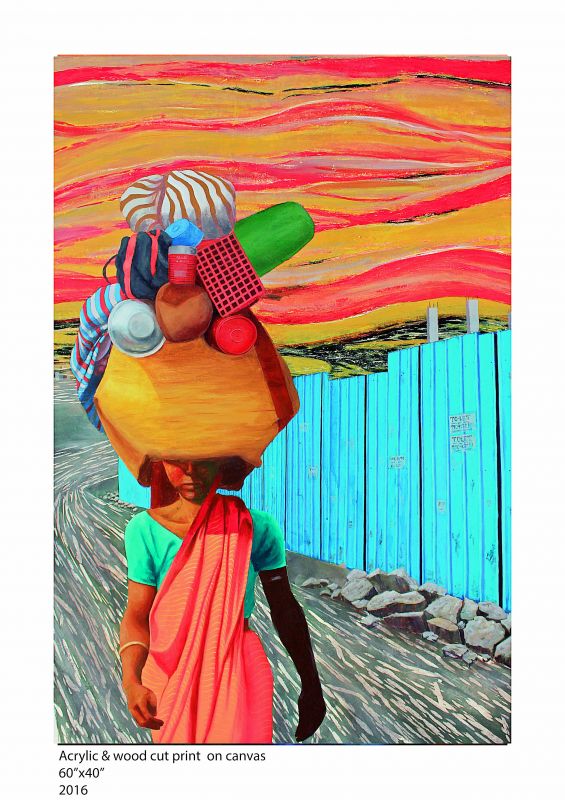 Art inspired by the skies of ‘Scream’

Woodcut takes a lot of time and developing that further just increases the process. “Depending on the size of the artwork, the time span can increase. One of my works, a 6x4 ft artwork that won me a solo show sponsorship last year, took me a month to finish,” says Roy.

While the artist does focus on migrants in his work, several works among the 29 on display showcase the Bahurupis. “Their lifestyle always fascinated me and their memory reminds me of home,” says Roy.

As you walk along the display, two paintings will definitely stop you in your tracks — one with Van Gogh’s ‘Starry Night’ in the background and the other with Edvard Munch’s ‘Scream’. “The first time I saw ‘Starry Nights’ it felt as if he had created the sky using woodcut and so I decided to recreate it. In the foreground, I painted the members of my family,” he explains.

The other painting, ‘Homeless’, inspired by ‘Scream’ is based on Hyderabad. He says, “Here, most of the buildings under construction sport a blue cover. So I painted a woman carrying her belongings in a bundle walking on the road, while the sky is a riot of colours and emotions, just like in the original paintings.”