A tale of travels

When Lekshmi Gopinathan began her travelling venture ‘Project Kalayatra’ in 2016, an initiative to help artisans living in India and neighbouring countries, she hardly imagined her travel experience would culminate in a book. A full-time traveller, she wanted to visit as many places as she could and make her co-travellers aware of the indigenous art forms of each place. The idea of the book struck her one day while she was going through the entries in her diary. “During the Kalayatra journey, I had a diary with me to jot down about places I visited and people I met there. One day while I was going through the diary, I realised it contains amazing, inspiring stories. I thought, ‘why not translate my thoughts into a book?’ That was the trigger,” recalls Lekshmi, whose debut book Karma’s Ukulele has just come out.

There is a story behind the title but Lekshmi leaves it to the reader to find out the reason from the book. “It is a fictional travelogue and is available on Kindle and Amazon (paperback). It is a self-published book. I had received offers from three publishing houses, but I went ahead with self-publishing as I couldn’t agree with their strategy. The book cover is designed by my friend Prerna Krishnamurthy,” she adds. Lekshmi, who is settled in Chennai, started writing Karma’s Ukulele last year in December. There was a small break as she had to participate in the Mrs India beauty contest. She resumed writing in January, finished the draft in May, and circulated it in her close circles. The response was good, which encouraged her to print the book. 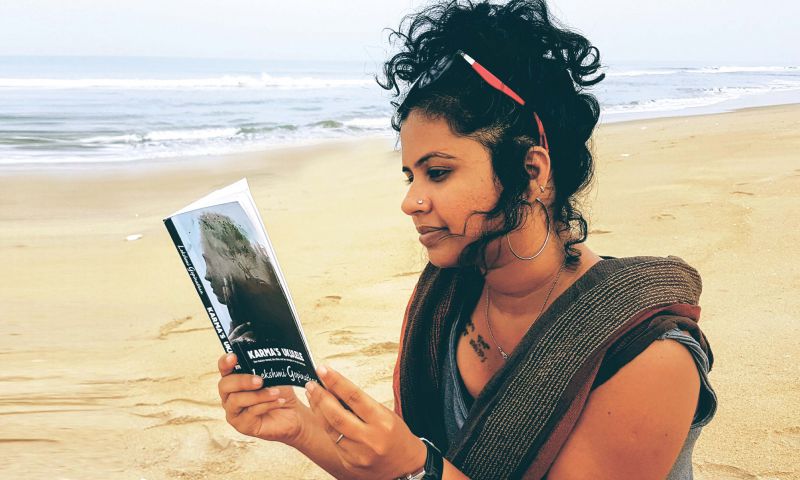 Lekshmi with her book

She has found online publishing to be a good option as it is her debut book. “There are quite a few characters. The protagonist is a woman who is travelling. She has gone through something painful in her life and sets out on a journey. She is strong and is an amalgamation of many the characters I have come across during my travels,” explains Lekshmi. Lekshmi has travelled to 33 cities in four countries as part of ‘Project Kalayatra’. All her experiences have found a place in the book. It was not difficult for Lekshmi to write the book as she had the necessary information in her diary. She just had to create characters and make them narrate her experience. “The book is like a diary and is a mix of reality and fiction. The whole story is narrated in the first person. The chapters are divided into years (from 2014 to 2017) and places,” says Lekshmi, who loves solo travelling. “It is easy. You are free to choose things according to your taste. Also, when you travel alone, you will be able to interact with a lot of people rather than in group travels. It is worth it,” she says.