Well-detailed hairdos play an important part in his sculptures.

To walk into an exhibition by Hyderabad-based sculptor G. Ravinder Reddy is to stroll into a forest of faces, all meeting your curious gaze with wide-open, penetrating eyes. Multi-hued, massive, Easter Island-like heads of women look back at you, all with inscrutable smiles curving their lips, bedecked with jewellery on their noses and heads and embedded in the layers of their fat braids and buns. Titled Rasa, the exhibition is Ravinder’s first in Kolkata. Held at Emami Art, the contemporary art gallery at the Kolkata Centre for Creativity, the exhibits allow viewers to walk around the sculptures and take them in from all sides, compelling them to pay as much attention to the intricately detailed rears of the sculptures as to their faces.

To view the sculptures, one needs to move through a space organised by the sculptures’ crisscrossing lines of sight, which is perfectly in keeping with Reddy’s vision of the interaction between art and its beholder, for he doesn’t believe in the ‘passive’ experience of art. “While looking at the sculptures, guests should also feel that the sculpture is responding and looking back at them. That’s how one gets engaged to it and gets a deeper sense of attachment to it,” the sculptor explains.

Evocative expressions
Some of the huge exhibits are everyday characters, such as ‘Portrait of a Migrant’, a 112.5” — tall blue — skinned woman with a load on her head; some are from mythology, such as the centrally situated trinity of Gauri (Edition 7), Lakshmi-2019 and Radha-III. The sizes vary, too: the bronze Gauri is 40” tall and 37” in diameter, while Radha is 87” tall. 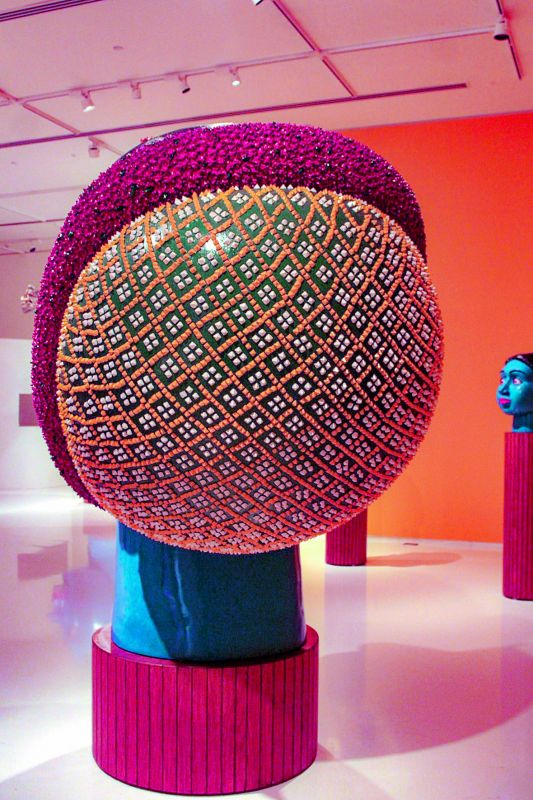 Well-detailed hairdos play an important part in his sculptures

Gauri demands attention but doesn’t overwhelm you. But Radha, with her heaped bun and layers of intricate floral wreaths, dwarfs you by her sheer presence. Similarly commanding are Shamla and Lovely, both unique pieces made in 2019. While Shamla’s grey skin makes her stand out, Lovely, whose skin glints blood-red under the gallery lights, is entrancing and frightening at once.

A harmony of colours and emotions
The emotions elicited by the pieces harmonise with the theme of the exhibition. The term Rasa refers to the idea of emotions or anubhuti, explains Ravinder. “The works exude different expressions and evoke different emotions,” he says. The artworks range are from a 30-year period, with the earliest, the relatively smaller ‘Terracotta Bust’, being from 1989, showing the evolution in Reddy’s style and expertise over the years. The materials used also range from bronze and terracotta to fibreglass, with gold-leaf gilding on many.

Curated by Anupa Mehta, the exhibition had its space customised by Anupa for the artworks. “Colour is an important part of his work, coming from a curatorial space, and if you saw his pieces against a white wall, the effect would never be the same,” she explains. So she chose to paint the walls that face each other yellow, and the one at the back, ruby-red, to offset what she calls the ‘vernacular’ and ‘rustic’ hues of the art. 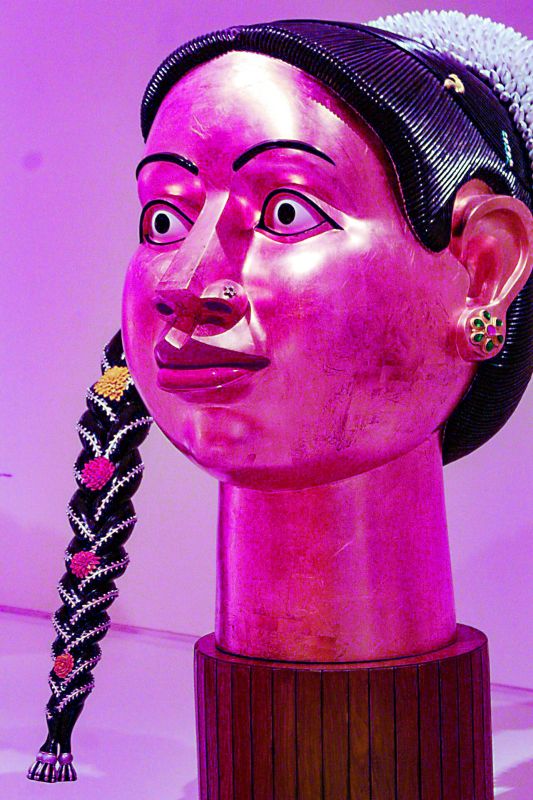 So, did the city of Kolkata influence the choices of sculptures made for the exhibition? “Some of the pieces were influenced by the fact that Kolkata is a city of idol-makers; I’ve also included Devi sculptures to reminisce Devi puja,” says Ravinder.

A world of women
It’s hard to miss the influence of women and goddesses in his work, including those from the Mesopotamian, Mayan, and West African cultures.

Richa Agarwal, CEO of Emami Art, and the executive director of Kolkata Centre for Creativity had consciously decided to avoid those. “I don’t know if Kolkata’s ready to see the nudes yet, having never seen his exhibition before,” she explains. But the city has taken well to the artist; many of the artworks have already been sold, with prices ranging from Rs 35 lakh to Rs 2.5 crore.

Incidentally, Rasa has been Richa’s dream-come-true too. “I’ve been talking to Ravinderji for the last three years, and agreed to do a large-format show in the city. That’s how Rasa happened,” she says.

Waiting for more
As one walks out of the exhibition, one sees a film of the sculptor discussing his works, interspersed with shots of him working on some of the sculptures on display. Age has not slowed him down, but he says his body will not co-operate anymore. After all, the process of creating each sculpture is laborious, from creating the initial clay design, to using Plaster of Paris to mould it, and even creating the inner structure of pipes and threads. But Ravinder is already planning ahead, deciding to work on small-scale sculptures more for his own satisfaction, moulding in iconic features in them.