Ajay Kamalakaran was born in India, educated in the US, and “made” in Russia, in fact, in a very remote part of Eastern Russia that even the Russians don’t know much about! This is the island of Sakhalin where he spent several years, and the experiences and memories of which he has brought out in a book Globetrotting for Love and Other Stories, from Sakhalin Island.

The book was launched in Bangkok recently, as also in several cities in India (Mumbai, Chennai, Kolkata, Bhopal, Bangalore). The slim book consists of highly readable tales about the multi-national community who lived in this unique, oil-rich island, including many Indians.

The Russian Ambassador to Thailand HE Kiril Barsky arranged an “Intellectual Tea Meeting” in Bangkok, to meet the lively Indian writer, who regaled his audience with exciting tales about a little-known Russian island.

Excerpts from an interview:

On Mumbai:
My roots are in Palakkad, Kerala, and I love going there. But I am totally a Mumbai boy! Mumbai is the city where people from all over the country come together and are comfortable with each other. The rest of India should be more like Mumbai! It is the real India, with its beauty and its ugliness. Mumbai has Bollywood and it also has Dharavi (slums), and both are important to the city. I was born in Mumbai, did my Master’s degree in banking, and always keep going back there.

On New York:
I did most of my schooling in the American megapolis, since my father worked as a banker there. I have some “American” qualities— I’m go-getter, I take responsibility for my life, and I still have an American accent! 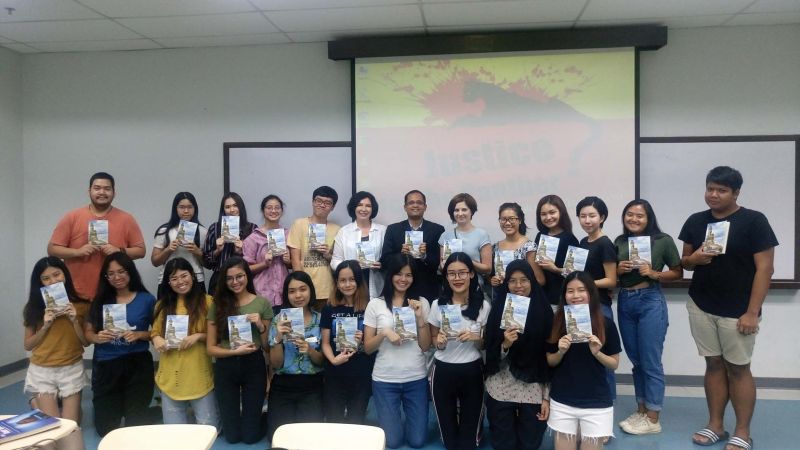 On Sakhalin:
I was always fascinated with the “undiscovered” parts of the world. And when I enrolled to study Russian at the Russian Cultural Centre in Mumbai, I heard about Sakhalin. The next thing I knew was I was in a flight to Sakhalin (in 2003), and enrolled at the Sakhalin State University, for a Russian language course. When they started an English-language newspaper, the Sakhalin Times, I became its Editor, and worked there for four years.

On Sakhalin’s location:
Sakhalin’s capital city, Yuzhno-Sakhalinsk is almost nine hours by flight from Moscow, so, the Communist or European influences were not so strong there. In fact, Japan, Korea, China are much closer to Sakhalin than Moscow or St. Petersburg! There are strong Korean and Japanese influences there, even today. That’s why it’s one of the most multi-cultural parts of Russia. Sakhalin is a long island, which spans almost 950 kms, from north to south!

On his amazing travels around Russia:
One of my greatest adventures was travelling by surface transport, from one end of Russia to the other. It was a 45-day journey with two close friends — From Sakhalin all the way to St. Petersburg. It was not easy, as we had no cell phones or google maps, then. From Sakhalin, we went to Khabarovsk, Siberia, Irkutsk (known as the “Paris of Siberia”) Lake Baikal, Novosibirsk, and then, Moscow, St Petersburg. It was one of the greatest adventures of my life!

On Bengaluru:
I left Sakhalin in 2007, and worked in Bengaluru with Reuters, as a business reporter, where I wrote on bankruptcy cases, mergers and take-overs, for two years. Then I freelanced for various international publications, including Die Presse of Austria, and travelled around the country to do interviews. I met many interesting individuals, including Congress MP Shashi Tharoor, with his impeccable communicative skills. From 2011 to 2017, I was the Asian consulting editor for a unique Moscow-based publication Russia Beyond the Headlines which kept my connection with Russia alive.

On Sakhalin today-
I went back to Sakhalin in 2013 and found a tremendous transformation there. It had world-class infrastructure and facilities, largely due to the oil and gas projects there.

The two major changes that impressed me were the visible reduction in alcoholism, and vast improvement in public health. Among the many Asian communities there, were Indians, due to the ONGC project there. There were multi-cuisine restaurants, including Indian ones. That’s why tourism boomed in Sakhalin, especially as there were many flights to the island (including many chartered ones) from Seoul, Hong Kong and Sapporo in Japan. The beautiful city of Vladivostok, known as the San Francisco of Russia, is only an hour and 20 mins away!

On the uniqueness of Sakhalin:
What is great about Sakhalin? Its marvelous landscapes, both in summer and winter. The island has four beautiful seasons, and is studded with mountains, seas, lagoons. It also has 16,000 lakes! For the outdoors person, there’s plenty to do skeeing, ice fishing, snowboarding, whale watching. There are historical churches, museums, many cultural programs like music concerts, puppet shows, theatre productions, even an exciting film festival!

On the Russian people:
In my opinion, the Russians are among the friendliest in the world, and hospitality is a very important part of their culture. They have a soft spot for Indians, and I always felt very welcome there. I was asked to jump queues, even at airport security in smaller Russian cities, because I was a visible Indian! Indian expats tend to play the “race-card” when they are abroad, and claim they feel discriminated against. But I never ever felt this, in all my years in Russia.

On why he wrote the book:
I wanted to document my experiences on the island, which was going through its most interesting phase when I lived there. I was both a local and an expat, as I could speak Russian and so, was integrated into the local community. But since I spoke other European languages, I could merge with the expats as well. In many ways, Sakhalin was a microcosm of the world, but the world did not know it. My book has been released in India, Sri Lanka, Thailand, Russia, Ukraine. It’s also on sale in the US, UK, Canada, Japan and Australia.

On his present plans:
I’m writing a novella that is set in Moscow. I also want to have a base in Sri Lanka, which is culturally close to Kerala and has also preserved many Indian traditions. It would be great to spend the summer in Russia and the winter in Sri Lanka, with many trips in between, to India and Thailand!

On what is “Home” to him:
“Home” is where you feel good, and I feel good in so many countries! But India is definitely the place I love the most. The greatest thing about being Indian is that you find connections with every part of the world, which is why I feel at home everywhere. There are so many Russians who speak Hindi. The streets of Thailand have so many Hindu images. So many Indian traditions are kept alive in Sri Lanka. It’s great to be a migratory bird, and fly from one country to the other.

The writer is a critic and commentator on films and culture based in Bangkok, Thailand