A Master of all the Arts

Artist Thota Vaikuntam standing with some of his earliest works from the 1970s, that were heavily inspired by music.

Today, Thota Vaikuntam might be a famous artist with his work sold all over the world, but he was once a boy from a small village in Telangana who set out to the city, believing that art was his calling.

Five decades, and several highs and lows later, Vaikuntam is sitting in an art gallery, filled with his works. And just like the name of the show Bhaavanaatharangam, he too feels a wave of emotions hitting him.

Vaikuntam, the musician
His repertoire has certainly changed as an artist — the now famous works of Telangana women weren’t even conceived in the early ’70s. “This was during the phase when I was into music,” he says as he points out to a set of works that have artists playing the violin among other instruments. “I used to hang out with a lot of musicians, sometimes I would spend nights with them and eventually ended up drawing them.”

Back when Vaikuntam was studying Fine Arts from the College of Fine Arts and Architecture, Hyderabad, he would walk down to the nearby College of Music. “I was confused about the instrument, but wanted to play something small and so I was handed a violin. That is one of the toughest instruments to master,” he says with a laugh.

Vaikuntam’s tryst with the violin lasted for exactly six months. “I really loved music but didn’t have the time to practise. Drawing took up a lot of my time and sadly, I had to give up the violin,” he says, admitting, “I have never played the violin after that, but sometimes I play the banjo at home, just for fun.”

Art was not easy
Today, Vaikuntam has created several thousand artworks. But there was a time when he couldn’t get himself to draw a tree right. “I struggled a lot,” he says.

“Sometimes, the tree top would be huge or the stump would be small... I just couldn’t get it right. But I kept practising and that’s how I got over the initial struggle,” he says.

Before the Telangana series started, Vaikuntam focussed on the people he saw every day in the city. “Sadly, I do not have those works. I didn’t have a roof over my head and so I would ask friends to keep my works with them and they were lost,” he says. 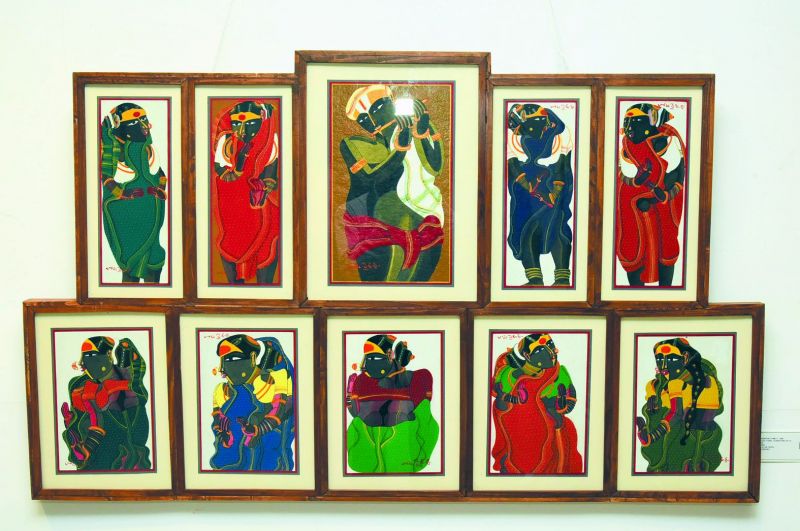 Breathtaking work: One of artist Thota Vaikuntam’s art work from the panel series

My wife brought stability
Vaikuntam was like a yogi lost in the magic of his art, but his wife, Sugunamma was the anchor that kept him sane. “I couldn’t get away from art. There was hardly any money in it back then, but it kept me happy, and my wife knew it,” he says.

Vaikuntam stayed in a very modest home in Hyderabad. “It was a single bedroom home where we stayed with our three kids,” he reminisces. Suguna made sure that all of Vaikuntam’s works were safe. “I never kept my work in one place... But she would set all the works right and make space for them.”

He suddenly gets serious when he says, “My wife was there with me right from the time I never had money. She stood by me through all those years. There were times when there was no money at home and nothing to eat, but she never asked me to do some other work to make money. She made ends meet and single-handedly brought up the kids. If it wasn’t for her, my life would not have been whatever it is today.”

The panels that changed life
Every phase in Vaikuntam’s life has been marked by different works, but his paneled artworks pushed him further into the limelight. “I have Laxma Goud to thank for bringing about a new wave of change in my life. In the ’90s in Bhopal, an exhibition was held once in two years,” he explains.

Laxma was one of the commissioners for the show and was in charge of getting works from down South. “One day, I got a letter from him saying that he would like to see my works. When he saw them, he came up with the idea of getting them framed into panels,” adds Vaikuntam. From then on, there was no looking back for the master.

Art director for films
Vaikuntam seems to have touched almost all kinds of art. He has even worked in films (one of which won the National Award) as an art director.

Recalling his stint, he says, “That stint helped me a lot. I started noticing people, the way they lived and how their lives were made. Films back then weren’t like what they are now. We had to recreate simple village sets and I began taking notice of the simple people from villages, their mannerisms and what set them apart.”

Artists Surya Prakash and Laxman Aelay, who lent some of Vaikuntam’s work from their collections for the show, talk about him.

"I simply love Vaikuntam’s work. He was my junior at college and I have been following his work ever since. His art is very unique and I have collected them over the years. I will never part with these works. He is one artist who has stayed true to his roots and has brought them on the canvas very beautifully," says artist Surya Prakash.

"Vaikuntam sir is my inspiration. His work was what pushed me to do better. I remember there was a time when I came up with a calendar with my works on it and he wrote a note for me, I treasure that till date. I was a struggling artist when I saw his works being sold by a collector. That was when I picked up his pieces," says artist Laxman Aelay.

"It was a lot of effort to put the entire show together. But it was absolutely worth it. It turned out to be much better after it went on display. I think this has been the toughest show for me and also the most satisfying one. I hope I get more chances to work on such shows", says Manvinder Dawer, owner of India Fine Art.