Raavan is seen as a villain, I depict him differently: Amish Tripathi

Amish’s Ram Chandra series is the second fastest selling book series in the Indian publishing history, right after his ‘Shiva Trilogy’ series which still continues to occupy the first position.  When DC asks him if it is the spotlight or the writing phase that he enjoys the most, the author with an infectious smile on his face quickly reverts, “It’s always the writing- there I get to do what I enjoy the most.”

Writing can never be restricted to a particular genre. There are a lot of subjects that a writer can open himself to, but knowledge in that particular area is always a prerequisite. 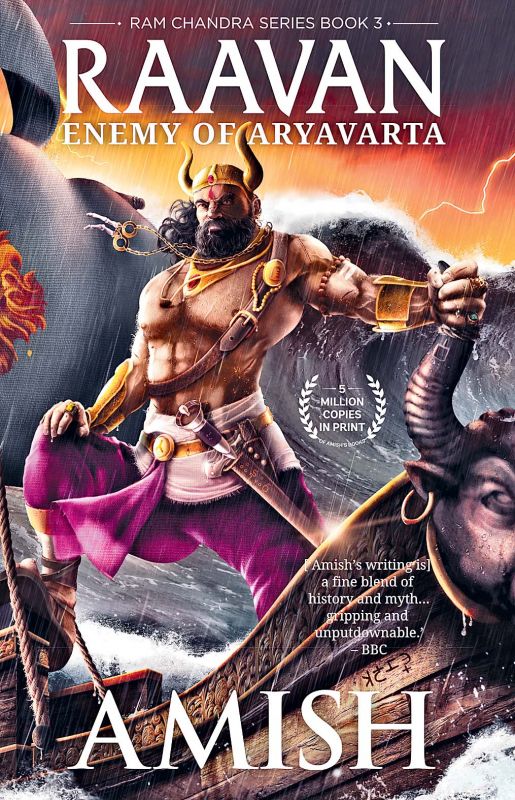 Amish has a piece of advice for aspiring writers who are trying to figure out which genre to pick up. “There are plenty of options that come under the umbrella of fiction and non-fiction. Under fiction, you can take up crime, history or romance. In non-fiction you have science, sociology or, politics”, he suggests. “You should take up a genre where you have knowledge, something that interests you. I always say that in order to be a writer, you first need to be a good reader and all of us have our favourite genres as readers. Naturally, the books that we write will emerge from a genre in which we have knowledge.”

With reference to the increasing need and demand for feminist writing  in today’s society and the struggle and torment today’s woman goes through in life, Amish asserts, “There is no doubt that there is a social problem in many parts of the world on how women are treated, and we should address these issues. Our ancient culture was quite respectful towards women’s rights. Our Indian ancient scripture says that God abandons the land where women are not respected. I believe there is an opportunity to revive our ancient culture which was very respectful towards women’s rights, sadly something we have forgotten today. I strongly believe that an individual or a society cannot prosper or meet their aspirations if half of the society is oppressed. How will that work?”

“Not just Chennai, I have a connection with Tamil Nadu since a very tender age”, he quips. “I did my schooling at the Lawrence School in Ooty till 6th standard and for that I had to travel to Coimbatore and it was around then I visited Chennai a few times. I love this city with its art and culture.”

Amish says his life’s journey has gifted him with some ‘forever’ friends from here which he is eternally grateful for. “My publisher Gautam Padmanabhan is a very dear friend. Viswanathan Anand, his wife Aruna, director Santosh Sivan are all close friends.”

Veering the conversation towards serious issues that has constantly been plaguing writers and eating into their freedom today, Amish points out, “If you read the Natyashashtra, our main ancient text on performing art  in India, the first chapter is a tribute to freedom of expression and that is the way our original culture was. We have forgotten a lot of that because we do not teach our ancient culture in our education system. Freedom of expression is an Indian value; it’s not a westernised input.”

Segueing to the topic of Raavan and his book, Amish gives his perspective on him. The first two books talk about Ram’s childhood along with the politics surrounding his ascension to the throne. It also shows  Lady Sita’s journey from an adopted child to the prime minister and then finding her true calling - a warrior and a Goddess.  In his third book, Amish traces Raavan’s journey from being an artist to an intellectual to the greatest villain ever. This part shows how Raavan becomes the king of Lanka and how his destiny intersects with that of Lord Ram and Lady Sita.

“Raavan, in popular imagination today, is seen as a pure villain, but my book is a relatively modern interpretation. In ancient times, there was a nuanced take on him including in the original Valmiki Ramayana. My book is closer to the ancient version of the Ramayana where not just his negatives but his positives have been shown as well.”

So does the author, who has crafted Raavan’s character from an unknown perspective for the world to know the other side of him, identify with the character?

“No, I don’t identify with Raavan. It’s not a question of whether I identify with him or not. It’s about learning from him too.  Yes, there is a lot that we can learn from Raavan. In fact there is a popular folk tale in North India where a dying Raavan is lying on the battlefield and Lord Ram is telling Lord Laxman that Ravan may be their enemy but he is a scholar. Therefore Lord Laxman should learn from him. Lord Ram is always shown as a symbol of grace and dignity and known for the way he would treat even an enemy. When Lord Ram himself says that there is something to learn from Raavan, ordinary people can also look at this aspect and learn from him”.

As the conversation draws to a close, Amish feels strongly about India’s stand on the international map in terms of literature. “There was a time when India was a world leader in most fields, including literature, but then we had a few bad centuries. As we revive economically and become more powerful, our literary influence will also increase,” believes Amish.