Subhash Gupta along with the team of Kissago

True to its name Kissago’s latest production Ilhaam, is about a man who figures out the meaning or the worthlessness of life, depending upon how you see it. Layered with life’s philosophy and deep-rooted insecurities of humanity, the playwright Manav Kaul has tried to imagine what it would be like to connect with the almighty at a personal level. Subhash Gupta, a veteran on stage and the director of the play, has fallen in love with the script so much that he reckons there will be shows of this play for at least the next few years.

Incidentally, similar is the story of the team behind this production as well, especially Subhash’s. Subhash has been on stage for the last three decades. He has shared the stage with some of the biggest names in Indian theatre like Om Puri, Pankaj Kapoor, Sai Paranjpye and many more. But when he moved to Hyderabad in 2004, he hit a brick wall. The ex-banker found himself in a new city without any friends or access to stage. As fate would have it, this year, he met the team of Kissago and the team grabbed and held on tight to the chance of learning from his wealth of experience. 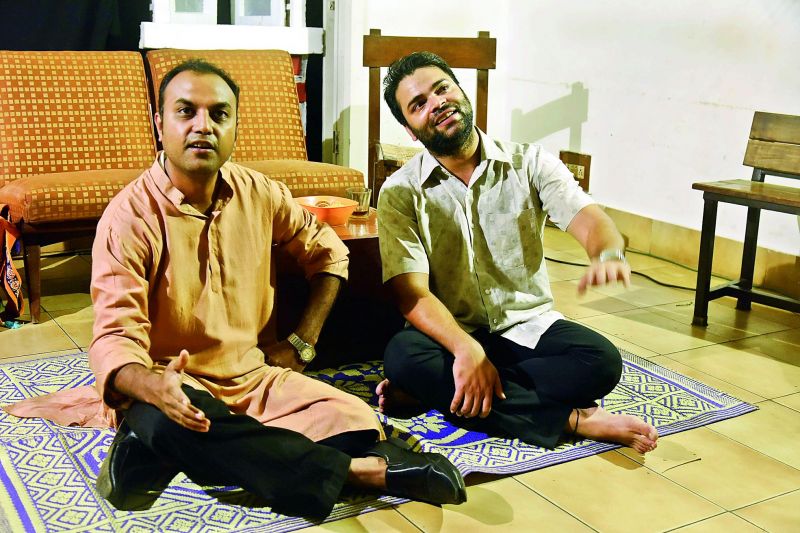 A still from the play Ilhaam

In his own words, the entire team is like his children and his heart brims with pride when he sees them grow as actors. He considers Jay Jha, one of the actors of Kissago, as his protégé. If one would have seen Jay on stage five years back, he would have been written off as an actor, but today he is the pride of many wonderful productions. “After I joined, the versatility he brought in his acting is something I am very proud of. He has done such a wide range of characters, and so convincingly that it makes me very confident of the future of theatre in the city.”

The story of Subhash, who is in his 70s and Jay, who is in his 20s, when juxtaposed, seems like the same story in a time warp. Both of them have a deep rooted love for the stage, both of them had many obstacles to overcome and for both of them, their commitment trumps everything else. They share multiple relationships with each other, all wrapped into one big spectacle called theatre. They are friends, they are a teacher and student, they are a father and son and they are colleagues on stage. Such love and camaraderie is what translates into some breathtaking performances on stage. With the treasure chest full of plays from the last five decades and an army of actors, Subhash puts it the best when he talks about his journey as, “it has just begun, abhi to bohot kaam baaki hai.”