Maxwell Tilse and his creation

“I’ve always loved to draw,” is how artist, traveller and self-proclaimed cat lover Maxwell Tilse from London likes defining himself. An artist whose greatest passions are ‘art and travel,’ 24-year-old Maxwell’s passion-turned-profession has turned him into an internet sensation.

“As a little kid I would constantly draw little scenes and comics. Big battles and adventures, inspired by films I would watch or books I would read. I never dreamed that it could become a profession.” 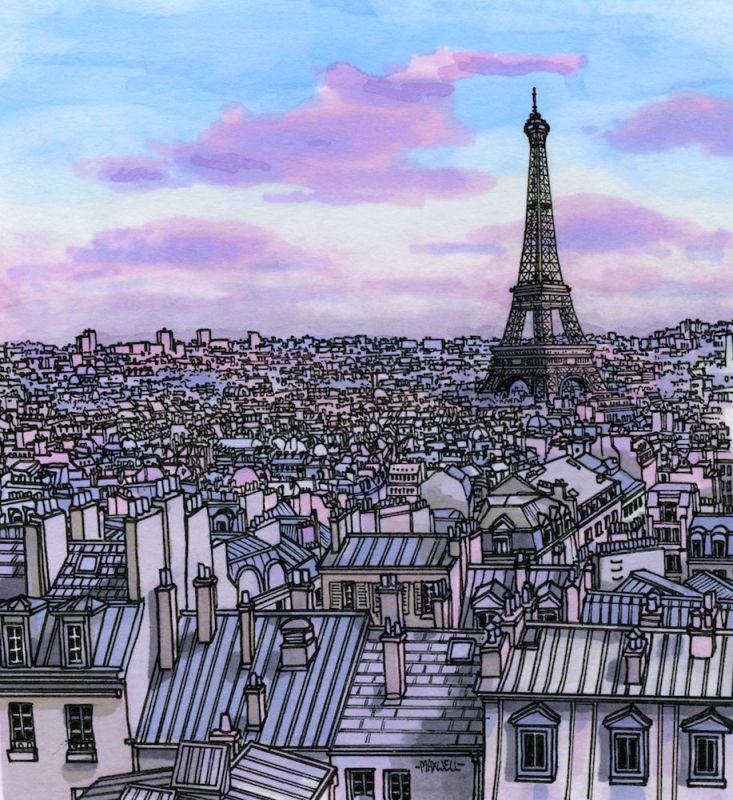 Paris, France. The artist tends to lay down the base colours and sky first. Then build the city on top of that. (Illustration by Maxwell Tilse)

It turns out that art was perhaps not the occupation he had initially chosen for himself. In fact after finishing high school, Maxwell went on to study Law at University, but life had other plans for him.

“I got disillusioned,” he says, before adding, “I wished to travel instead. And with art I can have a job that does not ever feel like work. I can work when I want and where I want.” 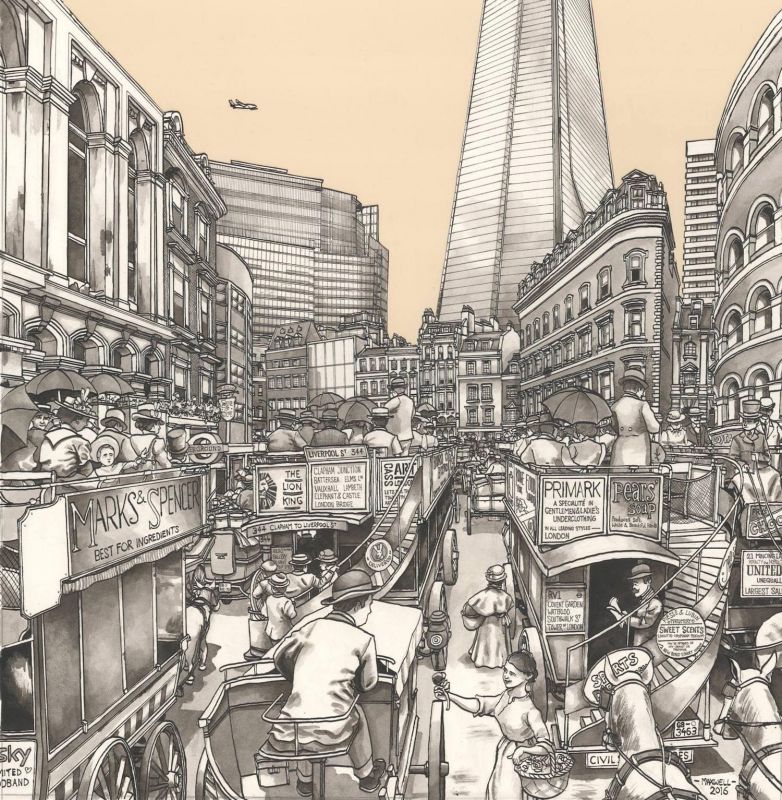 The works of Maxwell are seemingly simple and carefree. They have a jovial tone to them, accentuated by bold nib strokes and clean colours, almost akin to the aesthetics of the old style comic books. 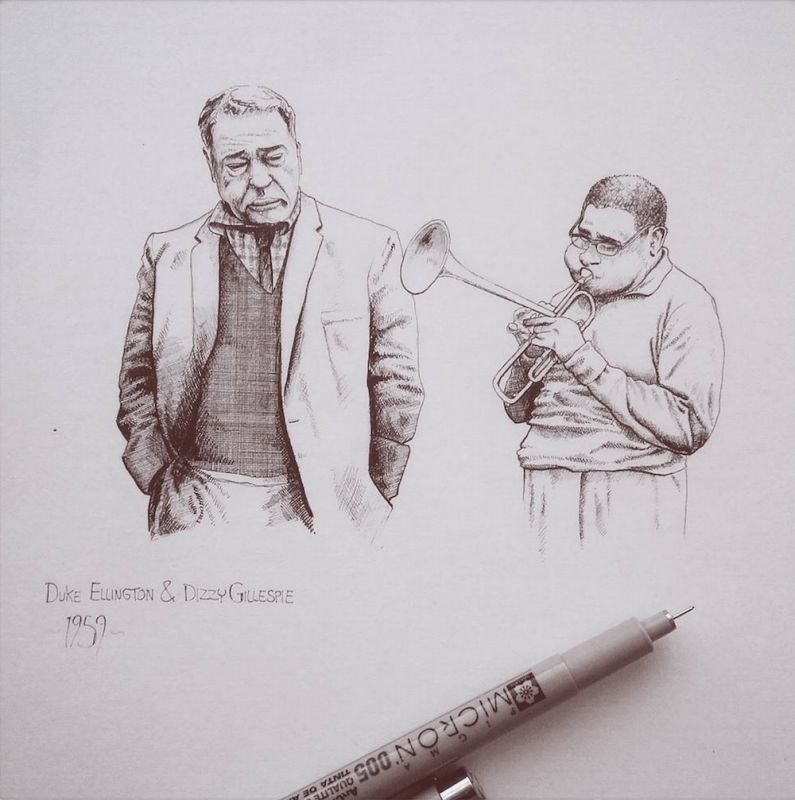 Duke Ellington & Dizzy Gillespie, 2015 In February 1959, Duke Ellington assembled an amazing line up of top Jazz musicians for the swinging “Jazz Party” album. Dizzy being one of them. In 1960 they both collaborated and released ‘A Portrait of Duke Ellington’. (Illustration by Maxwell Tilse)

Maxwell verifies, “I certainly have a comic cartoony style. My greatest inspirations have always been the old French/Belgian style comic artists like Hergé or Albert Uderzo. I like my art to not be an exact representation of a place. It is important to add one's own style to their art.” 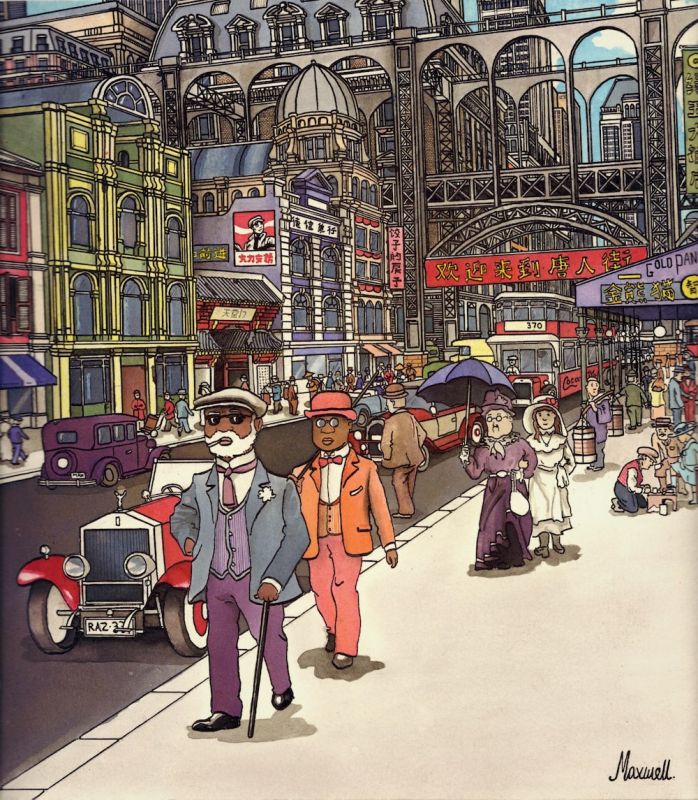 Gold Panda Dandy, 2012 Indian Ink & Photo Retouch Dyes The gold panda dandy, strolling through Chinatown. This drawing took inspiration from a variety of places. Primarily from walking through Singapore’s Chinatown. But also from the big cities of New York and Chicago. (Illustration by Maxwell Tilse)

Elaborating further on his preferred medium, he says, “I work with ink and nib because I love the richness of the ink. It's very time consuming, but there's really no equal.”

Maxwell recounts more about his decision to pursue art full time. “I left my university in Sydney in 2013. I was studying Law at UTS, which I still very much enjoyed. But I knew that law wasn't my passion. I would draw constantly in lectures. I desired to travel the world.” 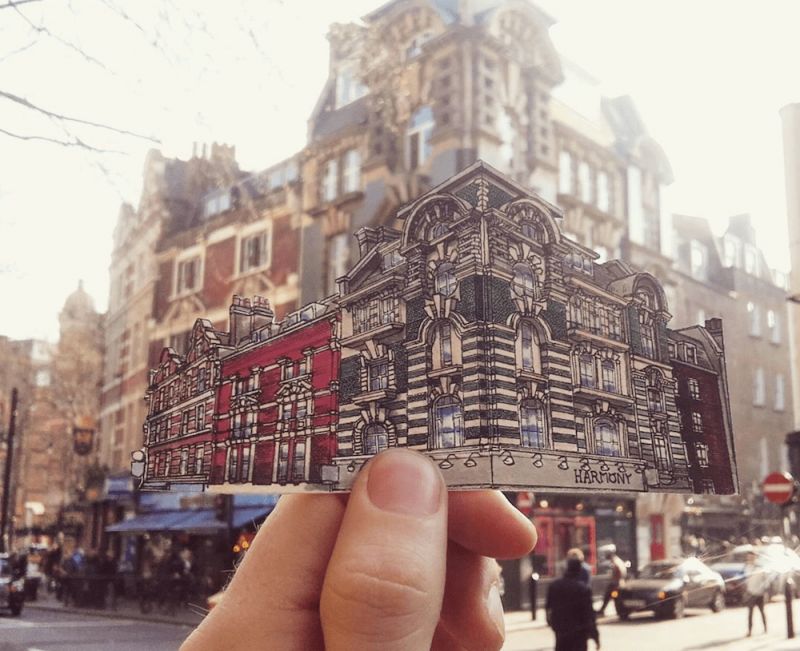 99 Charing Cross Road on the east end of Old Compton Street, Soho. The neo-Baroque style building, with its unusual green glazed brick and yellow sandstone, was built in 1907. Old Compton Street on the other hand has been around since the 1680s. (Illustration by Maxwell Tilse)

He goes on to add, “So, like many Australians who are lucky enough to have the chance, I worked hard and saved up enough money to go backpacking solo for 6 months. I intended to come back to my studies after a year of travel, but I found myself able to make some money from my art and have never gone back.” 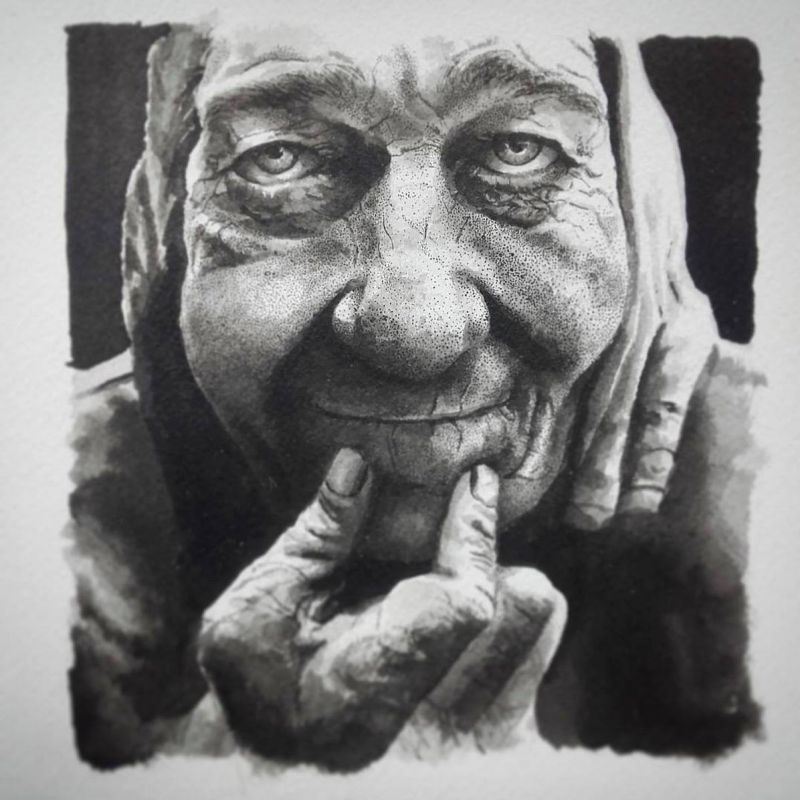 An indian ink and pen portrait. 2015 (Illustration by Maxwell Tilse)

And what about London and settling down there? “It was a big move to London. I met a French girl and she was the main reason that I had decided to leave Australia specifically for the UK. Once here I really loved it and settled in straight away.”

Like most artists, journeys have always played a key inspirational role in Maxwell’s works as well. The young artist who has backpacked solo through Europe, North Africa and the US says, “Each journey always brings so much inspiration. I love to sketch my journey as I go along. Like a diary with comics.”

As for his favourite trip Maxwell says that perhaps he has spent some of his best months in Morocco. 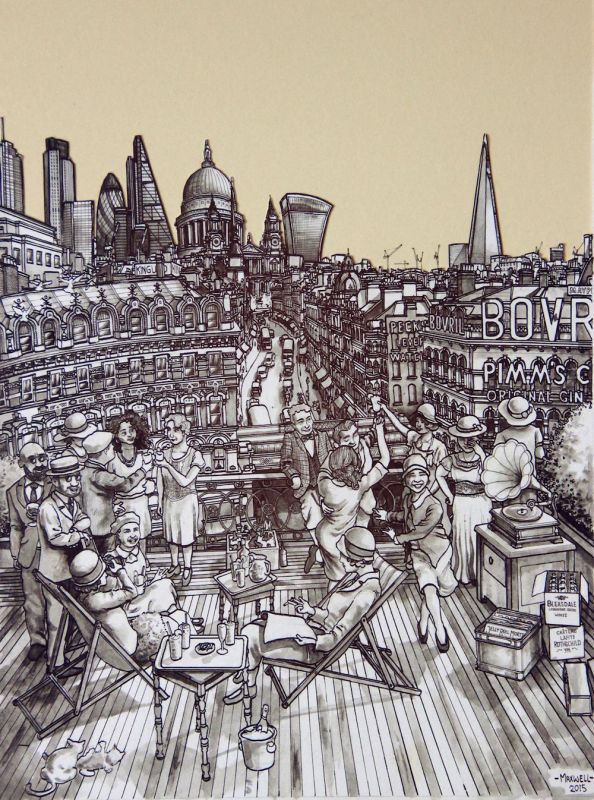 “The country is full of eccentric travellers and opportunity for adventure.”

Speaking about the innate sense of simplicity prevalent in his sketches, Maxwell says, “Well I love the simple. I love the clear crisp line of a pen, which gives my style a simplistic comic feel.” 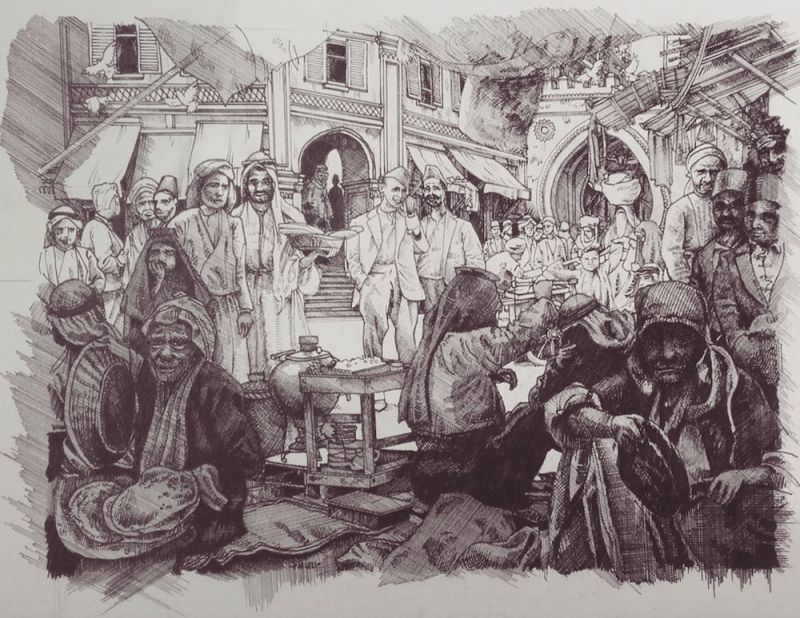 Baghdad Market, 2016 Inspired by some remarkable old photos from Iraq & Syria from the 1930s and 40s. (Illustration by Maxwell Tilse)

He goes on to explain, “That makes sense when you look at my childhood inspirations, Tintin and Asterix, the old French comic artists, these classic illustrative forms, all had clear crisp line work and a good attention to detail.”

The artist who loves the works of Guy Delisle, Tintin, Asterix, Shigeru Mizuki's Showa series and Neil Gaiman's Sandman series as well says that if he is not sketching he will be cooking, meeting friends, reading in the park, visiting art galleries and museums or travelling.

“Whenever I have enough money I go straight to the airport.” 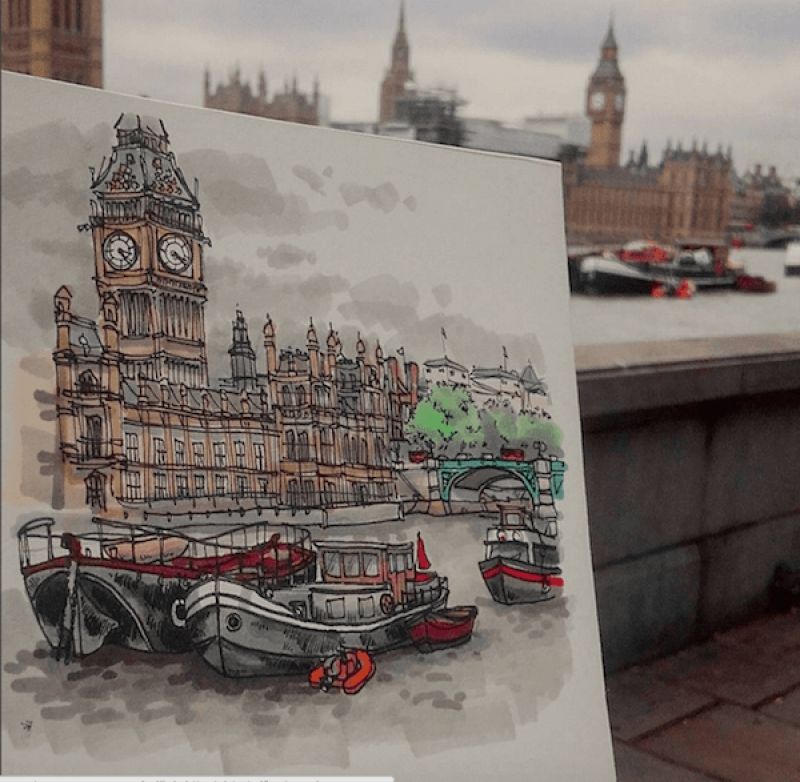 And, as far as his passion for art goes, Maxwell concludes, “I think artists certainly need to find creativity and interest in many things. Most artists I have met are interesting and fun people and we all use art for expression. Each and every one of us can be an artist, the reserved, the outgoing or the eccentric.”