Aswathi Mohan’s art is as bright and vivacious as the artist. The young artist is all smiles as she explains that art has always been a part of her life. “I’ve been drawing and painting since I was two.” However, it is for the first time that Aswathi is presenting an art exhibition titled, Into an Introspection. 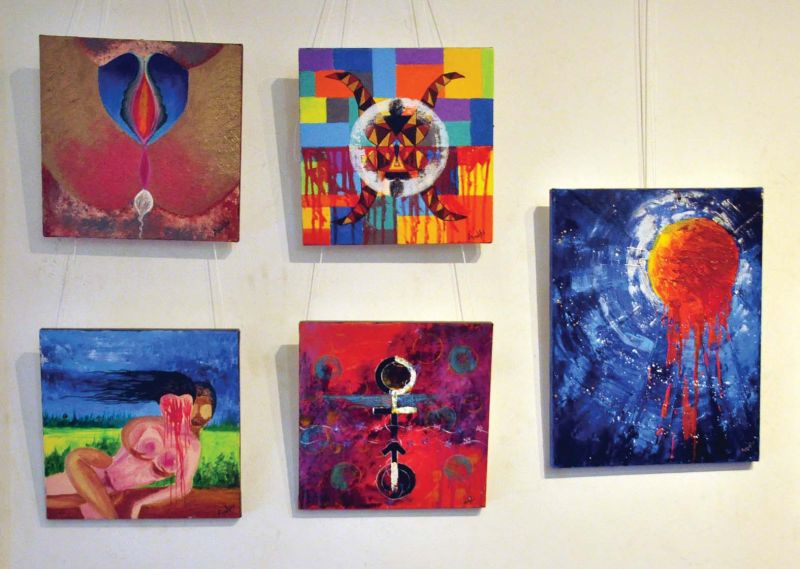 As the title suggests, the artworks are intensely personal and is a third person's view of a life lived. There are 36 paintings on display and they are divided into three parts: Mind, Body and Spirit. Mind features a series of self-portraits. The Body series is marked by lush green backgrounds with a caterpillar growing into a butterfly in the foreground. The Spirit series is the most striking, with black, bright red and occasional flashes of white, and with a decidedly Indian aesthetic. Most of the paintings in this series depict Shiva and Shakti, intertwined so tightly in some, it is impossible to distinguish where one begins and the other ends.

She has never received any formal training in art and says that she tries to train and improve herself through constant practice and by inviting criticism from others. After leaving her job as an architect, a few months ago, Aswathi found herself with a lot of free time that she put to use by drawing and painting. While walking by the gallery one day, the idea for an exhibition hit her. Once she decided to show some of her work, the paintings materialised at a furious pace. Some of the pieces on display, she says, were finished in a single day. “I would be working on one when the idea for another emerges. I had to sketch it immediately and then go back to the painting.”

Art therapy is an avenue that Aswathi finds interesting. The work put into the exhibit, she feels, has been therapeutic and cathartic. “I find solace through art at difficult times,” she says.

The exhibition is going on at Kerala Lalithakala Akademi Art Gallery, Kozhikode and will conclude on May 20.