It was afternoon and dancer Padmini Chettur was busy rehearsing for her three-hour long performance Varnam at David Hall, Fort Kochi. The performance was in connection with the Kochi Muziris Biennale 2016, where Padmini is a participant. “It was Varnam’s premiere,” she says. Although she has learnt Bharatanatyam, Padmini is more into experimenting with dance. Her previous productions Wings and Masks, Pushed, Wall Dancing and Kolam prove that. Varnam is also one such, which talks about abandonment or loss. “I am trying to convey many things through Varnam,” she begins.

“First of all, my idea came with a few starting points. One of which was the growing concern that the larger contemporary dance movement in India seems to have either forgotten the traditions or don’t care about it. There seems to be a kind of mindless adoption of western contemporary practices, bringing it to India and setting up a piece, which I feel doesn’t connect to the country at all,” she says.

The second concern for Padmini was that the Bharatanatyam community itself has become more and more closed within themselves. “I have felt it since the time I started working with dancer Chandralekha in the 1990s. It doesn’t engage with contemporary works. And I hoped that, by taking one of the most iconic pieces from the repertoire — Mohamana Varnam — and radically departing from its form, there’d be some response. Also, the problem in this country with the traditional art is that it seems to be closed off to certain communities.” she says.

“For instance, if you are a North Indian living in Chennai or a Syrian Christian, it is not easy to go for a Bharatanatyam class. There are certain communities in the country which have become so urbanised and westernised that I felt that I wanted to use the process of actually approaching the Varnam itself as a meeting point where this kind of encounter and discussion can take place,” she adds. 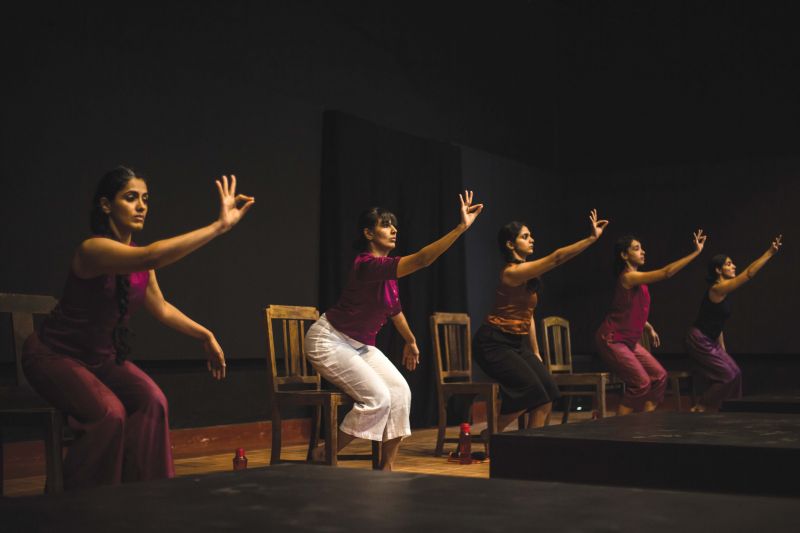 Performance of Varnam in Kochi

Padmini has adopted a unique mode of narration for Varnam. In the Sahithyam part of Varnam, she has taken a popular song and has used the translated text of the song during the performance. “The text is talking about the lover the lord had abandoned for another woman.  She is asking how can you treat me like this. And she is explicitly talking about her longing for the lord. That was the starting point for the emotional ground of the piece,” she says.

Abandonment or loss is the core theme of the performance and Padmini has taken four to five texts by contemporary women writers, which are in tune with the theme. And, the dancers would read the excerpts in between. Besides, she has totally reconstructed the gestural movements in the piece. “In Varnam, you have jathis where you do the nrithya part, which is fully abstract. I have tried to replace the vocabulary of Bharatanatyam with a different physical vocabulary. It treats the body as an anatomical instrument and that part is shown on the dais. All the elements of jathis have  been opened up, reconstructed and reassembled for Varnam,” she says.

Padmini is not worried about the responses. All she wants is to create a new dialogue. But, she is happy about the positive responses she received from Kochi. “Since the performance is three hours long, many people tend to leave in between and hence I don’t get to talk to them much. But, there was a local gentleman who came to watch the performance on two days and his response really pleased me. He found it mesmerising and was happy that he could come and watch it easily as normally these are meant for the elite.”

Though Padmini is a Keralite, it is her first visit to Kerala as a performer. “I had always come to Kerala as a kid during summer holidays,” she says. “My father is from Ernakulam and mother is from Kuttipuram My aunts still live in Kerala. Now, both my parents are no more, I don’t come often,” she adds. But then she gets nostalgic. “I go back to my childhood when I eat bananas here. Certain kinds of furniture remind me of my tharavadu,” says Padmini, who was guided to dance by Mrinalini Sarabhai. “She is my mother’s aunt. When I was small, I used to go to their home to watch television and dance to MGR songs. She found my talent and told my mother to initiate me into dancing. Otherwise, I wouldn’t have become a dancer.” Although Padmini went on to study science, she came back to dance after meeting Chandralekha. Then, there was no return. And, she puts into practice the scientific side by experimenting with dance.