History enthusiasts from the city checking out the exhibition

A gold-rimmed tea set from Czechoslovakia, a pure-silver tea kettle from England and a vast collection of marble and bronze statues primarily from Italy and France. These are just a few of the artefacts on display at the Salar Jung Museum to mark a special occasion — the 130th birthday of the man who had once owned these, the late Nawab Mir Yousuf Ali Khan, also known as Salar Jung III.

For the uninitiated, the Salar Jung family had long served as the state’s Prime Ministers, working alongside the Nizams.

Dr A. Nagender Reddy, the director of the Salar Jung Museum, believes that the exhibition plays an important role in showcasing some really interesting artefacts. “We conduct this exhibition every year, but this being the 130th birth anniversary of the Nawab makes it extra special. The display showcasing his personal collection is a tribute to him and offers an opportunity for us to remember him on this special day,” says Dr Reddy. 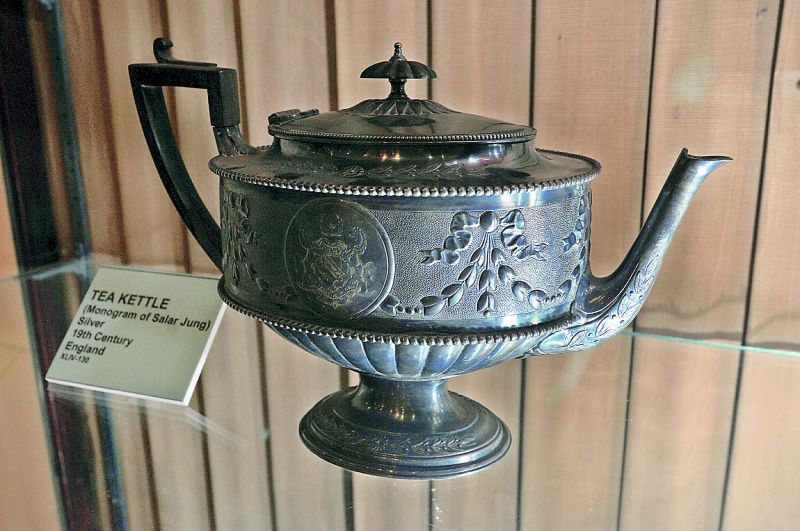 The tea sets and kettles on display at the exhibition were collected by Salar Jung III  from around the world, all the utensils and cutlery carries Salar Jung’s crest, etched with the words, “My trust is in God.”

Curated by Dr G. Kusum, this year’s exhibition primarily focuses on displaying objects collected by the Nawab and those carrying the family crest. The late Nawab’s collection is huge and varied in taste and can be divided into five categories — Indian, European, Middle East, the Far East and children’s collections.

Adding to the storytelling curiosity of the exhibition is a special collection of pictures documenting the Nawab’s life. Speaking about the late Nawab’s influences, Public Relations Officer P. Venugopal explained the role of the Nawab’s grandfather, Salar Jung I, in his life as a collector. “Salar Jung I had bought the famous ‘Veiled Rebecca’ statue during his ministerial period. The statue was famous also because it was sculpted out of a single marble piece by an artist in Italy,” he explained.

The exhibition will be on display till the June 21.