Print-making as a form hasn’t been a very successful art form.

The creative process is a cocktail of instinct, skill, culture and a highly creative feverishness. It is not like a drug; it is a particular state when everything happens very quickly, a mixture of consciousness and unconsciousness: Francis Bacon.

The venue played host to a rare print-making workshop. Print-making as a form hasn’t been a very successful art form. Out of many things that make it a difficult art form, one of it is that it requires a printing press and adequate spaces. The dearth of print making studios in the city also adds to its woes. But the ensemble of artists and print makers present at the workshop-cum-art show was nothing short of stellar. Some of the significant artists were Baiju Parthan, Champa Sharath, Iranna G R, Jayakumar G, Kavita Nayar, Kavita Shah, Laxma Goud, Manjunath Kamath B, Palaniappan Rm, Ravikumar Kashi, Sonal Varshneya, Tejendra Singh Baoni, Viraj Naik, Vivek Vilasini and Walter Emilio D'Souza. The Art centre has been very active since its inception. 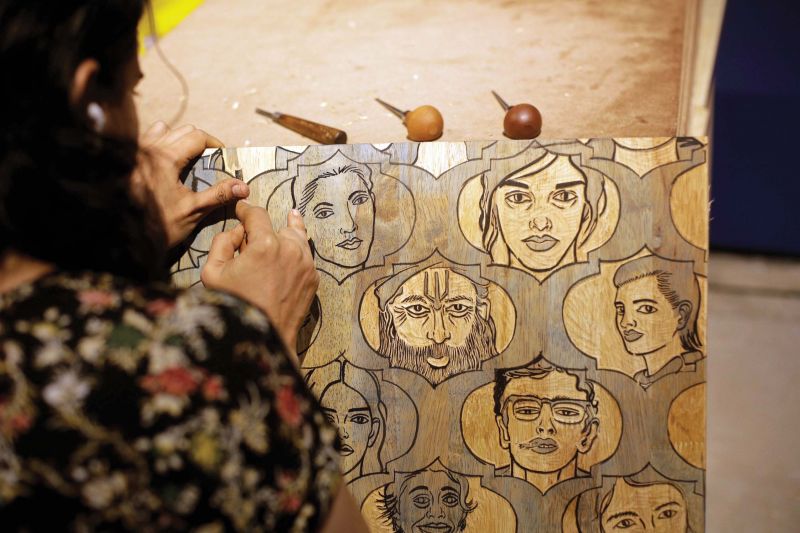 Another atist who is amongst the top contemporary artists in India currentl is, Manjunath Kamath’s artistic zeal to continually explore something new has intrigued him to work in unconventional mediums and discern the potentiality of a material to its highest extent.

Kamath, firstly a storyteller, offers a multi-layered narrative in his visual and tactile endeavours. Padmashree Laxma Goud, the name itself is enough for any art aficionado to strike a connect. In a career spanning more than five decades, Goud has been working in diverse mediums and experimenting with different materials with equal prowess. Bengaluru-based artists Ravi Kashi, Jayakumar G Reddy and Tejendra Singh Baoni did carve out works of immense detail and creativity.

Ravikumar Kashi works diversely in painting, sculpture, photography and installation. His works often combine or cut across defined expectations from these mediums. His idea driven prints are layered and are conceived to connect with the viewer in multiple ways. Baoni, a professor at Chitrakala Parishath, brings dynamic energy and movement into solid forms. Being a sculptor, he also introduces the element of three-dimensionality into his drawings and other surface works.

Jayakumar G Reddy, also a professor, through his paintings and printmaking, constantly evaluates accepted meanings of objects and images weaving newer contexts around them. Programme director Anu Menda says, “Our broad objective is to create and expand international cultural alliances; making art accessible to broader audiences.” Speaking about the art scene in the city, Jaya Kumar says “Bengaluru’s art scene seems to be quite active, though it still has a sense of a direction is yet to be formed and the purpose is yet to be framed or realised, zeitgeist (spirit of the times) is still in a chaos, still hasn't been able to be formed”