Gayathri describes the scene of the family being asked to touch the dead man’s feet for blessings.

The first page begins with news of a death. A daughter, woken up by a call an hour past midnight, takes the trip, to meet her dead dad, with flickering thoughts of a live one who had for long wished for his death. There are no tears, only memories from different years, filling up the pages of a book she writes. It is a memoir she had no plans to write, but Gayathri Prabhu had a strong craving, after her father’s death, to talk to him. “To trace out the words that were buried in my heart,” she writes, in an interview, about the memoir If I had to tell it again.

“The pages became a memoir when I realised how important it is to speak up, unmindful of any shame, stigma or judgment. I wanted to reach out to others like me,” says Gayathri, an author of novels like The Untitled, Birdswim Fishfly and Maya. She teaches at Manipal Centre for Philosophy and Humanities. The teaching, the writing all enter the memoir as unnoticeable lines in the larger story — of a strange pair of father ‘and daughter sharing a disease called depression, one in denial, the other getting treatment, of a dog that loved too much and of death. Gayathri describes the scene of the family being asked to touch the dead man’s feet for blessings. She bends down, touches his feet. In her mind the words form, loud and distinct — ‘I forgive you’. 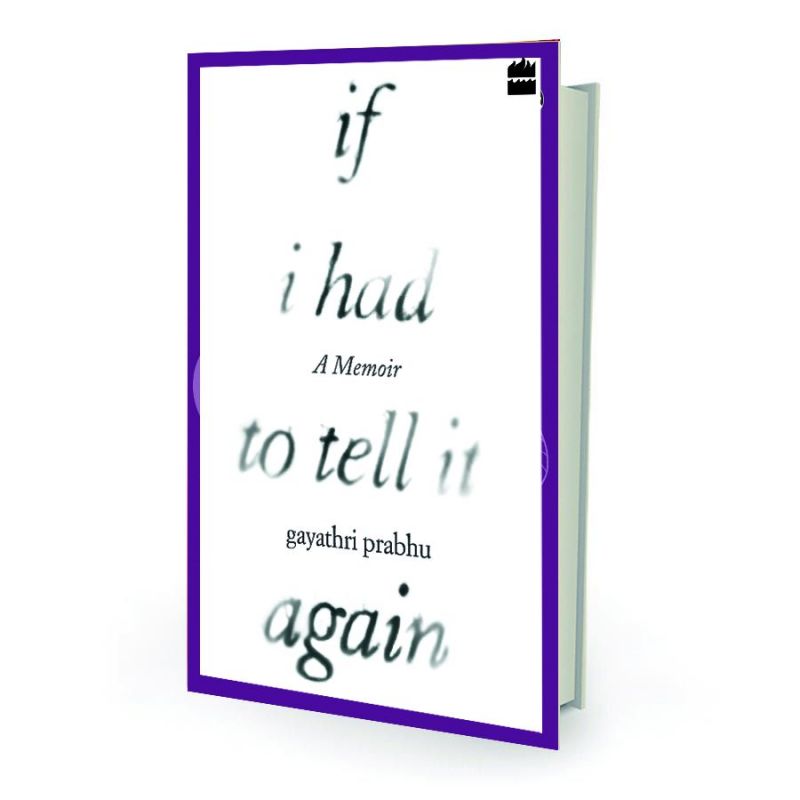 I Had to Tell It AgainGayathri Prabhu, Harper Collins pp.185, Rs299

If you wonder why, before you begin the book, you end up with how could she, after. “It is a good question and I have a long answer — all 185 pages of If I Had to Tell It Again,” Gayathri says. Her childhood was difficult. There was love for the first-born but with love came a lot of suffering. Gayathri doesn’t write as a victim, she passes on the details, sometimes like an outsider watching a home. She switches to the third person and calls herself G. “I was trying to create texture, distance and depth, by switching voices. I was also very committed to the tone of the book — was certain that I did not want to sound like a martyr, a victim, or a warrior — and talking about myself as G, as a character, was one way to retain that tone,” the writer says.

What was most difficult for her to write had been an episode of child abuse, by a relative. She hesitated not out of fear or shame, she says, but because she was unsure how much to tell. She had never told it to her dad and even in the book, she hasn’t told the full story.

The younger sister who went through a loveless childhood, urges her to tell, but Gayathri doesn’t. The sister comes and goes and offers her solace when she goes through phases of depression in her adulthood, in her early 30s. It was her and a dog called Chinna that would spell out all the love in her life. She couldn’t love like she loved Chinna again, Gayathri says, when she ends the chapter where the 13-year-old dog dies.

“I was committed to one strand of my life, something that tied me to my father and also to my dog, Chinna. I put in whatever seemed true to that strand. Everything else stayed out.” Her mom did too. “The book talks about grief, endurance, recovery, empathy and unfinished narratives. My father was always open about his life  and perhaps I have inherited this. The book is a tribute to him. My mother does not want to be written about. I respect that.”

She grieves by writing. “Writing is everything for me. I am my writing. The world makes sense to me  only in the act of writing. For the past three years it has also been my only grieving space.”

Places to Visit in Lucknow